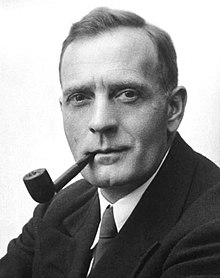 Edwin Powell Hubble (born November 20, 1889 in Marshfield , Missouri , † September 28, 1953 in San Marino , California ) was an American astronomer . He classified the spiral galaxies , dealt with the expansion of the universe and discovered the Hubble constant of galactic cosmology , the redshift of starlight with increasing distance ("Hubble effect"). He is the namesake of the Hubble space telescope .

The Hooker mirror at the Mount Wilson Observatory was used by Hubble to measure the redshift of the spectra of moving galaxies.

Hubble studied physics and astronomy in Chicago and completed it in 1910 with a Bachelor of Science degree . He then left the USA to study law at Oxford , which he completed with a master's degree. After three years he returned to the USA. There he studied astronomy and mathematics in Chicago from 1914 and received his doctorate in 1917.

When Vesto Slipher succeeded in measuring the radial velocity of a spiral nebula for the first time at the Lowell Observatory in Flagstaff (Arizona) in 1912 , Hubble was also studying the relative velocity of the Andromeda nebula (M31) to the Milky Way system as a student . At the Mount Wilson Observatory in 1923 he was able to prove that M31 is far outside our galaxy. He presented the results of his observations and calculations, Cepheids in Spiral Nebulae, to the annual meeting of the American Astronomical Society (AAS) at the turn of the year 1924/25 , at which they were presented on January 1, 1925.

Due to the spatial distribution of other galaxies and their spectrum u. a. The redshift demonstrated by Milton Humason , the Belgian priest Georges Lemaître postulated in June 1927 the expansion of the universe in accordance with Einstein's general theory of relativity . Hubble published two years later with additional data the same linear relationship between the redshift and the distribution of extragalactic nebulae, but did not draw the physical conclusion of an expansion of the universe and suspected a previously undiscovered natural principle behind the redshift. Nevertheless, in the public perception, this discovery is often attributed to Lemaîtres to Hubble.

Hubble and Humason discovered on the basis of Slipher's work that the spectra of different galaxies are not shifted equally into red and blue, but that there are considerably more red-shifted spectra. If the frequency shift is interpreted as a Doppler effect , it can be deduced that almost all of the galaxies observed are moving away from us. Hubble was also the first to establish a directly proportional relationship between redshift and the distance of the galaxies, which would mean that the further away these distant islands of the world move away from us, the faster they are. Hubble himself used the term "apparent speed" because he was reluctant to interpret the observations physically.

The quantity that describes this expansion is named the Hubble constant H in his honor . With their help, the age of the universe can be estimated.

Hubble also developed the Hubble sequence , a morphological ordering scheme for galaxies. On August 30, 1935, he discovered the asteroid Cincinnati .

On September 28, 1953, Hubble died of a stroke at the age of 63 while preparing for several nights of observation at the Palomar Observatory .

Because of the importance of Hubble's research for modern cosmology , the following is an original work in the translation of Jürgen Hamel's History of Astronomy (Magnus-Verlag 2004, pp. 325–327), with links and smaller additions in brackets.

The distribution of the fog

The exploration of the observable space as a whole has led to two results of particular importance: one is the homogeneity of the space - the uniform distribution of the nebulae across the board - and the other is the relationship between speed and distance .

The distribution of the fog in the small is very uneven. You can find individual nebulae, pairs of nebulae, groups of nebulae of various sizes and also fog heaps . The galactic system is the main part of a triple nebula, of which the magellan clouds form the other components. The system of three forms the “ local group ” with some other nebulae […]. Its members provided us with the first distances, and the Cepheid distance criterion is only applicable to this group to this day.

If, on the other hand, one compares large areas of the sky or areas of space with one another, the small irregularities are averaged out and the very even distribution remains on the large scale. The distribution over the sky is obtained by comparing the fog numbers within a selected area, which is evenly spaced across the whole sky, up to a certain limit size of the mean.

The true distribution remains partially hidden from us through local darkening . In the [celestial] region of the Milky Way we do not observe any nebulae, and only a few at its edge [... which is related to the] presence of large dust and gas clouds that are scattered over the entire star system, especially over the galactic plane. These clouds hide the more distant stars and nebulae from us [...]

[…] The nebulae generally show absorption spectra similar to the sun , so that one can assume that the sun type predominates among the nebulae stars. The spectra are necessarily short because the light is too weak to be stretched into a long spectrum. The calcium H and K lines can still be separated. You can also see the G band of iron and some hydrogen lines [...]

Nebula spectra stand out for the strange fact that their lines do not show the position [in terms of wavelength] as one observes with nearby light sources. As has been observed by suitable comparison spectra, they are shifted to the red. The shifts, known as redshifts , increase on average with decreasing apparent brightness. Since the apparent brightness [approximately] measures the distance, it follows that the redshifts increase with distance. Further research shows that the relationship is linear . [...] With this view, one assumes that the nebulae move away from our part of space at speeds that are proportional to their distance [...]