The title of this article is ambiguous. Further meanings are listed under Echelon (disambiguation) .

Echelon is a global spy network operated by intelligence services in the United States , Great Britain , Australia , New Zealand and Canada . The system is used to eavesdrop or monitor private and business telephone calls, fax connections and Internet data conducted via satellite . The evaluation of the data obtained is carried out fully automatically by data centers . The existence of the system is considered certain since an investigation by the European Parliament in 2001.

are involved. Since the 1970s there have been rumors of the existence of a secret espionage system of these organizations. The existence of the network has been confirmed at the latest since the publication of the European Parliament on September 5, 2001.

Presumably, the ancient Echelon battle order was the namesake for this spy network. In the ancient times originated Echelonformation (see Leaning battle ). Echelon formation is a staggered combat arrangement in the English-speaking world today. The flight formation of migratory birds is sometimes called this. Echelon may also come from French "échelle" (ladder, scale, scale, measure, etc.) or "échelon" (ladder rung, level, but also the military relay), or English "echelon" (ranks). An echelon is also an optical grating (diffraction grating).

The term actually refers to the software that searches the captured SIGINT for certain key words in the corresponding listening stations .

The European Parliament assesses the objectives as follows:

“There is also agreement on the aim of the system to intercept private and commercial - and non-military - communications. The Committee notes, however, that the technical capabilities of the system are not nearly as extensive as some media claim […]. The Committee concludes that using the system for intelligence purposes only does not violate EU law; However, if the system is misused to gain competitive advantage, this is in stark contrast to the Member States' obligation to be loyal to the concept of free competition in the common market. "

Press reports previously suspected that Echelon was initially only intended to eavesdrop on the military and diplomatic communications of the Soviet Union and its allies. Today the system is to be used to search for terrorist conspiracies, drug trafficking exposures, and as a political and diplomatic intelligence service . Since the end of the Cold War, the system has also been used for industrial espionage . These allegations were not confirmed by the European Parliament, although individual committee members expressed concerns in this regard.

According to other sources, Echelon is used to circumvent national laws. American intelligence agencies are prohibited from eavesdropping on the phone calls of American citizens. The same is true in Great Britain. Now that the British secret service is listening to Americans and the American secret service is listening to British telephone calls, this ban is being circumvented.

Structure of the system

All members of the Echelon system are part of the UKUSA intelligence alliance , whose roots go back to the Second World War . The member states of the alliance provide eavesdropping stations and space satellites to eavesdrop on satellite , microwave and sometimes cellular communications. According to the research report of the EU Parliament, there is no evidence that the technology also enables large-scale wiretapping of wired communications (i.e. telephone, Internet backbones within Europe, fax, etc.). The detection of the signals is probably mainly by in radomes established antennas, usually a spherical shell, which protects the interior primarily against external mechanical influences such as wind or rain. It is assumed that the signals captured, mainly from satellite communication, are partially evaluated by the National Security Agency (NSA), which has the necessary detection systems.

The spy system was first made known to the public in 1976 by Winslow Peck . On July 5, 2000, the European Parliament decided to set up a temporary committee on the Echelon interception system, and in 2001 a 192-page report was published confirming its existence and explaining its importance and implications.

"The Echelon Committee notes that there can be no longer any doubt about the existence of a global communications interception system operated by the US, UK, Australia, New Zealand and Canada." 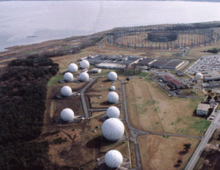 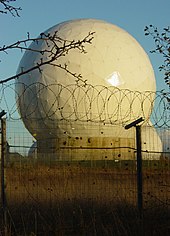 Echelon operates five large stations for monitoring traffic via Intelsat . In Europe there is one in Morwenstow ( Cornwall ) under the supervision of GCHQ for the surveillance of the Atlantic and Indian Oceans. Two stations are operated by the NSA, one in Sugar Grove, West Virginia and one at the Yakima Army Base, Washington state . A New Zealand station in Waihopai and an Australian one in Geraldton complete the chain.

The following locations are suspected:  Map with all coordinates: OSM | WikiMapf1

After the end of the Cold War in 1990, the main enemy, the Eastern Bloc , fell away as a potential opponent. The new intelligence priority, industrial espionage, was introduced by George Bush Sr. established by National Security Directive 67 - issued by the White House on March 20, 1992. Echelon participants are said to have used the freed-up capacities to spy on their own allies in the field of business.

The media have been reporting since the late 1990s that the US secret service NSA had wiretapped the German company Enercon with the help of Echelon in 1994 . The data obtained are the American competitors Kenetech Windpower Inc. were transmitted. According to other reports, the American company had patented the properties in question three years before the alleged wiretapping, which contradicts this theory.

The industrial espionage is also borne out by the testimony of former CIA chief James Woolsey in the Wall Street Journal on March 17, 2000. Woolsey tried, however, to argue that the US was only looking for information on attempts to bribe European companies abroad, because "most European technology is simply not worth theft." Airbus is said to have lost a billion-dollar contract with Saudi Arabia after the NSA found out, presumably through Echelon, that Airbus had bribed the Saudi businessmen to award the contract.

The Echelon base Bad Aibling Station located in Bad Aibling ( Bavaria ) was able to cover large areas of Europe until 2004; As in all cases, however, one could only eavesdrop on communications that were conducted via radio links or satellites; wired communication such as B. the Internet backbones cannot be intercepted with this technology. In the quoted EU report it was stated that the majority of this facility was used for industrial espionage after the end of the Cold War, and it was proposed that it be closed.

Due to the terrorist attacks of September 11, 2001 , this decision was only implemented with a delay in 2004. In his report to the EU Parliament on September 5, 2001, the "rapporteur of the non-permanent EU committee of inquiry on Echelon" Gerhard Schmid once again stated that intra-European communication is hardly affected, but mainly transatlantic satellite connections. As a replacement for the system in Bad Aibling, a system with five radomes stood from 2004 to 2008 on the edge of the former August Euler airfield (also known as the Dagger Complex by the USA ) in Darmstadt , which, according to some sources, is also said to have served for eavesdropping purposes. The plant was completed in spring 2004; in summer 2008 the radomes were dismantled again.

The BND continues to operate the Bad Aibling listening station with the aforementioned telecommunications center of the Federal Intelligence Service . (See also: Cooperation between the Federal Intelligence Service and NSA ). In Bad Aibling there is a liaison office to the US secret service NSA ( SUSLAG , Special US Liaison Activity Germany) and two transfer points, the Joint SIGINT Activity (JSA) and the Joint Analysis Center (JAC).

On April 23, 2015, the media reported again on the extent of the cooperation between the BND and NSA in Bad Aibling. On the basis of an application for evidence by the parliamentary groups, it was investigated how many of the 800,000 selectors ( IP addresses , email addresses, telephone numbers, geographic coordinates , MAC addresses ) were directed against German and European interests.