The title of this article is ambiguous. For household appliances, see microwave oven

Microwaves is a trivial name for electromagnetic waves with a frequency of 1 to 300 GHz, which corresponds to a wavelength of approx. 30 cm to 1 mm. Other references give broader limits to the frequency range, from 300 MHz to around 1 THz, i.e. H. Wavelengths from 1 m to 0.3 mm. The frequency range of microwaves thus includes parts of the decimeter wave range as well as the centimeter and millimeter wave range . At its lower end, i.e. H. towards lower frequencies, the range of radio waves joins, and towards the top, the infrared range of the optical spectrum. When the term was formed, the submillimeter waves were not yet known (or were still assigned to the infrared range); they are therefore often not included in the term. 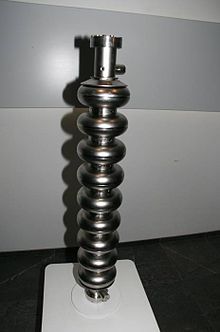 Superconducting cavity for accelerating electrons and positrons ; Length of the structure approx. 1 m; Each chamber has a resonance frequency of 1.3 GHz.

The heart of the acceleration systems for electrons in particle accelerators are cavity resonators for microwaves. Inside, the electric fields of standing electromagnetic waves accelerate the charged particles. Electric field strengths of more than 40 million volts per meter can now be achieved there. The length of a single cell is chosen so that the electric field of the wave just reverses when a particle that flies almost at the speed of light enters the next cell.

In nuclear fusion reactors with magnetically confined plasmas, microwaves are used to supply energy to the plasma by means of cyclotron resonance heating .

Use as a weapon

According to the 2nd hazard report of the Protection Commission at the Federal Ministry of the Interior , "in the military field the operational capability as a radiation weapon" against electronic systems is "already established". Furthermore, there is considerable terrorist risk potential:

“Increasing attention is to be paid to the so-called HPM sources (HPM weapons) (HPM: High Power Microwave), (…) The abbreviation HPEM (HPEM: High Power Electromagnetics) is also often used. (…) In contrast to NEMP weapons, HPM weapons can be manufactured relatively easily by civilians from commercially available components and used for sabotage or blackmail purposes. In this context, there is already talk of "electromagnetic terrorism", which can endanger public order. Similar weapons are already operational in the military sector. "

The German arms companies Rheinmetall and Diehl have been cooperating since 2003 in developing such weapon systems for military and civil applications. They already have “specific development orders” and “within the next two years (...) the first products can be on the market.” Diehl also offers systems “the size of a suitcase” .

According to older reports (cf. e.g. Active Denial System ), the operational capability against persons, both in the military and sovereign areas, has also existed for decades and is also being further developed for the private sector in the form of portable "blood boilers" . The same applies to “production from commercially available components” and thus enables targeted aggression and terror , including the organized terrorist sector. In 2002, 150 criminal proceedings were reported in this regard.

Because of their wavelength, microwaves are particularly suitable for exciting dipole and multipole oscillations of molecules. This effect is particularly clear when vibrating water molecules in a microwave oven. The heating of water is not based on absorption at a certain resonance frequency , but rather the water molecules, as dipoles, constantly align themselves with the electromagnetic alternating field, with heat being generated as dielectric loss. The frequency used in microwave ovens is 2.45 GHz. This achieves a good compromise between absorption and penetration depth into the food. For comparison: the lowest resonance frequency of the free water molecule is 22.23508 GHz.

The dielectric loss factor , the specific electrical resistance and magnetic losses determine the frequency-dependent absorption of the microwaves on or in substances and thus their heating.

Microwaves are electromagnetic waves. Similar to visible light, they can be reflected and refracted and also interfere . They are reflected by metals and electrical conductors and only slightly absorbed . However, suitable insulators (e.g. some thermoplastics, especially Teflon ), glass, many ceramics and mica are permeable (transparent) for these waves and only absorb them slightly. B. optically opaque plastic lenses can be used to focus microwaves. Like light, coherent radiation can also be generated with microwaves by means of stimulated emission. Such microwave lasers are called maser .

Spread in the atmosphere

Electromagnetic waves above a frequency of around 1 GHz are increasingly difficult to transmit with a coaxial cable , since the losses in the dielectric increase with the frequency. The mode of transmission changes fundamentally if the inner circumference of the coaxial shielding is smaller than the wavelength to be transmitted because undesired waveguide modes then occur. For this reason, microwaves with a sufficiently short wavelength are guided in waveguides , since they have lower losses. Special end pieces , so-called wave sumps, are used to close off waveguides with as little reflection as possible .

Special information about the microwave oven

The entrance window for microwaves at the top of the cooking space of a microwave oven is typically formed by an optically opaque window made of very heat-resistant mica. Conversely, the oven door should be as optically transparent as possible to allow a good view and yet enclose the microwaves tightly. This is achieved by a black lacquered perforated sheet (inside covered with a heat-resistant plastic film so that it is water-vapor-proof) with sufficiently fine perforations with typically 2 mm grid dimensions plus a transparent plate about 2 cm from the outside. The tightness of the door with respect to the door opening is achieved via a flat gap less than 1 mm wide and more than 1 cm deep. Microwaves with a wavelength of 12 cm (at 2.45 GHz) cannot penetrate these fine pores or narrow gaps. The magnetron is sealed to the waveguide in the sheet metal housing by means of a flat ring made of fine, crimped metal wire and pressing.

Very high power microwaves are generated by time-of- flight tubes such as klystrons , traveling wave tubes or magnetrons . In the case of low powers, Gunn diodes are preferred for fixed frequencies and backward wave oscillators for large frequency ranges.

Microwaves are very well absorbed by ferrites , which is why they can be used as a wave sump . Some military aircraft , ships or armored land vehicles are therefore provided with an appropriate coating ( stealth technology ) to protect them from being localized by radar .

Substances containing water absorb microwaves much better than dry substances. This is used in the microwave oven .