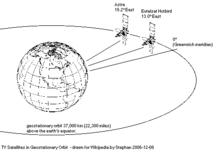 With satellite broadcasting or satellite television , radio programs , in particular television programs, are transmitted to the receivers via satellites .

Of the 34.83 million German households , 17.5 million have (ie about 50%) directly via an individual antenna or a community receiving system with its own satellite receiver ( " DTH ").

As early as 1928, the Austro-Hungarian space travel theorist Herman Potočnik published the geostationary position in a narrow strip above the equator , on which satellites seem to stand still at an altitude of 35,800 km.

In 1965, what was then the USSR launched the Orbita transmission system. It was fully available with 25 satellites from 1967. The satellites broadcast in the range of 3.4–4.1 GHz (television) and 0.8–1.0 GHz (telephony). The uplink took place from Moscow and was distributed via the various satellites, which at the same time reflected the program back to the earth's surface. Either a television program or around 100 telephone connections could be transmitted . In order to ensure the best possible coverage of the more northerly parts of the Soviet Union, the satellites did not use a geostationary but a so-called Molnija orbit . In 1976, the Ekran satellite, the world's first satellite television for private households, was introduced in the Soviet Union .

In efforts to use a geostationary orbit for radio transmission, a global radio satellite plan was adopted at the World Radio Conference (WARC) in Geneva in 1977. As of January 1, 1979, a 15-year agreement was in effect, which allocated five channels for television / radio to each country on a satellite position . Each country should then share the respective position with up to eight other countries (and thus satellites). These satellites should then be positioned in the orbital position at a distance of 6 ° above the equator. A common satellite position (19 ° West TV-SAT ) has been assigned to Belgium , the Federal Republic of Germany , France , the Netherlands , Italy , Luxembourg , Austria and Switzerland .

The Federal Republic of Germany and France signed a framework agreement in Bonn on October 2, 1979 for the construction of two state direct television satellites ( TV-SAT ), while Luxembourg decided on a non-state, private project (the SES Astra ).

In 1982 the "European Telecommunications Satellite Organization" ( Eutelsat ) was founded in France as an intergovernmental organization with the aim of building a satellite-based telecommunications infrastructure for Europe. Eutelsat satellites (at that time only equipped with a comparatively low transmission power) were not planned for direct TV reception, but were intended to serve as feeders to terrestrial radio stations and cable TV systems.

In 1984 the German ZDF , the Austrian ORF and the Swiss SRF jointly decided to broadcast 3sat via satellite. On December 1, 1984, 3sat began broadcasting via the Eutelsat I-F1 (ECS-1) satellite.

In 1985, however, new, inexpensive, low-noise HEMT LNBs came onto the market, which initially enabled ambitious hobbyists to receive the Eutelsat ECS 1 (orbital position 13 ° East) directly in private households with reasonable effort. A few years earlier, this seemed unrealistic, at least in Europe, as the following assessment published in 1975 shows:

“The last step in the use of satellites is the so-called direct supply of a sufficiently powerful transmitter in the geostationary satellite with directional radiation to the earth for reception via suitable house antennas. This fascinating technology is still problematic and lies at the limit of what is physically and technologically possible. It requires additional effort at the receiving location and raises legal problems because of the co-irradiation of neighboring areas. But it will be tried out, and if it is successful, it will also be used, but probably first in other parts of the world outside of Europe. "

The direct reception was not without controversy at first. The individual satellite reception systems had to be registered with the authorities, which then charged an ongoing fee.

Finally, SES Astra helped satellite television achieve a broad breakthrough in Europe with its medium power direct reception satellites. At the beginning of the 1990s, the German Federal Post Office demanded that Astra LNBs be equipped with an additional filter at the entrance, "because otherwise your own terrestrial radio links could possibly be disturbed". This fear later turned out to be unfounded; possibly this demand was simply a protectionist measure.

Starting in 1994, a digital transmission path ( DVB-S ) was introduced for pay-TV offers in parallel to analogue satellite television . The mainspring for this were pay TV channels like DF1 . Leo Kirch took high financial risks by promoting his digital d-box , DVB-S finally became popular due to its quality and capacity advantages, which finally led to the so-called analogue switch - off on April 30, 2012 .

On August 19, 2005 at 2:44 p.m., ARD put the so-called radio transponder into operation on the Astra 19.2 ° East satellite . Since then, practically all German public radio programs on ARD can be received in very high quality. It is broadcast in the DVB-S standard.

Since the carrier-to- noise ratio (CNR) is very low in satellite transmissions - typically 10 to 18 dB - (the useful signal to be transmitted is only slightly above the background noise between transmitter and receiver), the signal is usually more resistant to interference with analog transmission using frequency modulation made; In the case of digital transmission, only modulation methods such as 4-PSK, 8-PSK, 16-APSK and 32-APSK are possible. Current satellites use 4-PSK or 8-PSK and thus a symbol rate of 2 or 3 bits per symbol.

The spectral distribution of a frequency-modulated FBAS signal in analog transmission is somewhat unfavorable, so that in poor reception conditions, images with low color saturation can still be transmitted well, but images with intense red tones tend to have so-called "fishy" (black and white smears).

The analog D2-MAC process developed in the 1980s , which works without a color subcarrier, is much more robust in this respect, even if that was not the primary development goal. It was particularly popular in northern countries.

The reception problems could be completely overcome with the error correction method of the fully digital television technology DVB-S .

Section of the spectrum of a television satellite signal

The individual transmitters are lined up with a channel grid of 29.5 MHz, as with the Astra 1F. The bands of horizontal and vertical polarization are each shifted by half the channel grid. In the low band (10.7–11.9 GHz) there were mainly analogue transmitters whose signal was modulated with FM. Nevertheless, there are individual digital signals (DVB-S) that z. B. be modulated with an 8-PSK. The adjacent picture shows a recording of the spectrum (already after the LNB, horizontal polarization) from 1453 to 1653 MHz. Of the 7 covered channels, 5 analog (marked blue) and 2 digital (red) can be seen.

Time delay of the broadcast signals

Since the signals from the television transmitter to the satellite and back to the viewer must be sent, there is a delay between 239 ms (equator) and 270 ms (70th degree of latitude) compared to the transmitted signal.

This delay, which is also present with analog reception, increases further with digital reception by the following measures:

The usual delay times for digital satellite reception are therefore one to five seconds.

The radio and television signals are sent to the satellite by an uplink station on uplink frequencies of 12.75 - 13.25 GHz, 13.75 - 14.5 GHz and 17.3 - 18.1 GHz. A separate transmitter unit with parabolic antenna is used for each transponder . These are located in uplink stations that either belong to the satellite operator who carries out the uplink for its customers there, or the customers (broadcasters) carry out the uplink with their own systems. This is particularly worthwhile for large broadcasters that use several transponders, because it saves the transmission route to the satellite operator's uplink station. 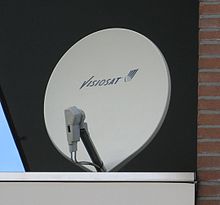 Basically, the signals are converted during satellite reception in the controllable active part of the parabolic antenna (LNB). Since a coaxial cable has a very high attenuation at the high satellite frequencies in the SHF range, the LNB converts the signals to the lower SAT IF frequencies (950–2150 MHz).

Satellite radio, radio reception via a satellite, is available independently as digital radio or as a "subtenant" for satellite television.

In Europe, only very few private radio broadcasters can be received via satellite. Local or regional private broadcasters, which are often market leaders in their broadcasting areas, consider the very expensive Europe-wide broadcasting to be uneconomical. Program providers often transmit their programs via satellite only for the signal feed of the FM transmitter. The situation is different in sparsely populated areas. In the USA, the SiriusXM company offers radio reception via satellite. The fees average $ 15 / month. In cities where high-rise buildings shade the signals, pseudolites sometimes take over the signal transmission.

In the Ku-band you need a satellite dish, an LNB and a satellite receiver for reception . In the L-band, an antenna integrated in the receiver and line of sight to the satellite are sufficient. Hundreds of German and European channels can be received free of charge via satellite. However, there are also some pay radio providers who offer various stations with special types of music for subscription.