The title of this article is ambiguous. Further meanings are listed under All Souls (disambiguation) . 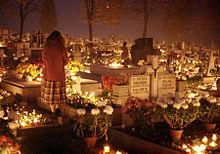 Decorated All Souls Cemetery in Oświęcim (1984) 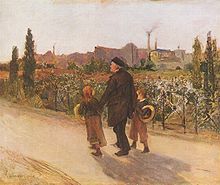 On All Souls' Day ( Latin [Dies] in commemoratione omnium fidelium defunctorum , "Day of Remembrance of All Deceased Believers") the Roman Catholic Church commemorates the dead. The remembrance of all souls is celebrated on November 2nd of the church year , one day after the solemnity of All Saints' Day . Through prayer , intercession , alms and cemetery walks, people remember all poor souls in purgatory and give them indulgences . In the Roman Catholic Church, the All Souls Indulgence has a special meaning.

Where the grave blessing has not already taken place on the afternoon of All Saints 'Day, it takes place on All Souls' Day, where it actually belongs.

In Austria Allerseelen is not a public holiday, but there are no classes in public schools and at some universities there are no lectures.

All Souls Day on November 2nd goes back to Abbot Odilo of Cluny ; he introduced this day of remembrance in all of Cluny's dependent monasteries . Odilos' decree from 998 is still preserved. Soon All Souls Day was also celebrated outside the monasteries. It is attested for Rome since the beginning of the 14th century. From Cluny, All Souls Day spread throughout the Latin Church . Theologically it is closely related to the doctrine of purgatory (place of purification, purgatory) as a place of purification for the deceased who receive help from the living through prayer, fasting and alms. All Souls Day is associated with numerous folk customs , especially in the Alpine countries .

As a result of the reform of the Roman Catholic liturgy after the Second Vatican Council, All Souls' Day was put on an equal footing with the solemn feasts of the Lord in the liturgical order of precedence , and in the years when it falls on a Sunday, it is replaced by the Sunday of the year . The liturgical color in the remembrance of all souls is black or purple; no Gloria is sung in Holy Mass ; the hallelujah call is replaced by a tract or a call to the gospel without hallelujah .

The Missale Romanum offers three different proprias for All Souls Day , since a priest could traditionally celebrate Holy Mass three times on this day - like at Christmas. The liturgy of Holy Mass also included the sequence of the hymn Dies irae ; Since the liturgical reform , this hymn can be used ad libitum in the liturgy of the hours ; in the extraordinary form of the Roman rite , the sequence continues to belong to the proprium texts of the Mass liturgy.

The rite of the blessing of the graves is a sacramental and liturgically belongs to the pious exercises (pia exercitia) . It can be performed by a priest , a deacon, or a lay person appointed by the bishop .

Remembrance days for the dead in other denominations

In the Independent Evangelical Lutheran Church , the day of remembrance of those who have fallen asleep can also be celebrated on November 2nd. In the Protestant church, the deceased is remembered on eternity Sunday.

In the New Apostolic Church , a divine service is celebrated three times a year in memory of the deceased . The services take place on the first Sunday in July, March and November. This regulation has been in effect worldwide since July 1954.

According to old popular belief, the souls of the deceased on All Souls' Day rose from purgatory and rested for a short time. Therefore, in many regions, especially in southern Germany and Austria, there are sandwiches such as All Souls bread, braids and the like. These were placed in special places for the souls, mostly in the graves.

In many places, including the British Isles, there was a custom whereby poor children could beg for All Souls' cakes , so-called "souls". The assumption is that this custom came to America via Irish emigrants and that this is where the roots of the motto “trick or treat” lie.

The so-called burning of lights was also a custom associated with All Souls and Purgatory. It should benefit the souls in purgatory. In the Mainz area, the burning of special candles, the Newwelinge, is part of the All Souls' tradition.

The Mexican festival of the dead, Día de Muertos , emerged from a mixture of indigenous traditions with All Souls Day.