This article describes an event in the life of Christ. For the picture of the same name by Andrea del Verrocchio see Baptism of Christ (Verrocchio)

Icon of the baptism of Jesus

The baptism of Jesus is in the Gospel of Mark (1.9–11 EU ) at the transition from the sermon of John the Baptist to the time of the public ministry of Jesus of Nazareth . In the two other synoptic Gospels , the stories of the birth are also placed in front ( Mt 3 : 13–17  EU ; Lk 3: 21–22  EU ). The evangelist John also indirectly addresses the baptism of Jesus in Jn 1 : 29–34  EU . It is also mentioned in the apocryphal Gospel of Hebrews .

The baptism of St. John symbolized the forgiveness of sins and called the baptized to repent because of the closeness of the kingdom of God . This contrasts with Jesus' baptism with his acclamation as Son of God . Even the subordination of Jesus to John connected with the act of baptism, perhaps also a longer period of discipleship of Jesus, was already found offensive by early Christians . Therefore the event itself is considered historically secured ( difference criterion ). The Latin Church celebrates the festival on the Sunday after January 6th.

Baptism of Christ, miniature from the Hitda Gospel Book , around 1020

Baptism of Jesus, detail from the winged altar in the parish church of Usterling , around 1500. Work from the environment of Hans Leinberger . The artist relocates the scene to the real natural monument Growing Rock in Usterling.

According to Jn 1.28  EU , Bethany on the Jordan is usually accepted as the place of baptism , today an archaeological site of al-Maghta . According to Joh 3:23  EU , John also baptized in Αἰνών ('Aenon' near Salim), which was later called Σαπσαφάς ('Sapsaphas'), and which, according to the mosaic map of Madaba, was on the east bank of the Jordan across from Bethabara. According to Origen , however, Bethany was also on the eastern side of the Jordan.

In view of the coming judgment of God and the return of the Messiah, John the Baptist called for repentance and baptism as the forgiveness of sins. “Baptism of repentance” in Mk 1,4  EU can, however, also mean God's turning away from a punitive intention, according to Jer 18,7–10  EU and the Sibylline oracles 4: 152–170 from the 1st century AD (in a Jewish insertion into the Hellenistic political oracle). The baptism of the Qumran community also emphasized God's initiative. Even when repentance is related to the recipient of the baptism, the baptism of St. John symbolizes the baptized's positive response, not a “human decision in a context of repentance and the pursuit of virtue”.

All four Gospels describe the appearance of the Baptist with a quote from the prophet Isaiah: “A voice calls out: Prepare a path for the Lord through the desert! Build a level road for our God in the steppe! ”( Isa 40,3  EU ). Jesus also came to him to be baptized. As Jesus got out of the water, according to the presentation of the Gospels, he saw heaven opened and the Holy Spirit descending in the form of a dove . At the same time he heard a voice from heaven calling him "his beloved son".

Mark 1.9–11  EU can be viewed as a biographical legend, or as a cult legend in the context of early Christian baptism. However, Mark separates the here and now (verse 9) and the otherworldly sphere (verses 10-11). In the revelation of the sonship of God, the Baptist stands apart. He is neither an ear-witness nor does he ordain a Messiah. Nor can the text be understood as a psychological story or vision of a vocation.

Despite the legendary-theological design and the reference to John without mentioning the baptism of Jesus in Acts 10: 37f. EU and 13.24f. This is considered to be one of the most certain events within historical Jesus research : For the followers of John the Baptist, baptism could mean that Jesus subordinated himself to John, which was more of a burden for the Christian communities to preach Christ. But the fact of baptism could not simply be concealed either. Jesus, like John, preached repentance; but while John saw the coming of the Messiah under the sign of judgment, Jesus saw the rulership of God under the sign of love and mercy.

Contrary to Mark’s presentation of only a short contact during baptism and the subordination developed apologetically in the other synoptic gospels, a longer period of time with John is often assumed today as his disciple. Sociologically, the origin of the Jesus movement is then seen in the Anabaptist circle. A baptismal activity of Jesus, reported only in Jn 3,23  EU and 4,1 EU , is less certain .

The baptism of Jesus in the Jordan, depiction from the Hortus Deliciarum by Herrad von Landsberg , around 1175

The baptism of Jesus is interpreted by some church fathers as an anticipation of his death and the descent into the underworld: “The descent of Jesus into this liquid grave [of the Jordan], into this inferno that completely surrounds him, is thus the prefigure of the descent into the underworld: 'He descended into the waters and bound the mighty.' ”(Cf. Lk 11:22  EU ), says Cyril of Jerusalem . John Chrysostom writes: “Immersion and emergence are images of descent into hell and resurrection.” The “descent” of Jesus in his death on the cross was understood, in accordance with Jewish ideas, as a mythical battle with the evil dragon: it led “to the abyss hell to fight the dragon for life and death ”. Cyril of Jerusalem wrote: “According to Job (40.18 EU ) there was the dragon (= Leviathan ) in the waters , who took up the Jordan with his mouth. Since the heads of the dragon were to be smashed, Jesus went into the water and bound the mighty one. "

One can see an anticipation of his death and resurrection in Jesus' going into the water of the Jordan, submerging and rising, the heaven open and the heavenly voice that Jesus heard . John's baptism of repentance included confessing guilt and asking for forgiveness. When Jesus submits to this rite, he places himself - anticipating his death - in the ranks of sinful people, as "Yes to the whole will of God in a world marked by sin" and "an expression of solidarity with the people who have become guilty, but reach out for justice ”.

The theology of the sacrament of baptism is by Paul continued in this direction and unfolds: the baptized receives in baptism share in the death and resurrection of Jesus and reached a "new life" in communion with the Church (cf.. Roman letter , chapter 6 EU ).

Feast of the baptism of Jesus in the church year 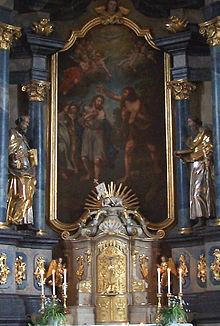 Depiction of the baptism of Jesus on the high altar of the Church of St. John the Baptist in Mönchberg

The event is celebrated in the liturgical year of the Catholic Church as the feast of the baptism of the Lord . The Baptism of the Lord was in the church year of the Latin Church since early times besides the Adoration of the Magi and the Wedding at Cana , the second of three hard secrets of the Solemnity of the Epiphany of the Lord and was at its Octave , January the 13th, especially considered. The liturgical reform of the Second Vatican Council moved the festival after the abolition of the octave of this festival to the Sunday after the Epiphany, where it marks the end of the Christmas season . Often in the Holy Mass of the feast of the baptism of the Lord, baptism is donated or one's own baptism is commemorated in baptismal memory . It is the custom in the Vatican for the Pope to celebrate mass on the feast in the Sistine Chapel and to baptize numerous children. In the ordinary form of the Roman rite , this Sunday is considered the 1st Sunday in the annual cycle and the week following it is the 1st week in the annual cycle.

In the Eastern Churches , the feast of the holy theophany of our Lord, God and Savior Jesus Christ ("Divine Apparition") is usually dedicated to all three festive secrets, including the memory of the baptism of Jesus in the Jordan River, and connected to a water liturgy, the Great Consecration of Water . Only the Armenian Church still celebrates the interconnected birth, apparition and baptism of the Lord on this date.