Comparison of two versions in Mediawiki 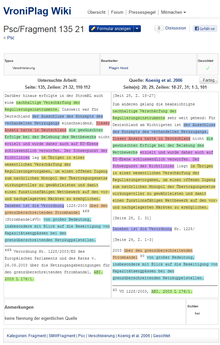 A synopsis or synopsis , less commonly also synoptic ( ancient Greek συνοπτικός synoptikós 'seeing the whole thing together' to σύνοψις sýnopsis ' synopsis ', 'overview'; from συν syn 'together' and ὄψις ópsis 'overview'), is a summarizing and comparison of similar data and texts in two or more documents. The term synoptic is common in meteorology.

In literary studies and related fields such as biblical studies (see below ) a synopsis shows in columns or tables next to each other whether certain topics are recorded differently in the sources used and what differences exist. In a synopsis you can see different versions of a similar text at a glance side by side and do not have to take them from two or more books. This makes comparative studies easier.

A synopsis is also used in biblical research. It is of particular importance for biblical exegesis in the field of gospel research. The first three Gospels of the New Testament - namely those according to Matthew , according to Mark and according to Luke  - have so much material in common that a synoptic comparison offers itself to compare their similarities, similarities and differences. In gospel research, these three are therefore also called synoptic gospels and those three evangelists the synoptics . The parallel arrangement of the synoptic gospels is briefly referred to as the synopsis , the problem of their precise relationships to one another as the synoptic question .

It was the publication of the Gospel Synopsis by Johann Jakob Griesbach , published separately in addition to his critical edition of the New Testament, in 1776 that established the synopsis as an indispensable tool in gospel research. In addition to synopsis in Greek, there are now editions in modern languages ​​(e.g. English, Italian) as well as those that include all four Gospels - including the one according to John , e.g. B. Kurt Aland 1963, Bernard Orchard 1982/83, Angelico Poppi 1990 - and not only printed versions, but also a large number of Internet editions. Almost all gospel synopses present the texts to be compared in vertical columns.

Gospel synopses should not be confused with gospel harmonies. The former enable the synoptic comparison of the individual Gospels, with each Gospel text strictly receiving and keeping its own column; the latter, on the other hand, process the canonical Gospels into a mixed text with different parts, and try to present a single version in a harmonized way.

The synopsis is used in practice in organizational theory (for example problem analysis), as a learning and working aid during studies (for example interdisciplinary analysis of certain learning material), in research (for example comparison of different statements in expert reports on a problem or in the context of the Case-based evidence method ), in politics (comparison of the parties' election manifestos on a specific topic).

In film production , the term synopsis describes a short, concise summary of the storylines and outlines their main characters as well as the premise, conflict and goal of the narrative.

The synoptic meteorology is the part area of weather observations ( weather data , weather data , climate data produced) an overall monitoring of meteorological factors and building created on forecasts. A synopsis (or synoptic) is the basis of the weather forecast .

Synopses are also common in law . If a law is changed, a comparison of the old and the new version in the case of legislative amendments quickly shows what the changes are. This form is chosen especially in the case of extensive changes to laws. Otherwise, a decision on measures would be more likely.

The manual of legal formality defines legal and editorial requirements. To make it easier to comply with these requirements, an add-in for Word called eNorm has been offered since 2005 .