Histamenon of the young Basil with his foster father Nikephoros II. Phocas

. Basil II of the Bulgarians Slayer ( Greek Βασίλειος ὁ Βουλγαροκτόνος Vasilios o Vulgaroktónos , Bulgarian Василий Българоубиец Vasily Balgaroubiez * 958 in Didymoticho ; † 15. December 1025 in Constantinople Opel ) was 976 to 1025 Emperor of the Byzantine Empire . His reign is widely considered to be a highlight of Byzantine history. He came from the Macedonian dynasty .

Basil was probably born around 956, but the sources are not clear. He was the eldest son of Romanos II , who made him co-emperor in 960. His mother Theophanu ruled after his death in 963, initially with the help of the eunuch Joseph Bringas , but soon had to make way for the successful general and later (co-) emperor Nikephoros Phokas . He married Theophanu and, as regent, ran the affairs of state for the underage Basil and his brother Constantine . Throughout his youth, Basil was in the shadow of Nikephoros and his successor as (co-) emperor and regent, General Johannes Tzimiskes .

Shortly after the death of Johannes Tzimiskes there was an uprising of the Bardas Scleros , but it was quickly put down. In 985, Basil ousted his great-uncle Basil Lakapenos and took over the government. He officially ruled together with his younger brother Constantine, but since he preferred to indulge in amusement, Basil can be regarded as the sole ruler.

Shortly after the seizure of power there were renewed rebellions of the Bardas Scleros and Bardas Phokas as well as an uprising of the large landowners (987-998) who feared for their privileges. The baptism of Vladimir I of Kiev (989) as a prerequisite for the Christianization of his empire also fell into this phase ; he married Basil's sister Anna and converted to the Greek Orthodox faith. In return, he supported Basileos with troops, the so-called Varangian Guard .

Fight against Bulgarians and assertion in the east 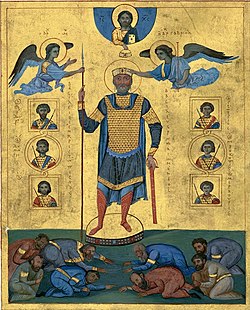 Basil in the armor of a general, with eight figures at his feet in submissive prosksynesis . Replica of an illumination from a psalter, 11th century, Cod. Marc. gr. 17, fol. 3r.

From 989, Basil's position was secured internally. In this way he was able to turn to an enemy who kept him in suspense for the next 25 years, the Bulgarian Empire, which had repeatedly brought the Byzantine Empire into distress over the previous three centuries. The emperor had made the acquaintance of the Bulgarians at a young age and they kept causing him difficulties. Basil was determined to put an end to the Bulgarian Empire. To this end, he fundamentally changed the way of waging war : in the past it was not possible to pursue the Bulgarians, who relied on a kind of partisan tactic, in the mountains because defeats had previously been the result. However, through the reorganization of the army , mercenary troops and new tactics , Basil succeeded in bitter battles to crush the Bulgarian Empire.

After initial defeats and a 15-year, bloody war, the army of Tsar Samuels of Bulgaria was defeated in 1014 in the battle of Kleidion in the Strymontal (Struma) near Petritsch ; the survivors - around 14,000 in number - were blinded . Tsar Samuel allegedly lost his mind at the sight of the blinded and died shortly afterwards. From now on Basileios was called Bulgaroktónos (Bulgar killer, butcher). He also struggled after the death of Samuel successfully against the Bulgarian Empire with its successors, the tsar Gavril Radomir (1014-1015), Ivan Vladislav (1015-1018) and Knjaz Presian II. In 1018 fell to Caesar the Bulgarian capital Ohrid and in you kept Bulgarian royal treasure in your hands. Maria, the widow of Tsar Ivan Wladislaw, was also given to Basil with her children in Ohrid. Bulgaria was incorporated into the empire, with which the Byzantine border shifted far to the northwest.

After the conquest, Basil II reorganized the Bulgarian Orthodox Church . After the patriarch had been driven out, the emperor established the archbishopric of Ohrid and the whole of Bulgaria without affecting the existing autocephaly . Only the Bulgarian name was retained, but Basil rewrote the jurisdiction of the new archdiocese and provided its 54 eparchies with a fixed number of semi-free peasants and clergy . The first archbishop he appointed was John I Debranin (1018-1037), who was still a Slav; his successor, Leo I. Carigradjanin (1037-1056), was already a Greek.

After the defeat of the Bulgarians, Basil turned to the eastern frontier, to which he had previously paid little attention. He fended off attacks by the Fatimids on Aleppo , interfered in the internal power struggles in Armenia (after 1020) and finally annexed it. Thus, however, an effective buffer zone was omitted, which was painfully noticeable after the Battle of Mantzikert .

The Byzantine Empire around 1025

Basil II died at the age of 67 on December 15, 1025 in the Great Palace of Constantinople. He is the Byzantine emperor with the longest reign, even if you count the emperors of the old Roman Empire, whose successor was Byzantium: Basil ruled a total of 62 years (counted from the death of his father Romanos II), of which 13 years between 963 and 976 as co-emperors alongside Nikephoros Phokas and Johannes Tzimiskes and then 49 years as sole ruler; his brother Constantine VIII, already 65 years old, previously a nominal co-emperor, ruled the empire alone for another three years as his successor. 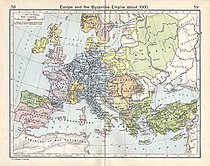 Byzantium and Europe around the year 1000

Basil II was a capable general. However, he did not succeed in curtailing the power of the great noble families, who continued to exert a decisive influence on politics. Another problem during his reign was the policy of annexation, which was not very successful in the east. Since the emperor remained unmarried, he had no children to continue his dynasty.

Nevertheless, Basil was the last emperor of the Byzantine Empire who was capable of real military expansion - especially since he had the advantage of not having to fight on all borders at the same time like many of his predecessors and successors. In terms of cultural and educational policy (see for this time the Macedonian Renaissance ) it did not appear.