This article deals with the Byzantine general and emperor. For the ruler and despot of Epirus see Nikephorus II. Dukas . 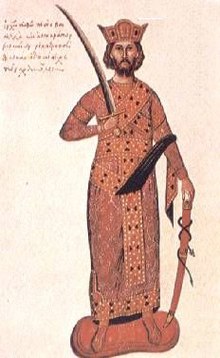 The grandfather Nikephoros Phokas the Elder (* around 855, † 896) was in the second half of the 9th century under the emperors Basil I and Leo VI. (886–912) an important general. The family came from the Byzantine magnate family of the Phokadai , who were among the most distinguished representatives of the Byzantine military nobility and who owned extensive land in Anatolia . The father Bardas Phokas the Elder (* around 879, † 969) was initially in the shadow of his older brother Leon Phokas (* 875/79, † n. 917) and between 944 and 953 led the imperial politics as Domestikos in the name of Constantine VII .

At a young age, Nikephoros Phocas joined the army and became commander on the eastern border under Constantine VII. The war with the Arab Hamdanids brought heavy defeats, which were made up for in the following years by victories in Syria . Saif ad-Daula , emir of Aleppo since 945, carried out raids deep into Byzantine territory and retained the military upper hand until 955.

Reinforcements of the Byzantine Eastern Army under the command of his uncle Bardas Phokas made the Byzantine counter-offensive possible. Together with his brother Leo Phokas and the Armenian general Johannes Tzimiskes, Nikephoros commanded the contingents of the army on the eastern border. The troops of the commander Leo Phokas carried out a campaign in the direction of Cyrrhus in 959, several fortresses surrendered on his way. Together with Basil Lekapenos, General Tzimiskes stormed the city of Samosata and inflicted another heavy defeat on the enemy.

In the summer of 960, Nikephoros led the Byzantine expedition to Crete , stormed Candia (today Heraklion ) on March 7, 961 after a ten-month siege and recaptured the island from the Arabs. In the meantime, Saif ad-Daula regained direct control of Cilicia for a short time and began to rebuild the destroyed fortifications of Anazarbus . The undertaking remained unfinished, because advancing troops under Leon Phokas forced Saif to vacate the region again. In the following year 961, a Byzantine fleet liberated the island of Thasos .

After receiving the unusual honor of a triumphal procession in Constantinople, Nikephorus returned to the east with a large and well-equipped army. In the campaigns of 962 and 963, he used a brilliant strategy to force his way through Cilicia to Syria and Jazira . In mid-December 962 he suddenly appeared outside Aleppo . After defeating an improvised army in front of the city wall, the Byzantines stormed the city in March 962, with the exception of the citadel. Around 10,000 residents, mostly young men, were taken prisoner. The sack of Aleppo weakened the position of the ruling Hamdanids, but it was not a final success for the Byzantines either.

After the death of Emperor Romanos II , the members of the House of Phokadai had to defend themselves against the intrigues of the minister Joseph Bringas . With the help of the imperial widow and regent Theophano and the patriarch , he was given supreme command of the Eastern Army . Thanks to his popularity in the army, Nikephorus was proclaimed emperor. He returned to Constantinople in July 963, where in the meantime the eunuch Bringas had been overthrown by his own partisans. On August 14, 963, his father Bardas Phokas had the satisfaction of being there when his son made his ceremonial entry into Constantinople and was crowned Emperor of the Byzantine Empire on August 16 in Hagia Sophia by the Patriarch Polyeuktus as Nikephorus II. On September 20, the solemn wedding to the empress widow Theophano followed in the Palatine Chapel of the New Palace. The aged Bardas Phokas was made Caesar, Bringas was banished to his homeland Paphlagonia . The new emperor's brother Leon was appointed Kuropalates (court marshal), General Tzimiskes was confirmed as Domestikos and received the supreme command of the troops in Anatolia.

During his reign he continued his warlike policy. In 963 Saif ad-Daula organized three simultaneous attacks in Asia Minor , despite a famine that had broken out in this region. The deepest incursion even reached Iconium . Tzimiskes responded with a simultaneous invasion of Cilicia in winter. The Byzantines destroyed an Arab army near Adana , then besieged Mamista without success . In the autumn of 964 Mopsuestia was besieged again, held out again, a famine that plagued the province forced the Byzantines to withdraw again. Emperor Nikephoros appeared personally at the theater of war in 964 and finally achieved the surrender of Mamista, he had his residents deported. On August 16, 965, Tarsus , whose defenders were guaranteed free retreat to Antioch, was retaken by the Byzantines. Cilicia became a Byzantine province again and Nikephorus began to Christianize it again. The fleet under Patrikios Niketas Chalkoutzes conquered Cyprus in 965 , breaking a treaty with the Arabs. The reconquest of the island gave the land army the necessary flank security to continue the attack along the northern Syrian coast.

Histamenon of Nicephorus and his foster son Basil .

Nikephorus was less successful in his wars in the west. Having to pay tribute to the Fatimid - Caliph had set, he sent an expedition under his nephew Manuel Phocas and Admiral Niketas Abalantes to Sicily (964-965), but was after battles with Messina and after the siege of Rometta , forced to abandon the island .

On the northern border he began a campaign against the Bulgarians in 967 , as they owed tribute to the Byzantines. He had previously been able to agree on a simultaneous attack with Svyatoslav I , ruler of the Kievan Rus . In the summer of 967, the diplomat Kalokyres was sent to Kiev with 15 kentenaria gold to win Svyatoslav for a war alliance against the Bulgarians. The Russian advance was quickly successful and the Bulgarian capital Preslav fell into their hands. Emperor Nikephoros, concerned about the security of his own northern border, entered into an armistice with the Bulgarians and allied himself with the former opponent against the greater threat from the Russians.

Hamdanide Saif ad-Daula , suffering from paralysis, died in early 967 and, after several uprisings by his magnates, left a very weak empire. Taking advantage of this advantage, most of the fortresses on the Syrian border fell by 968, and the Byzantines had already reached Edessa . The sword of the prophet fell into their hands, for whose return Nikephorus obtained the release of his Patrikios Niketas, who had been captured by the Fatimids in Sicily.

Nikephorus II made peace with the Fatimid rulers of Kairouan and began to take precautions against Otto I's influence in southern Italy. In February 967, the German emperor paid homage to the dukes there on the train to Benevento and Capua . However, since Byzantium claimed sovereignty over these areas, the conflict escalated when Otto began negotiations with Duke Pandulf I of Capua. After attacks on the Byzantine possessions, war broke out here too. After initial successes, his generals were defeated and driven back to the south coast of Calabria .

In the summer of 968, a Russian army under Grand Duke Svyatoslav with 60,000 men crossed the Danube and conquered most of the Bulgarian Empire by the end of 969 . After the emperor's return to his father's deathbed, the commanders, Petros Phokas and Michael Bourtzes , who were on the southern eastern border, were able to recapture the old Syrian patriarchal city of Antioch on October 28, 969 .

Because of the high expenses for the army and its equipment, Nikephoros had to make rigid savings in other areas. He restricted the generosity of the court, cut the salaries of the clergy and - although he himself was pious and ascetic - prohibited the establishment of new monasteries . The high taxes and the devaluation of the Byzantine coins damaged his popularity and riots broke out.

Empress Theophano, grasping the change in public opinion, began an affair with the Armenian general Johannes Tzimiskes, popular with the army, to secure her position . On the night of December 11, 969, the emperor was cruelly murdered with the help of Theophano in the Bukoleon palace of Tzimiskes and his henchmen. In the following year, Johannes Tzimiskes, who rose to become emperor, with the help of his general Bardas Skleros, stopped the advance of the Russians on Constantinople at the Battle of Arkadiopolis and finally defeated them on July 24, 972 on the Danube near Dorostolon .

Under the pseudonym "The pale death of the Saracens", Nikephoros also achieved great fame among military opponents. He was the author of a surviving treatise on military tactics containing valuable information on warfare at the time.

Nikephoros Phokas was married to a woman of unknown origin for the first time. At an advanced age, as the newly crowned emperor, Nikephorus II married the regent of the Byzantine Empire Theophano (* around 941, † 976), the widow of Emperor Romanos II (959-963) from the Macedonian dynasty, in order to strengthen his legitimacy ruled for their underage sons Basil II (* 958, † 1025) and Constantine VIII (* 963, 1028).

The origin of the widowed empress was unusual. She was the daughter of an innkeeper named Krateros. Her name had been changed to Theophano after Anastaso's marriage. Her reputation was alarming because there were rumors that she was not only the instigator of the murder of her father-in-law Emperor Constantine VII Porphyrogennetus , who ruled from 913 to 959, but also her first husband, Emperor Romanos II, who suddenly aged only in 963 Died 26 years ago.

What is certain is that during her second marriage to Emperor Nikephorus II, she became the lover of Johannes Tzimiskes (* around 925, † January 10, 976), who was not only an important Byzantine general, but also a nephew of her second husband. On December 11, 969, Emperor Nikephorus was murdered by his lover Theophanos. A few days later he ascended the Byzantine throne as John I Tzimiskes. The planned marriage of Theophanos with John I - her third imperial husband - did not materialize, however, because the Patriarch of Constantinople Polieuktos (956-970) raised an objection and demanded their exile; in her she finally died on the island of Prinkipo. 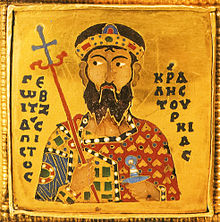 Géza I "the great", King of Hungary, through whose marriage European dynasties descended from Emperor Nikephorus II

Emperor Nikephoros Phocas left no descendants from his second marriage, but he did leave his first marriage. Descendants were (in extracts):

The Cretan community Nikiforos Fokas was named after Nikephoros in 1997 and has been a district of the city of Rethymno since 2011 .

The two most important narrative sources during his reign are the histories of Leon Diakonos and the historical work of Johannes Skylitzes . While Nikephoros is described positively in Leon, the description of the Skylitz is more distant to him.