A famine is a phenomenon in which a large proportion of the population of a region or a country is malnourished and death from starvation increases ( "starvation") or by hunger related diseases in a great extent. This can, but does not always have to, be accompanied by actual food shortages. Not infrequently, famines led to hunger riots .

Hunger was so widespread in the Middle Ages that it was considered one of the " four horsemen of the apocalyptic " alongside war , pestilence and death . Several million people died in Europe in the famine of 1315–1317 . The worst famine in Europe in the 15th century took place from 1437 to 1439/40 . Famine is practically non-existent in industrialized countries today, but it still occurs in developing countries . Most of today's world hunger is not made up of acute famine, but the chronic hunger of poor sections of the population.

The UN defines a famine based on the Integrated Food Security Phase Classification as follows:

Possible causes of famines are crop failures due to natural factors such as storms , drought , pests and other natural disasters with insufficient stocks . These factors can be exacerbated by unsustainable economies that encourage erosion and desertification ; conversely, improved stocks and adapted farming methods can reduce susceptibility to natural hazards.

The eruption of the Indonesian volcano Tambora in 1816 led to the " year without a summer ", crop failures and famine. Draft animals were slaughtered, seed potatoes dug up again, hunger rolls made with gypsum powder, acorn or sawdust, or cooked grass, clover, roots and hay ate. The harsh winter of 1783/84 with subsequent floods and crop damage was caused by the eruption of the Laki crater on Iceland. See also Little Ice Age and List of Weather Events in Europe and List of Major Historical Volcanic Eruptions .

Since the 1970s, in addition to natural and economic causes of famine, social and political reasons have also been considered and analyzed. The economist Amartya Sen has stated that there has never been a famine in any functioning democracy . Hunger is a problem of food distribution and the poverty of the affected sections of the population, not necessarily an absolute lack of food. See also " How inequality creates hunger ". 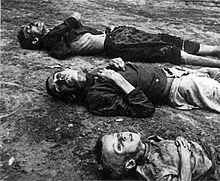 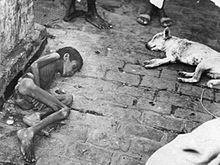 Artificial famines are caused by war or policy failure, or are deliberately triggered with genocidal intent. In cases like the Great Leap Forward , North Korea in the mid-1990s or Zimbabwe since 2000, hunger can essentially be viewed as a result of government policy. In other cases, such as the civil wars in Somalia or Sudan , hunger has been an inevitable result of war or a deliberate part of war strategy when food distribution systems are disrupted and agricultural activities are rendered impossible. Humanitarian aid measures such as Operation Lifeline Sudan have been partially taken over by the conflicting parties.

If hunger is used deliberately in war or as a tool of a repressive government against an undesirable population group, one also speaks of "hunger as a weapon". For example, the Soviet communist leadership under Josef Stalin initiated the Holodomor in Ukraine and the famine in Kazakhstan during the 1930s . The military dictator Gowon blocked the supply of food to the Biafra region after he came to power in Nigeria during the Biafra War (mid-1967 to January 1970) after Biafra declared independence.

Although mathematically enough food would be available for the entire world population, there are still famines , especially in Africa , in the 21st century . Today, acute famine is usually responded to with international food aid . In the years 2007 to 2008 and again from 2010 to 2011, the global price index for food rose sharply. Prices for staple foods such as corn , wheat and rice doubled and more. In a study for Welthungerhilfe, Hans-Heinrich Bass expresses the view that, in addition to the fundamental factors, changes in the behavior of financial market investors also drive prices up. However, this view is highly controversial among scientists.

In 2008, the World Bank considered hunger riots (triggered by the sharp rise in food prices at the time) in 33 countries to be possible. Riots in Haiti led to the dismissal of Prime Minister Alexis . The reasons for the price increase are often cited as population growth , crop losses due to droughts and floods, apparently as a result of climate change , the competition between cultivation areas for biofuels and animal feed for meat production, and a growing need for food in emerging countries such as China and India . The decade from 2000 to 2010 was also marked by a rising oil price ; In mid-2008, it hit an all-time high of around $ 140 a barrel.

Hunger is divided into two types:

Acute hunger (famine)
Describes malnutrition over a definable period of time. This often occurs in connection with crises (e.g. droughts caused by El Niño), wars and disasters and often affects people who are already suffering from chronic hunger. Almost ten percent of all hungry people are affected by acute hunger.
Chronic hunger
Denotes a state of permanent malnutrition. Although the media mostly only report on acute hunger crises, chronic hunger affects the vast majority of those who go hungry. They don't have enough to eat, usually also no clean water or health care.

Hunger is also differentiated according to what is specifically lacking in nutrition:

Energy and protein deficiency (macronutrients)
Less food is consumed every day than the body needs. The UN Food and Agriculture Organization FAO has set the threshold at 1,800 calories per day. From this the number of 795 million starving people is calculated. It should be noted, however, that poor people in particular often have to work hard physically, and the value should therefore actually be higher.
"Hidden" hunger
Due to a lack of vitamins and minerals (micronutrients). A one-sided diet means that important nutrients such as iron, iodine, zinc or vitamin A are missing. The consequences are not necessarily visible at first glance, but children in particular cannot develop properly mentally and physically. The risk of death is high. Two billion people worldwide suffer from “hidden hunger”.

This section needs revision: a complex topic, too concise.
Please help to improve it , and then remove this flag. 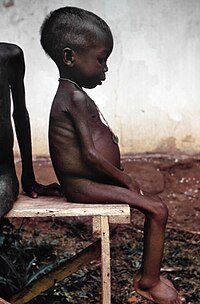 Child in the Biafra War , Nigeria

On recent famines in Africa, see for example: Famine in Somalia (1990s) .

Example of the Sahel zone

Basically, it can be stated that in addition to the natural causes of the lack of precipitation or precipitation at the wrong time and erosion damage, humans in particular contribute to famine through:

Hunger has a strong impact on demographics . For example, it has been observed that prolonged periods of starvation can lead to a reduction in the number of female children ( see also infanticide ). Demographers and historians debate the causes of this tendency. Some believe that parents deliberately favor male children (by selling female children or killing them after birth, see neonaticide ). Others believe that biological processes ( amenorrhea ) can be the cause.

Famine often respond to pressures on their livelihood by selling things like livestock, land, or tools. This enables them to survive in the short term, but weakens their economic base in the long term. In Ethiopia, most families affected by the 1984–1985 famine have not yet reached the social, economic and productive levels that they had before.

Measures to prevent famine can be mentioned:

Another measure to combat food shortages is to refrain from producing and consuming animal proteins. For example, around five to ten kilograms of vegetable protein are required to produce one kilogram of animal protein. During the flu epidemic in the winter of 1917–1918, the Danish doctor Mikkel Hindhede advised that the grain and potatoes previously used as pig feed should be used directly for human consumption. The pig population has been reduced to a fifth. As a result, a famine (as in Germany, which was also affected, where even more food was available than in Denmark) could be avoided and the mortality rate of the population could be reduced by 17 percent to the lowest previous level.