The title of this article is ambiguous. Further meanings are listed under wheat (disambiguation) .

As wheat a series of is plant species of grasses (Poaceae) of the genus Triticum , respectively. As grain mainly two types are grown: wheat and durum wheat . Etymologically , the word wheat is derived from the “white” (light) flour and the light color of the wheat fruit, the generic name Triticum (grinded fruit , threshed grain) from the Latin participle tritum (grated, threshed).

The wheat species reach heights of about 0.5 to 1 m. The stalk is rounded. From the overall appearance, it looks dark green and the ear of corn is squat. The morphological distinguishing features are the short ciliate leaf auricles , which, unlike barley, do not enclose the stalk. The ligule is medium-sized and toothed. The fruits are botanically referred to as "single-seeded closing fruits" ( caryopses ), the thousand grain mass is 40–65 grams.

According to R. Govaerts, the genus Triticum comprises five species, almost each of which comprises several subspecies: 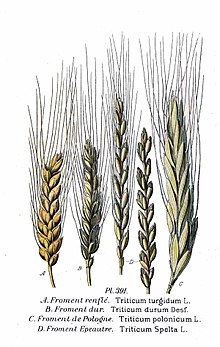 The closely related whales ( Aegilops ) are sometimes included in the genus Triticum , some species of which were crossed into the cultivated wheat species.

The Federal Office shares with his approval, the soft wheat varieties in four so-called baking quality groups one. (The main feature of the classification is the volume yield in the Rapid Mix test, a baking test):

Domestication, breeding and expansion of cultivation

Today's seed wheat emerged from the crossing of several types of grain and wild grass. The first types of wheat cultivated were einkorn ( Triticum monococcum ) and emmer ( Triticum dicoccum ). Their area of ​​origin is the Middle East ( Fertile Crescent ).

The oldest naked wheat finds date from between 7800 and 5200 BC. This makes wheat the second oldest type of grain after barley . With its spread to North Africa and Europe , wheat gained fundamental importance.

The oldest finds of naked wheat in Europe come from the western Mediterranean region, the settlement area of ​​the cardial or imprint culture . In the end of the Neolithic, naked wheat was reduced to a region on both sides of the Upper Rhine and Switzerland after it had spread over Central Europe. But cultivation lagged behind that of the grains einkorn, emmer and barley for a long time. It was not until the white bread , which came into fashion from the 11th century, that wheat established itself. Today, wheat is the most commonly cultivated type of cereal in Germany and takes up the largest share of the area under cultivation.

Einkorn ( Triticum monococcum ) is the most original form of cultivated wheat; Even today one can still find wild forms of the einkorn, so that domestication by means of human selection appears clear. The tetraploid emmer ( Triticum dicoccum ) developed from the Einkorn through the formation of an addition bastard with another wild grass (possibly Aegilops speltoides Tausch, Syn. Triticum speltoides (Tausch) K. Richt.) In prehistoric times , from which species such as Durum wheat and kamut originated.

The common wheat ( Triticum aestivum ), which is predominantly grown today, is a more recent breed and genetically relatively far removed from the "wheat" mentioned in historical sources. The wheat of Rome was emmer ( far ). Modern wheat originated from the uptake of the entire gene set of the wild grass Aegilops tauschii Coss. (Syn. Triticum tauschii (Coss.) Schmalh. , Aegilops squarrosa auct.) In the emmer.

The International Wheat Genome Sequence Consortium expects that a complete DNA sequence with a genetic map of the wheat will be available by 2018 . The wheat genome comprises around 17 billion base pairs, which is around five times as long as that of humans. An important step was achieved in 2017 when the genome of tetraploid emmer, which is part of hexaploid wheat, was sequenced. Wheat growers from major exporting countries expect great progress in conventionally and genetically engineered varieties, the more precisely the location and function of the individual genes are known. In August 2018, Science magazine reported that the International Wheat Genome Sequencing Consortium had almost completely decoded the genome of common wheat .

In the USA in 2004 by Monsanto produced transgenic wheat, the glyphosate resistance against the pesticide Roundup ( glyphosate ) conveys approved for cultivation. Monsanto refrained from commercialization in the following years, as they did not want to provoke the opposition of the EU and Japan and thus not endanger the lucrative export of American wheat. Since it has been proven that outcrossing of transgenes from genetically modified wheat to related grass species such as Walch ( Aegilops cylindrica ) is possible, the use of genetically modified wheat is problematic. In 2013, glyphosate-resistant wheat was found in a field in Oregon, USA. How this transgenic wheat, which comes from Monsanto's production , could grow in an uncontrolled manner has not been clarified. In Switzerland, the University of Zurich is carrying out a release test with transgenic wheat from spring 2019 to autumn 2023.

Schematic longitudinal section through a grain of wheat 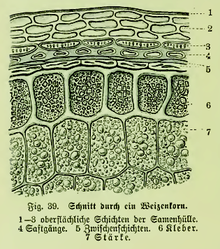 Wheat makes higher demands on the climate , soil and water supply than other types of grain. Wheat is adapted to dry and warm summers . A modern hybrid of wheat and rye , triticale , allows it to be grown in cooler climates.

In Germany, winter wheat is sown on over 90% of the wheat cultivation areas . Winter wheat is, after the dormancy of the seed , in the fall seeded (at the end of September to well into December). Depending on the altitude and the time of sowing, around 280 to 520 seeds are sown per m². Due to the wide range of the thousand grain mass of wheat from less than 40 to more than 60 g, it is difficult to give an average seed quantity in kg / ha; with a target seed density of around 320 plants per m² and a thousand grain mass of 48 g, for example, a seed quantity of arithmetically would result approx. 154 kg per hectare.

When sowing in the autumn seedbed , it should be noted that wheat is not a dark germ , but has a light-neutral germination behavior. For this reason, a particularly large depth does not have to be selected for the sowing depth in order to ensure good germination. In moist, warm soil , the seeds germinate quickly and lead to field emergence in 15–20 days . The small plants form side shoots ( tillering ) and overwinter.

Like all winter cereals, winter wheat also needs vernalization due to frost temperatures in order to break down the lock . The main stocking does not take place until spring and is heavily dependent on the variety and care measures. With late sowing, which is usually associated with low soil temperatures, germination is slower. However, germination still takes place at soil temperatures of 2 to 4 ° C. Winter wheat is therefore compatible with late sowing, so sowing can be carried out until December. However, sowing late can lead to less than optimal crop yields and requires higher seed densities. Although wheat (depending on the variety) is frost-resistant down to around −20 ° C, it generally prefers a temperate climate.

In spring elongation ( shoots ) begins and the leaves develop. At the end of the stretching phase there is already a complete ear with spikelets and flowers. The ears push outwards and the plant development is complete with the flowering. After (self) fertilization, the grains develop. Two to three ears of stalks are formed per plant, which corresponds to about 350 to 700 stalks per m².

Around 25 to 40 grains develop in each ear. They are made in the full maturity of about 70% strength , about 10-12% protein , 2% fat and 14% water . The amount of the ingredients mentioned depends on the variety, the fertilization and, in the case of water, on humidity and rain.

Several crop protection applications are required in conventional cultivation to combat weeds, insect pests, fungi and excessive growth. An adequate and balanced supply of nutrients is also necessary for the optimal yield , with nitrogen fertilization in particular taking place in several doses (portions).

The harvest takes place in midsummer of the year following the sowing. The straw remains chopped on the field or it is pressed into bales as litter for the animals and then removed.

Spring wheat (from Middle High German sumer wheat , Triticum durum or Triticum sativum ) is sown as early as possible in spring; it does not need a dormant vegetation phase , so it does not have to be vernalized . Its grain yields are usually well below those of winter wheat. The grains have a more glassy structure than winter wheat, but are richer in protein. Summer wheat production in Germany made up 0.2 million t in 2009, only 0.8% of the total wheat harvest.

Under exchange wheat means a summer wheat in the fall (November / December) can be sown last year.

Importance as a staple food 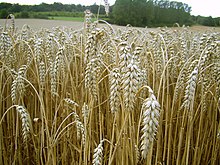 A combine harvester mows and threshes the wheat, chops the chaff and blows it over the field. The threshed wheat is loaded onto a trailer at full speed.

In the world grain harvest, with 735.2 million t (2018), the various types of wheat were the third most widely grown grain after maize (1.15 billion t) and rice (782 million t). The area under cultivation for wheat increased worldwide 214.8 million hectares.

Wheat is a staple food (bread grain) for people in many countries and is of great importance in animal fattening . Durum wheat is particularly suitable for the production of pasta ( durum wheat semolina ) - but is practically not grown in Germany (2009: 62,000 t, this corresponds to only 0.2% of the total wheat production).

Wheat is traded worldwide on commodity futures exchanges, including the Chicago Board of Trade (CBoT), the Kansas City Board of Trade (KCBOT), Eurex (Zurich) and MATIF (Paris). The international securities identification number (ISIN) for wheat in exchange trading is: US12492G1040.

The following table gives an overview of the 20 largest producers of wheat worldwide, who produced a total of 86.7% of the harvest.

Some states pay export subsidies so that wheat can be traded at world market prices . For example, Germany exported a quarter of its wheat exports to Africa in 2016. For the first time since 2007, Australia had to import small amounts of protein-rich wheat (from Canada ) again in 2019 because of the 2018/2019 heatwave . Australia's export volume during this period was more than eighteen times as high.

The global warming leads to an accumulation of dry and hot periods and to an intensification of fluctuations in income in wheat production. On the basis of field tests, it can be estimated that the amount of wheat produced worldwide will decrease by 6% with every further increase in temperature. Even if the limitation of the global temperature rise to two degrees Celsius, as envisaged in the Paris Agreement , is achieved, there will be negative effects on the global crop yields per area. This results in the need to switch to more drought-resistant wheat varieties in order to adapt to the climate , for example by breeding new wheat varieties, which can partially, but not completely, dampen the decline in yield.

As can be seen above, wheat contains little fat. The oil content of wheat germ is between 8 and 12%. The oil consists of more than 60% polyunsaturated fatty acids , of which about 88% consists of the omega-6 fatty acid linoleic acid . Wheat germ oil has a proportion of 200-300 mg vitamin E per 100 g and is therefore the oil with the highest total content of this vitamin. The vitamin E in wheat germ oil consists mainly of α-tocopherol, with about 1.2 mg / 100 g it also contains some tocotrienols . Wheat germ oil has a low oxidation stability.