Emmer ( Triticum dicoccum ), also called two-grain , is a type of plant from the genus wheat ( Triticum ). Together with einkorn , it is one of the oldest cultivated cereals . This type of wheat with long awned, mostly two-flowered spikelets is rarely grown in Europe today - if so, it is mainly black emmer. There are also white and red emmer.

Its root form is the wild emmer ( Triticum dicoccoides ).

Wilder Emmer is the forefather of the "Emmer range" (with 2n = 4x = 28  chromosomes ). Durum wheat ( Triticum durum ) and Kamut also belong to it . Emmer is tetraploid and a naturally occurring addition bastard of two diploid sweet grasses : Triticum urartu , which is closely related to wild einkorn ( Triticum boeoticum ), and a so far not exactly identified Aegilops species, which is closely related to Aegilops searsii and Aegilops speltoides .

The wild form of the emmer can be fertile crosses with domesticated tetraploid wheat.

Wild emmer is found in southeastern Turkey, Syria, Lebanon, Jordan, Palestine, Israel and in eastern Iraq and Iran ( Fertile Crescent ). Sometimes it grows together with the wild tetraploid wheat ( Triticum araraticum ), with which it can easily be confused. According to genetic studies, the domesticated emmer is most closely related to the wild species in southeast Asia Minor .

Emmer is one of the oldest cultivated cereals. Its origin is in the Middle East , where it has been grown for at least 10,000 years. In Europe, emmer and einkorn cultivation spread during the earliest Neolithic settlement. As arable farming spread, the Emmer came from western Persia via Egypt , North Africa and the Balkans to Central Europe .

In Roman times, the Emmer was known as the “wheat of Rome”. It was not until the modern era that it lost its importance in Europe; In the course of the 20th century, however, the cultivation area for emmer increased again.

Emmer is one of those grasses whose grains - just like nuts - are one of the lonely closing fruits. The emmer has two grains per spikelet , which are tightly enclosed by husks. Emmer can grow up to 1.50 m high. The enormous height may lead to poor stability. The auricles of the emmer are large and ciliate, the ligules are medium-sized and blunt-toothed. The lemma is awned and the glumes are long and serrated. The awn length is a few centimeters.

Characteristics of the grain and use 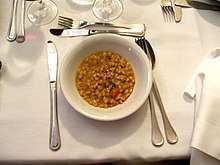 Emmer grain is rich in protein and minerals . Despite its moderate adhesive characteristics Emmer is also responsible for making bread suitable. Whole-grain baked goods give emmer a hearty and slightly nutty taste. Emmer is also used to make beer . The emmer beer is dark and very spicy.

The ears of corn are in the floristic used in floral arrangements. The cooked grains can be used as an insert for soups and stews, but also in salads, casseroles or patties. An Italian specialty is the two-grain soup ( Minestra di farro or: Zuppa al farro ), a hearty Emmere stew, a classic "poor people's dish" from the rural areas of Tuscany .

Spread in the world today

Before the Second World War , emmer was still sparsely grown in Thuringia and southern Germany.

Today emmer is still a niche product in Central Europe, but it is gaining regional awareness. In northern Bavaria, emmer is grown again in the Coburg area and is used there, among other things, for beer production (the Riedenburger brewery , for example, specializes in emmer beer ). Emmer cultivation was resumed there as part of a project to promote the cultivation of old cultivated species and rare field herbs . Researchers from the University of Hohenheim (Stuttgart) and representatives of the Baden-Wuerttemberg state guild association of bakers have founded a "Spelled Grain Working Group" (Einkorn, Emmer and Dinkel ), in which millers and noodle manufacturers are also represented, and want to promote the cultivation of these early wheat varieties.

In Austria, emmer is grown in Burgenland and Lower Austria and sold through organic shops and supermarkets. In Switzerland, white emmer has been grown again in Schaffhausen's Klettgau and in Zurich's Weinland region since the mid-1990s. The products processed from it include emmer grains and flours as well as special breads, pasta, Emmer black beer and Emmer schnapps.

Emmer cultivation is being expanded in Italy . Especially in the mountainous area of Garfagnana in Tuscany , emmer, called farro in Italy, enjoys legal protection and special status ( Indicazione Geografica Protetta ). Production is monitored by a cooperative ( Consorzio Produttori Farro della Garfagnana ). Emmer products are sold in health food stores in Italy and even in the UK.

In Finland , emmer has been grown with good yields at Malmgård in Uusimaa since 2009. In 2012 emmer was grown there on 18 hectares.

Since emmer promises good yields on weak soils in mountainous areas and is resistant to diseases, it is also used e.g. B. in the Czech Republic , Slovakia (on the border between the two countries), Spain ( Asturias ), Greece , Albania and Turkey .

Emmer is a traditional fruit in Ethiopia , where it has the potential to improve food security.

Emmer does not have particularly high demands on the type of soil and the pH value of the soil.

The basic tillage should be done with a plow or cultivator . The seedbed preparation should not be too fine due to the structure reserve and the wind blade . This corresponds to the preparation of the seedbed for wheat. The stubble is for faster composting makes sense of crop residues.

The sowing time is between mid-September and mid-October. The emmer is very hardy as it can withstand temperatures down to about −20 ° C. The seed rate should be between 150 and 200 kg / ha and the seed depth 4–6 cm. The row spacing is 10–25 cm. Since emmer has husks that are rough and hairy, problems can arise when sowing . These problems can be avoided by peeling the emmer kernel.

The most common diseases are fungal diseases such as B. powdery mildew , grates , DTR , Septoria tritici and strawberry. The grain is protected from ear septoria (Phaeosphaeria nodorum) and fusaria by the husks . When sowing early, the frit fly plays the most important role as a pest .

Weed control can be used from the three-leaf stage. In the case of severe infestation, gentle grooming is also possible from the two-leaf stage.

The emmer is harvested from early to mid-August. When threshing with a combine harvester , it should be noted that harvesting is carried out with a lower drum speed and less wind than with wheat. It is not necessary to dry the grains if the grain moisture is below 14.5%. The grain can be stored with or without husks .

The yield of black emmer is around 30  quintals / hectare, far below the yield of wheat with 75 dt / ha. For this reason, the cultivation of emmer has fallen sharply since the First World War .

Emmer is not very stable and is extremely vulnerable to storage .

The black emmer ( Triticum dicoccon var. Atratum ) emerged from the emmer through natural selection . This is grown as winter grain because it has a higher yield than emmer. UV-related mutations are hardly possible in the black emmer, as it can protect itself well against it by its black color. For this reason, it is genetically the most consistent grain. The black color is caused by beta-carotene .