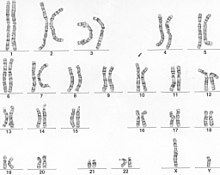 A man's chromosome set represented as a karyogram

The genome , also the genetic material of a living being or a virus , is the totality of the material carriers of the heritable information of a cell or a virus particle: chromosomes , deoxyribonucleic acid (DNA = DNA) or ribonucleic acid (RNA = RNA) in RNA viruses, in which RNA instead of DNA serves as an information carrier. In the abstract sense, it also means the totality of the heritable information (genes) of an individual.

The term genome was coined by Hans Winkler in 1920 , after Thomas Hunt Morgan successfully linked the chromosome theory of inheritance with Wilhelm Johannsen 's hypothesis of genes as hereditary units . The branch of genetics that deals with the study of the structure of genomes and the interactions between genes is known as genomics ( English genomics ).

The information required for the inheritance of properties and characteristics and passed on at the level of cells and individuals is contained in the DNA, namely in the sequence of the DNA bases adenine (A), guanine (G), cytosine ( C) and thymine (T). Ribonucleic acids use the base uracil (U) instead of thymine . According to the rule of the genetic code, three consecutive bases mean an amino acid .

A distinction is made between coding and non-coding sections of DNA. According to the base sequence of the coding sections ( genes ), proteins are formed from amino acids in the course of gene expression . But non-coding areas can also have important functions, for example in gene regulation . There are also so-called pseudogenes : genes that have become functionless due to mutations and are no longer read by the organism.

In addition to the chromosomal DNA of the cell nucleus (nuclear DNA, also called karyoma ), most organisms have other genetic material in other parts of the cell. Small genomes of their own are found in eukaryotes ( animals , plants , fungi and protists ) in the mitochondria ( mitogenome , also chondrioma ) and partly in their descendants, the hydrogenosomes ; in algae and land plants almost always in the chloroplasts and other plastids ( plastom ). Prokaryotes ( bacteria and archaea ) often contain additional, relatively short, self-contained DNA molecules known as plasmids .

In eukaryotes , the nuclear genome (karyoma) consists of several to numerous strand-shaped chromosomes. Nuclear DNA is also known as nuclear DNA (nDNA). The number of chromosomes differs depending on the species and can vary between two (in horse roundworms ) and several hundred (in some ferns ). In addition, the number of chromosomes changes when the nuclear phase changes ( meiosis and karyogamy ). Characteristic of eukaryotic genomes is a high proportion of non-coding DNA (around 95% in humans) and the intron - exon structure of the genes.

In the prokaryotes , DNA is a long, self-contained molecule. In addition, shorter, self-contained DNA molecules, so-called plasmids , can be present in variable numbers. These can be replicated independently of the main DNA and passed on to other prokaryotic cells ( conjugation ), even across species boundaries. As a rule, they contain only a few genes that, for example, confer resistance to antibiotics .

Prokaryotic genomes are generally much smaller than eukaryotic genomes. They contain relatively small amounts of non-coding (5–20%) and only a few or no introns at all.

The genomes of the mitochondria / hydrogenosomes and plastids are - if available - organized like prokaryotic genomes (see endosymbiont theory ). The 'mitogenomes' (more rarely also 'chondriomas', mtDNA ) and 'plastomes' (cpDNA, more rarely ctDNA) contain only a small part of the genes required for the function of these organelles, which is why these organelles are referred to as “semi-autonomous”.

Viral genomes are very small because only a few proteins are encoded in them and the genetic information is also highly condensed, for example, in that different genes overlap or some sections can function as genes in both reading directions at the same time. The viral genome (also called a virome) can

The retroviruses represent a special feature, the RNA genome of which can be "translated" into DNA by means of reverse transcription and integrated into the host genome. The properties of the genomes of viruses are important criteria in their classification ( virus classification ).

Some viruses and especially virophages (viruses that parasitize other viruses) have mobile genetic elements ( transposons , transpovirons , polintons ). In general, their entirety is also referred to as a mobilome.

The genomic RNA of the viroids is between 241 and 401 nucleotides short and contains many complementary regions that form double-stranded secondary structures. Viroids have no additional shell and are 80 to 100 times smaller than the smallest viruses. They multiply within living cells of higher plants.

The amount of DNA present in a genome is called the genome size. In eukaryotes, this information usually refers to the haploid chromosome set, which is also known as the C value . Either the number of base pairs present (bp) or the mass of the DNA in the unit pg ( picogram ) is given. 1 pg of double-stranded DNA consists of about 0.978 · 10 9 bp, i.e. just under one billion base pairs. The terms kilobase pairs (kbp or kb) for 1,000 base pairs and mega-base pairs (Mbp or Mb) for one million base pairs are also common.

According to recent studies, the South American lungfish ( Lepidosiren paradoxa ) has the largest animal genome known to date with 80 pg (7.84 × 10 10 bp). Older, but probably less precise studies show even larger genomes at around 133 pg, which were also found in lung fish , albeit in the African species Ethiopian lung fish ( Protopterus aethiopicus ). At 0.04 pg (less than 50 million base pairs), the approximately 2 mm large, poorly differentiated Trichoplax adhaerens belonging to the primitive animal strain Placozoa and living on algae has the smallest animal genome known to date . The number of base pairs in the intestinal bacterium Escherichia coli is only a factor of 10 smaller. The smallest bacterial genome quantified to date is found in the leaf flea - the endosymbiont Carsonella ruddii : its circular DNA molecule contains just under 160,000 base pairs, in which all the information it needs to live is stored.

The DNA of a single human cell is about six feet long in a row. A base pair on a DNA strand theoretically has an information content of 2 bits, since it can assume 2 2 = 4 states (A / T / G / C). With around 3.27 billion base pairs, the human genome would therefore have a maximum possible information content of 6.54 billion bits or 780 MiB . The actual information content is probably well below that, as large parts of the DNA have non-coding sequences, which, however, have at least some regulatory functions.

A comparison of the size of the genome with the complexity and degree of organization of the organism does not reveal a clear connection. So have Caudates larger genomes than reptiles , birds and mammals . Lung fish and cartilaginous fish have larger genomes than true bony fish , and the genome size varies greatly within taxa such as flowering plants or protozoa . This is known as the " C-value paradox ". The largest amount of DNA is found in simple eukaryotes such as some amoebas and primeval ferns with around one trillion base pairs. These species contain single genes in thousands of copies and long non-protein coding sections.

The DNA of genomes of different organisms, which are relevant either for medical-pharmaceutical or application-oriented research or for basic research, has been almost completely "sequenced" (one also incorrectly speaks of "decoding"), that is, its base sequence has been determined ( via DNA sequencing , in some cases after genome amplification ). The base sequences are u. a. provided by the NCBI .