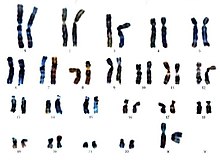 Karyogram of an unborn girl

Karyogram of a healthy man

Karyogram of a man with Klinefelter syndrome

A karyogram ( Greek ϰάρυον káryon 'nut, fruit core' and γράμμα grámma 'written') is the orderly representation of all chromosomes in a cell . It is classified according to morphological aspects such as size, centromeric position and band pattern .

Typical preparation of a karyogram in medicine

To create karyograms first chromosome preparations are made in which metaphase - chromosomes are adjacent. For this purpose, blood is taken from the patient, from which the lymphocytes are isolated ( erythrocytes are not suitable due to the lack of a cell nucleus ). They are cultured for three days in a special nutrient medium that contains a substance that stimulates cell division ( phytohemagglutinin ). The division of the nucleus (mitosis) is then interrupted in the metaphase by adding the mitosis inhibitor colchicine for two hours , since colchicine inhibits the development of the spindle apparatus .

In the metaphase of mitosis, the chromosomes are in a strongly condensed form and can therefore be easily recognized with a light microscope . The lymphocytes are sedimented in a pellet by centrifugation . The supernatant solution is aspirated and the lymphocytes are dissolved in a hypotonic solution (distilled water or 0.075 molar potassium chloride solution). The hypotonic solution causes the cells to swell and are then fixed with a methanol - glacial acetic acid mixture in a ratio of 3: 1 . In the next step, a drop of the cell suspension is dropped onto a slide using a pipette . When hit, the cells burst open. Since those cells that are in the metaphase do not have a nuclear membrane , the metaphase chromosomes usually come to lie next to each other on the slide.

They are stained with a suitable method (e.g. Giemsa staining , FISH test ). While photographs of the chromosomes used to be made under 1000x magnification and these were individually cut out by hand and sorted according to size, centromere region and band pattern , today this is done using image processing software on the computer.

The total costs of the medical creation of a human karyogram amounted to about 350 € in 2014.

The human chromosome set consists of 22 autosomes ( homologous chromosome pairs) and one gonosome pair (sex-determining chromosome pair). The appearance of the entire set of chromosomes, the karyotype , can be described by producing a karyogram in a person with 46, XX (44 autosomes and 2 identical gonosomes in a woman) or 46 XY (44 autosomes and 2 different gonosomes in a man) . In normal human body cells there are two chromosomes, there is a double ( diploid ) set of chromosomes (2n = 46 chromosomes). The sorting of the chromosomes in the karyogram is done according to the criteria of the size of the chromosome and the position of the centromere, into 7 groups (A – G). Depending on the position of the centromere, one speaks of acrocentric (near the end), submetacentric (between middle and end) and metacentric (in the middle of the chromosome). Due to morphological properties, the X chromosome is assigned to group C and the Y chromosome to group G. Schematic representations of average chromosomes , the idiograms, serve to compare the assignment made .

In human genetics, the aim of a karyogram is to identify possible genetic risks and hereditary diseases of the family in advance or to exclude them. Furthermore, the execution of a karyogram is mainly used to determine gender. Hereditary diseases are caused by defective genes and chromosomal abnormalities , which are inherited. These changes in the chromosomes are caused by mutations .

In the context of biological research, the production of a karyogram is used to create the karyotype, to describe a certain species (e.g. animal or plant) or to characterize special cell cultures or tumor cells.