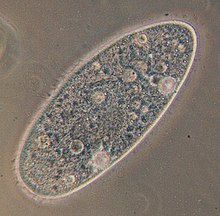 A cell ( Latin cellula , small chamber, cell ) is the smallest living unit of all organisms. A distinction is made between single-celled organisms , i.e. living beings that only consist of one cell, and multicellular , i.e. living beings that consist of more than one cell. If the living being consists of many cells ( multicellular cells ), cells can be connected to functional units and thereby form tissue . The human body consists of several hundred different types of cells and tissues. From an evolutionary perspective and in comparison to unicellular organisms, the cells of multicellular organisms have largely lost their ability to live on their own and have specialized in a division of labor in tissues.

The science and doctrine of the cells of living beings is cytology ( ancient Greek κύτος kytos , German 'cell' ).

Every cell represents a structurally definable, independent and self-sustaining system. It is able to absorb nutrients and to make the energy bound in them usable through metabolism. New cells are created through cell division . The cell contains the information for all of these functions or activities. Cells have basic abilities called characteristics of life , although not every cell has to have all of these characteristics:

In the course of evolution, two different groups of living beings have formed, which differ greatly in the structure of their cells: on the one hand, the prokaryotes , which consist of simply built cells without a nucleus , and on the other hand, the eukaryotes , which consist of cells that are essential have a more complicated structure and a cell nucleus. Prokaryotes and eukaryotes can occur both as unicellular and multicellular cells. In multicellular cells, cells form what are known as functional groups. Most of the time they share functions and are often no longer viable individually. Due to the specialization in multicellular cells, the abilities described above are limited.

The size of cells varies greatly. They are usually between 1 and 30 micrometers in diameter, but eggs from higher animals are often much larger than the rest of the cells. For example, an ostrich's egg cell has a diameter of over 70 mm, that of a person is 0.15 mm in diameter and is the largest cell and the only one that can be seen with the naked eye. 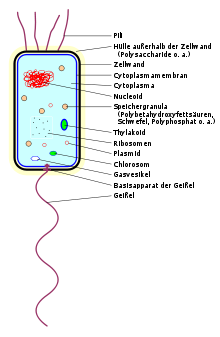 Scheme of a prokaryotic cell (bacterium)

Prokaryotes are characterized by a wide range of physiological and ecological types. Some are viable even under extreme conditions (temperature range up to over 100 ° C); oxic or anoxic environment; acidic environment (pH 1-4); high hydrostatic pressures (1000 bar). Many live parasitically, symbiotic or saprovor , some are pathogenic (disease-causing). They often contain plasmids (extrachromosomal, self-contained or linear elements of DNA). Furthermore, prokaryotes have only a limited ability to differentiate, for example in spore formation (including endospores in Bacillus subtilis ).

Eukaryotic cells are also known as eucytes . The main difference to prokaryotic cells ( procytes ) is the existence of a cell nucleus with a nuclear envelope around the DNA organized in chromosomes . The nuclear envelope consists of two membrane layers with intermediate space, a so-called. Double membrane , and is typically about 15 nanometers thick. Eukaryotic cells are much more differentiated than prokaryotic cells . Their multitude results from the very different functions that they have to fulfill. - The mean cell mass of eucytes is around 2.5 nanograms. Their length ranges from a few micrometers to several centimeters in the case of myocytes ( muscle fiber cells ).

Nerve cells (neurons) occupy a special position among the eucytes . These extend from the spinal cord into the peripheral extremities .

Cells from animals , plants, and fungi are eukaryotic cells, but there are some differences in their structure. Characteristic differences are listed in a table below.

Structure of the cell

Every cell, whether prokaryotic or eukaryotic, has a cell membrane . This cell membrane delimits the cell from its surroundings and controls what in the cell received is and what is transported. There are ions in different concentrations on each side of the cell membrane . The cell membrane maintains this difference in concentration, which creates a chemical potential. The medium enclosed by the cell membrane is the cytoplasm . All cells capable of dividing have DNA, in which the genetic information is stored, as well as proteins, which act as enzymes to catalyze reactions in the cell or to form structures in the cell, and RNA , which is primarily necessary for the construction of proteins. Important cell components are listed and briefly described below:

Each cell is enclosed by a cell membrane (also called a plasma membrane or sometimes a pellicle ). This membrane separates the cell from the environment and also protects it. It mainly consists of a double lipid layer and various proteins that, among other things, enable the exchange of ions or molecules between the cell and its environment. Their thickness is around 4 to 5 nm.

The cytoplasmic layer, which lies directly on the inside of the cell membrane, is referred to as the cell cortex (also cell cortex, syn. Actin cortex or actomyosin cortex). It is a special layer of cytoplamatic proteins rich in cytoskeletal elements.

Cell skeleton - the framework of the cell

The cell skeleton gives the cell its shape and mechanical stability. The cell skeleton also fulfills other functions. It is responsible for active movements of the cell as a whole, as well as for movements and transports within the cell. It also plays an important role in cell division and the reception of external stimuli and their transmission into the cell.

The existence of the three cytoskeletal elements as the basic equipment of every cell was recognized in the 1960s using electron microscopy and novel fixation (glutaraldehyde fixation) and detection methods (actin decoration by myosin head groups) and goes back to pioneering work by Sabatini and Ishikawa.

In prokaryotes, the DNA is in a simple, self-contained (“circular”) form. This structure is called the bacterial chromosome , although it differs considerably from the chromosomes of eukaryotic cells. In eukaryotic cells, the DNA is distributed in different places: in the cell nucleus and in the mitochondria and plastids , cell organelles with a double membrane. In the mitochondria and the plastids, the DNA is "circular" like in prokaryotes. The DNA in the cell nucleus is organized linearly in so-called chromosomes . The number of chromosomes varies from species to species. The human cell has 46 chromosomes.

The ribosomes are complexes consisting of RNA and proteins in prokaryotes and eukaryotes. They are responsible for the synthesis of proteins from amino acids . The mRNA serves as information for the type and sequence of the amino acids in the proteins. The protein synthesis is very important for all cells, which is why ribosomes are present in many numbers in the cells, hundreds partly to thousands of ribosomes per cell. Their diameter is 18 to 20 nm.

Centrioles are cylindrical structures measuring around 170 × 500 nanometers. They are involved in the formation of the MTOC (microtubule organizing center), which forms the spindle apparatus for separating the chromosomes during mitosis , but also contributes to the organization and physical stabilization of the cell during the interphase. Centrioles occur in most animal cells and the cells of lower plants, but not in higher plants (angiosperms).

In multicellular organisms, the cells are usually combined into tissues that specialize in certain functions. Such tissues often form a complex called an organ . In humans, for example, the lungs are responsible for the gas exchange of carbon dioxide and oxygen . There are similar, function-related structures on a very small scale within the cell. Such organelles can be found in every eukaryotic cell. The structure of plant and animal cells partly differs in the number and function of some organelles. Important organelles are listed below.

Cell nucleus - the control center of the cell

The nucleus forms the control center of the eukaryotic cell: it contains the chromosomal DNA and thus the majority of the genes . In mammalian cells it is 6 µm in diameter  . The nucleus is separated from the cytoplasm by the nuclear envelope , a double membrane with a space in between, total thickness about 35 nm . It is broken through by nuclear pores , which enables an exchange of molecules between the substance of the nucleus interior, the so-called karyoplasm , and the cytoplasm. The outer membrane of the nuclear envelope is connected to the endoplasmic reticulum . The synthesis of RNA ( transcription ) takes place in the cell nucleus . Those RNA types that are required for protein synthesis ( translation ) are transported from the cell nucleus through the nuclear pores into the cytoplasm. With a light microscope , a globular structure with a diameter of about 2 to 5 µm can be seen in the nucleus, which is called a nucleus or nucleolus . The DNA in this area of ​​the nucleus contains the blueprints for the ribosomal RNA , i.e. for the catalytic RNA of the ribosomes.

The mitochondria belong to the self-reproducing organelles and are only contained in eukaryotic cells, and in varying numbers. They contain their own genome, which contains many, but not all, of the genes important for mitochondria. The other genes are in the chromosomes in the nucleus. Therefore the mitochondria are semi-autonomous. Mitochondria are called the “ energy power plants ” of the cell. In them, the oxidation of organic substances with molecular oxygen takes place, with energy being released and stored in the form of chemical energy (as ATP ). They have a diameter of about 0.5 to 1.5 µm and are about 0.8 to 4 µm long.

Plastids only exist in eukaryotes that carry out photosynthesis , i.e. plants and algae. Like the mitochondria, the plastids have their own genome and, like the mitochondria, are self-reproducing, i.e. also semi-autonomous. There are different plastids, all of which are derived from the so-called "proplastid". They are able to transform into a different plastid shape. The chloroplast is the most frequently mentioned. It serves the use of light organic to building materials (photosynthesis) and contains all cellular components necessary for photosynthesis, particularly membrane systems with chlorophyll , auxiliary dyes , electron - and hydrogen transfer agents, and ATP synthase , as well as enzymes in the Calvin cycle for the CO 2 - Assimilation. Another plastid is, for example, amyloplast, which is able to store starch , an end product of photosynthesis.

These two systems consist of cavities bounded by membranes and are found in most eukaryotes. They are functionally closely linked. The endoplasmic reticulum (ER) is the fast transport system for chemical substances; the new nuclear membrane is also pinched off by the ER during mitosis. It is also important for translation, protein folding, post-translational modifications of proteins and protein transport. These proteins are then "distributed" by the Golgi apparatus. In the Golgi apparatus, the proteins are modified, sorted and transported to their destination. Defective proteins are sorted out and broken down.

Lysosomes and peroxisomes - the digestive organelles of the cell

Lysosomes are tiny cell organelles in eukaryotes that are enclosed by a membrane. They contain hydrolytic enzymes and phosphatases. Their main function is to digest foreign substances ingested by the enzymes they contain. In plants, cell sap vacuoles perform the tasks of the lysosomes. Peroxisomes (glyoxisomes in the storage tissue of plant seeds), also called microbodies, are evolutionarily very old cell organelles in eukaryotic cells. They act as detoxification apparatus. The peroxisomes contain around 60 enzymes called monooxygenases and oxidases, which catalyze the oxidative breakdown of fatty acids, alcohol and other harmful compounds.

Vacuoles, but for example also in the large, enclosed by a membrane reaction spaces mainly in plants, which can take up to 90% of the cell volume paramecium may occur (Paramecium). They perform a wide variety of tasks, including maintaining cell pressure ( turgor ), storing toxic substances, coloring the cell, digesting macromolecules and, in the case of the contractile vacuole, excreting water.

The history of the cell discovery

Cells and tissues can also be used as advanced therapy drugs to treat diseases.