RNA is a redirect to this article. Further meanings are listed under RNA (disambiguation) .

Linking of the nucleobases (C, G, A and U) via a sugar (gray) and phosphate backbone (turquoise) to the RNA

Ribonucleic acid (Ri | bo | nu | kle | in | säu | re; short RNS ; English RNA for ribonucleic acid ) (Latin-French-Greek artificial word ) is a nucleic acid that is a polynucleotide made up of a chain of many nucleotides composed. In certain virus types ( RNA viruses , retroviruses ) and the hypothetical primeval ribocytes, the biomolecule is the carrier of genetic information , i.e. the material basis of the genes . The word is made up of ribose and nucleic acid .

An essential function of the RNA in the biological cell is the conversion of genetic information into proteins (see protein biosynthesis , transcription and translation ), in the form of the mRNA it acts as a carrier of information. In addition, special types of RNA perform other tasks; in the case of RNA viruses , it even makes up the genome itself. Furthermore, parts of the cell components responsible for the conversion of this information also consist of RNA: snRNA and snoRNA are involved in the maturation of the mRNA , the catalytic components of the ribosomes form the rRNA , and the tRNA transports the building blocks for the proteins. Special RNAs are also involved in gene regulation .

RNA can also take over the tasks of enzymes ( ribozyme ) or act like antibodies ( aptamer ).

Structure and difference to DNA 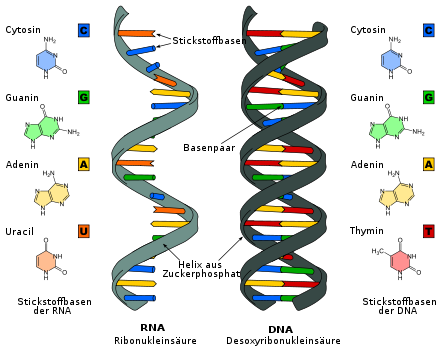 RNA and DNA in comparison

In terms of structure, RNA is similar to DNA . In contrast to double-stranded DNA, RNA molecules are usually single-stranded, but can develop characteristic refoldings in short stretches with complementary base sequences (AU, GC), which give the intramolecular impression of a double-stranded helix. Both are polynucleotides in which the nucleobases on sugars are linked to one another via phosphoric acid diesters. Single-strandedness increases the number of possibilities for three-dimensional structures in RNA and allows it to undergo chemical reactions that DNA cannot. In RNA, every nucleotide consists of a ribose (i.e. a pentose : a sugar with five carbon atoms), a phosphate residue and an organic base . The ribose of the RNA is identical to that of the DNA, except for a hydroxyl group instead of a hydrogen atom at the 2 'position in the pentose ring (hence also deoxy ribonucleic acid, D NA). This difference makes the RNA less stable compared to the DNA, since it enables hydrolysis by bases: the OH group at the 2 'position of the sugar is deprived of its proton by a negatively charged hydroxide ion and the oxygen that remains is deprived of its proton Ring bond with the phosphorus, whereby the bond to the next nucleotide is broken. The RNA is broken down into its nucleotides.

The following organic bases occur in RNA : adenine , guanine , cytosine and uracil . The first three bases are also found in DNA. Uracil, on the other hand, replaces thymine as a complementary base to adenine. RNA presumably uses uracil because it is less energetic to manufacture (no methyl substitution).

Like DNA, RNA can also be present as a double-stranded molecule. It has the typical features of a Watson-Crick helix: anti-parallel arrangement of the RNA strands and right-hand helix. It takes the form of an A or A 'helix (see DNA ). The A-RNA is also referred to as RNA-11, homologous to the A'-RNA, which is referred to as RNA-12. The number after the dash indicates the number of base pairs per helix turn. A´-RNA often occurs at high salt concentrations (over 20%).

The enantiomer of RNA found in living things is D- RNA. It is made up of D -ribonucleotides. The centers of chirality are in the D- ribose. By using L ribose or L -Ribonukleotiden can be L RNA synthesis. This is comparatively more stable compared to the enzymatic degradation by RNases .

The enzyme RNA polymerase catalyzes the DNA through the process of transcription from nucleoside triphosphate (NTP) the RNA. To do this, the RNA polymerase attaches itself to a nucleotide sequence of the DNA called a promoter ( transcription initiation ). Then it separates the DNA double helix into two single strands of DNA by breaking the hydrogen bonds in a short area. On codogenic strand of DNA are deposited by base pairing complementary ribonucleotides on. With elimination of a pyrophosphate, they are linked to one another by an ester-like bond between phosphoric acid and ribose . The reading direction of the DNA runs from the 3 'end to the 5' end, the synthesis of the complementary RNA accordingly 5 '→ 3'. The opening of the DNA double helix takes place only in a short area, so that the part of the RNA that has already been synthesized hangs out of this opening, with the 5 'end of the RNA first. The synthesis of the RNA is terminated at a DNA segment called a terminator. The RNA transcript is then released and the RNA polymerase separates from the DNA.

RNA can be artificially produced by phosphoramidite synthesis .

RNA molecules can perform different functions. The RNA can transmit genetic information. Other RNA molecules help translate this information into proteins and regulate genes . In addition, RNA can also have catalytic functions similar to an enzyme . RNA is therefore given different names, depending on its function. Preceding lower case letters indicate the different RNA types:

The following classes of RNA are commonly referred to as non-coding ribonucleic acids .

In the majority of living beings, RNA as an information carrier plays a subordinate role to DNA: Here, DNA is the permanent storage medium for genetic information, while RNA serves as a temporary storage facility. Only RNA viruses (the majority of all viruses) use RNA instead of DNA as a permanent storage medium. A distinction is made between the following RNA types for the taxonomy of viruses :

* ss (-) RNA : single-stranded RNA that serves as a template for mRNA production.

In addition, some viruses use RNA as a replication intermediate (e.g. retroviruses and hepadnaviruses ).

Since new RNA is constantly being formed and since different transcripts are required at different times (differential gene expression), the RNA in the cell must not be too stable, but must also be subject to degradation. This is done with the help of RNases , enzymes that separate the connections of the sugar structure of the RNA and thus form the monomers (or oligomers), which can be used again to form new RNA. When an RNA is to be broken down is mainly (but not exclusively) determined by the length of the poly-A tail , which is successively shortened as the RNA remains in the cytoplasm. If the length of this tail falls below a critical value, the RNA is quickly degraded. In addition, the RNAs can contain stabilizing or destabilizing elements that enable further regulation.

At least in the case of the mRNA of eukaryotes , the RNA breakdown does not take place somewhere in the cytoplasm , but in the so-called “P-Bodies” ( processing bodies ), which are very rich in RNases and other involved in the RNA turnover (breakdown) Are enzymes. Together with Stress Granules , these bodies continue to serve for the short-term storage of mRNA and thus again demonstrate the close link between RNA metabolism (here translation and RNA breakdown).

The RNA world hypothesis states that RNA molecules were probably the precursors of organisms in chemical evolution . The hypothesis can be derived from the ability of RNA to store, transfer and replicate genetic information and from its ability to catalyze reactions as ribozymes . In an evolutionary environment, those RNA molecules would occur more frequently that preferentially reproduce themselves.

Several Nobel Prizes have already been awarded for research on RNA :

RNA can be purified by RNA purification , e.g. B. by RNA extraction , are separated from other biomolecules . The amount and purity of the isolated RNA is determined by photometric measurement at a wavelength of 260 and 280 nm. Further information on the quality of the RNA is obtained by agarose gel electrophoresis followed by staining with dyes such as SYBR Green II , methylene blue , Stains-All or by a silver coloring . The qualitative detection of RNA (whether a certain RNA is present) is usually done by RT-PCR , sometimes with subsequent DNA sequencing , or by Northern blot . The quantitative detection (how much of a certain RNA is present) is usually carried out by qRT-PCR ; in the case of purified samples with only one RNA sequence, the concentration can also be determined by photometry . The RNA can be stretched and aligned through molecular combining . Using in situ hybridization , specific RNAs can be detected in cells and tissues without prior isolation.

RNA is used for different purposes. In the case of ribozymes , the RNA has an enzymatic activity , while aptamers enter into a longer-term bond to a target structure. Short double-stranded RNA in the form of siRNA and shRNA is used to temporarily suppress gene expression by means of RNA interference . RNA vaccines are one of the genetic vaccines in which the antigen is made within the cells of the person being vaccinated.