In genetics, the synthesis of RNA based on DNA as a template is called transcription (from late Latin transcriptio "transmission" to Latin transcribere "rewrite / overwrite") . The resulting RNA can largely be divided into three groups: mRNA (messenger RNA) (for protein biosynthesis ) as well as tRNA (transfer RNA) and rRNA (ribosomal RNA). Like translation , transcription is an essential part of gene expression . 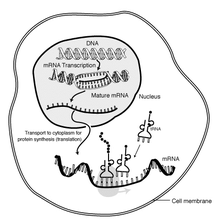 First the mRNA has to be transcribed, then it is used for translation .

In transcription is a gene read and reproduced as an RNA molecule, that is a specific DNA segment serves as a template ( template , English template ) for the synthesis of a new strand of RNA. During this process, the nucleobases of DNA (A - T - G - C) are transcribed into the nucleobases of RNA (U - A - C - G). Instead of thymine is uracil and in place of the deoxyribose is ribose in RNA before.

The process of transcription is basically the same for eukaryotes and prokaryotes . There are differences in the control and in the subsequent modification. In the case of prokaryotes, the control takes place via an operator , while in the case of eukaryotes the regulation can be regulated via an enhancer or silencer , which is upstream or downstream of the promoter . Furthermore, in prokaryotes, transcription takes place in the cytoplasm of the cell, in eukaryotes in the cell nucleus ( karyoplasm ). In eukaryotes, the pre-mRNA is also processed during or after its synthesis before it is transported from the cell nucleus into the cytoplasm. After transcription, the mRNA is translated into a protein in the cytoplasm on the ribosome .

Synthesis of the mRNA

Synthesis of the tRNA and the rRNA

In eukaryotic cells, the RNA polymerase cannot recognize the end of a gene by itself; it needs auxiliary factors that interact with the polymerase. These protein complexes recognize the polyadenylation site ( 5'-AAUAAA-3 ' ), cut the RNA and initiate polyadenylation while the RNA polymerase continues to work at the same time. A model for the termination of transcription is that the still growing, useless end of the RNA is degraded by an exonuclease ( Rat1 ) faster than it is elongated by the polymerase. When the exonuclease reaches the transcription site, the polymerase detaches itself from the DNA, and transcription is finally terminated (torpedo model of transcriptional termination). In addition, other protein complexes (e.g. TREX) seem to be important for a termination.

The archaea genes have a consensus sequence called a TATA box in the promoter . The two initiation factors of the archaea, TBP and TFB, bind to the promoter. A polymerase, which is orthologous to the eukaryotic RNA polymerase II and consists of twelve subunits, binds to this in turn.

In many cases, the transcription is linked to the subsequent splicing of the mRNA before the mRNA swims out of a nuclear pore or is now directly further synthesized into a protein.

In contrast to the eukaryotes, bacteria only have one RNA polymerase. The core or minimal enzyme consists of four subunits (2 × α, β, β '), which catalyzes transcription but does not initiate it. The core of the enzyme acts reciprocally with the loose sigma subunit and the holo-enzyme (2 × α, β, β ', σ (Sigma)) is formed, which can carry out the initiation (Sigma allows gliding along the DNA and Finding the Promoter's Pribnow Box ). The sigma subunit binds to the promoter of the non-template strand and there breaks the hydrogen bonds between the base pairs; it has a helicase function, which is the most important function of this polymerase.

The function of the α-subunit is, on the one hand, the preservation and stability of the structure, due to the amino terminal domain, and, on the other hand, the carboxy-terminal domain binds to the promoter and interacts with transcription regulatory elements.

The β and β 'subunits work together to provide binding to the DNA template and a growing RNA chain.

The σ (sigma) subunit recognizes transcription origins. There are several sigma subunits that recognize different groups of genes. The σ 70 subunit is the most widespread .

The ω (omega) subunit serves to stabilize and maintain the structure and is not absolutely necessary.

In some viruses there is the special case of reverse transcription, in which DNA is produced from an RNA template.