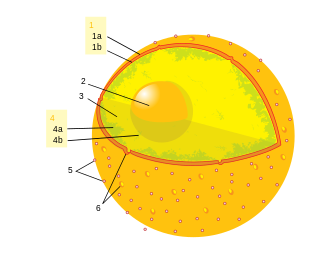 A cell nucleus or nucleus ( Latin nucleus "nucleus") is a usually rounded organelle of the eukaryotic cell , located in the cytoplasm , which contains the genetic material. With nuclear or karyo (ancient Greek κάρυον káryon "core") a reference to the cell nucleus is expressed, which is called the nuclear genome (in contrast to the one in the peripheral organelle), for example also karyoma . The science of the nucleus is also called karyology .

The cell nucleus is the main feature used to distinguish between eukaryotes (living beings with a delimited cell nucleus) and prokaryotes (living beings without a delimited cell nucleus, i.e. bacteria and archaea ). It contains most of the genetic material of eukaryotic cells in the form of several chromosomes (nuclear DNA or nuclear DNA). Other genes are found in the mitochondria and, more exceptionally, in hydrogenosomes , as well as in algae and land plants in chloroplasts and other plastids . Most cells contain exactly one nucleus. However, there are exceptions ( syncytium ); For example, myotubes, which are formed by the fusion of myoblasts , contain multiple nuclei. The nucleus itself is separated from the surrounding cytoplasm by a nuclear envelope or nuclear membrane, which serves to protect the genetic material and regulate the transport of substances between nucleoplasm and cytoplasm . In fruit fly embryos , kernels divide very quickly without initially creating separating cell membranes . Mature erythrocytes of mammals contain no core anymore, he is repelled during ripening.

Important processes that take place within the cell nucleus are DNA replication (the duplication of genetic material in the form of DNA ) and transcription (the creation of an mRNA copy of a given segment of DNA that often, but not always, corresponds to a gene ). 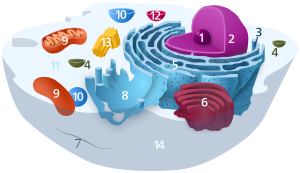 The cell nucleus, which in mammals typically has a diameter of 5 to 16  µm , is the organelle of the cell that is easiest to see under the microscope. It is bounded by the nuclear envelope , consisting of two biological membranes, the inner and outer nuclear membrane, which surround the so-called perinuclear cistern (width 10–15 nm, reinforced by microfilaments - thickness 2 to 3 nm). The total thickness of the nuclear envelope is about 35 nm. The outer nuclear membrane merges smoothly into the rough endoplasmic reticulum (rER) and, like this, also has ribosomes on its surface. The inner nuclear membrane is bordered by a 20–100 nm wide "felt", the nuclear lamina (Lamina fibrosa nuclei), which consists of lamines , a group of intermediate filaments , that supports the cell nucleus and separates the inner membrane from the chromatin of the cell nucleus.

Cell nuclei can look very different depending on the cell type. Most often they are spherical or oval. In some cells they look more like antlers. Sometimes the nucleus can be subdivided into knot-like sections, as is the case with the rosary-shaped nucleus of the trumpet animals . The granulocytes of mammals also contain lobed nuclei.

Due to the nuclear pores contained in the nuclear envelope , which cover approx. 25% of the surface, the active exchange of substances (e.g. rRNA or mRNA) takes place between the nucleus and the cell plasma , controlled by a nuclear pore complex . Regulatory proteins pass from the cytoplasm into the cell nucleus, transcription products such as mRNA are exported from the nucleus into the plasma for protein synthesis , which takes place on the ribosomes of the cytoplasm. The fluid in the nucleus is also known as the caryoplasm . Cell nuclei can be highlighted under a light microscope by staining the DNA , e.g. B. by the Feulgen stain , by Giemsa or by fluorescent dyes such as DAPI .

The presence of a core matrix was first suggested in the 1970s. However, their existence remains controversial.

The genetic material of the cell in the cell nucleus is located in the chromosomes , several DNA threads packed into chromatin , which in addition to the DNA also contain proteins such as histones . In addition to the histones, there are also other core proteins, such as B. DNA polymerases and RNA polymerases , other transcription factors and ribonucleic acids in the nucleus. 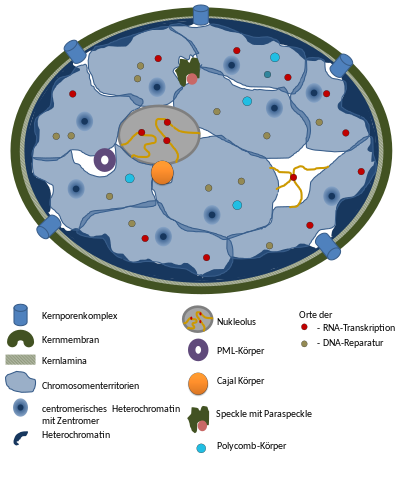 Structure of a vertebrate cell nucleus. Individual areas of the graphic link to the article in Wikipedia.

With a light microscope, one or more rounded structures can be seen in many cell nuclei, the nuclear bodies or nucleoli. They contain the genes for ribosomal RNA (rRNA). This is where the subunits of the ribosomes are formed, which enter the cytoplasm through the nuclear pores. Nucleoli contain only low concentrations of DNA compared to the rest of the nucleus, instead more RNA. Other “corpuscles” of the cell nucleus can only be represented using special staining techniques, such as antibody staining . The function of these bodies is mostly still unknown. This includes, for example, " speckles " (collections of factors that are required for splicing ), Cajal bodies or PML bodies . The spatial separation of the different components of certain core bodies could enable the molecular interactions in the extremely crowded environment in the core to be more efficient.

Arrangement of the chromosomes

Cell nucleus of a mouse fibroblast . The territories of chromosomes 2 (red) and 9 (green) were stained by fluorescence in situ hybridization (FISH) . DNA counterstaining in blue. A click on the picture opens a table with further examples from other cell types of the mouse.

During the interphase, chromosomes occupy defined areas in the cell nucleus, the chromosome territories . Their existence was first suggested by Carl Rabl (1885) and Theodor Boveri (1909); direct detection was only possible in 1985 with the help of fluorescence in situ hybridization .

The distribution of chromatin and thus of the chromosomes within the cell nucleus appears at first glance to be random: the arrangement of the chromosomes to one another changes from nucleus to nucleus, neighbors in one can be far apart in the next. Since the 1990s, however, some principles of order have been found. DNA replication does not take place uniformly during the S phase , but rather earlier in some parts of the chromosomes and later in others. Early or late replication are properties that are constant for all sections of the chromosomes in a given cell type. It turned out that early replicated areas are predominantly inside the nucleus, while late replicated areas are predominantly located on the nuclear envelope and around the nucleoli. Regarding the arrangement of the chromosome territories in the cell nucleus, it was observed that chromosomes with a high gene density are preferably located in the middle of the nucleus, while chromosomes with a low gene density are more often found on the periphery. For some cell types it has also been described that small chromosomes are more in the middle while large ones are on the outside. Both motifs are compatible with each other.

In mitosis and meiosis , the types of nucleus division that occur in eukaryotic cells, the cell nucleus temporarily disappears because the nuclear envelope is dissolved during the process of division. While chromosomes do not form any light microscopic boundaries in the interphase , they condense into the compact metaphase chromosomes for nuclear division. In this form of transport, the genetic material is distributed to the daughter cells. After division, the nuclear envelopes form again around the chromosomes of the daughter cells and the chromosomes decondense again. 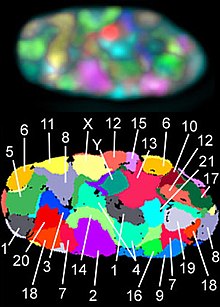 Above: Cell nucleus of a human fibroblast in which all 24 different chromosomes (1–22, X and Y) were stained by fluorescence in situ hybridization with a different combination of a total of 7  fluorochromes . Shown is a middle level in a deconvolved image stack that was recorded with wide-field microscopy.
Below: False color representation of all chromosome territories that are visible in this focal plane, according to computer classification.

The cell nucleus is the first organelle to be discovered in the cell. The oldest surviving drawing goes back to the early microscopist Antoni van Leeuwenhoek (1632–1723). This examined the red blood cells of the salmon and described a "lumen", the cell nucleus. In contrast to the red blood cells of mammals, those of other vertebrates have cell nuclei. Another mention was made in 1804 by Franz Andreas Bauer . In 1831 the Scottish botanist Robert Brown described the nucleus as "areola" in a lecture to the Linnaeus Society in London . He did not mention possible meanings. Such was first suggested by Matthias Schleiden in 1838 , namely that it plays a role in the formation of the cell. Therefore Schleiden introduced the name "Cytoblast" (cell builder). He said he had observed that new cells were formed on these cytoblasts. Franz Julius Ferdinand Meyen firmly contradicted the view that “the cell nucleus creates the cell itself”. He had previously described that cells multiply by dividing. However, Meyen was also of the opinion that many cells had no cell nuclei. The idea of ​​a new formation of cells was only overcome by the work of Robert Remak (1852) and Rudolf Virchow ( Omnis cellula e cellula , 1855), who aggressively advocated the new doctrine of the exclusive formation of cells from cells. The function of the cell nucleus remained unexplained.

Christian Gottfried Ehrenberg first observed the division of a cell nucleus in 1838 and drew attention to its role.

1876–1878 Oscar Hertwig published several studies on the fertilization processes of the sea ​​urchin egg, from which it emerged that the nucleus of the sperm penetrated the egg and there fused with the nucleus of the egg. This was the first time that it was claimed that an individual develops from a (single) nucleated cell. This contradicted Ernst Haeckel 's view that the entire tribal history would be repeated during embryonic development, in particular the emergence of the first nucleated cell from a “monerula”, a structureless mass of primordial mucus. The need for the sperm nucleus for fertilization was therefore controversial for a long time. Hertwig, however, confirmed his findings in other animal groups, e.g. B. Amphibians and Mollusks . Eduard Strasburger came to the same conclusion on plants (1884). This paved the way for the kernel to have an important role in inheritance. As early as 1873 August Weismann had postulated the equivalence of maternal and paternal germ cells for inheritance. The role of the nucleus in this only became apparent later, after mitosis was described and Mendel's rules were rediscovered at the beginning of the 20th century : the chromosome theory of inheritance was developed (see there and chromosome ).

1874 isolated Friedrich Miescher from cell nuclei, a substance, which he called nucleic designated (see history of discovery in the article DNA ). Only a few years later, other components such as histones and adenine ( Albrecht Kossel ) were added. It has only been possible since the 21st century to determine the genome , the transcriptome or, by means of mass spectrometry , the proteome of a cell at a certain point in time in order to get a comprehensive picture of this system.