Histones are basic proteins that occur in the nucleus of eukaryotes as well as in certain archaea , in particular Euryarchaeota and Proteoarchaeota . 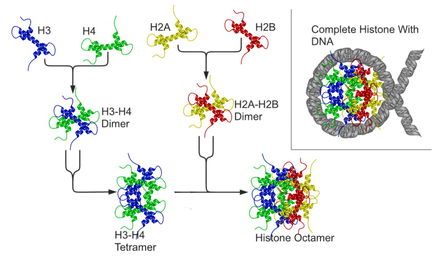 Schematic representation of the nucleosome formation from the histone proteins

As a component of chromatin , histones are of essential importance for the packaging of DNA and also for the expression of some of the genes encoded on it (see epigenetics ). The large genome in the nucleus of eukaryotic cells is divided into chromosomes , the smallest packaging units of which are nucleosomes . A nucleosome is similar to a coil in which the DNA strand wraps around a protein core made up of histones. Two copies of each of the histones H2A, H2B, H3 and H4 together form a protein complex of eight histones. The DNA is wrapped around this octamer histone , about one and a half times (1.65 times), over a length of 146 DNA base pairs . The DNA connecting neighboring nucleosomes is called linker DNA . Another histone, H1, binds DNA directly next to nucleosomes and allows the next higher packaging unit of the DNA.

Histones consist of a globular center and flexible terminal arms ( English histone tails ), which have numerous basic, positively charged amino acids . The DNA, however, is negatively charged, so that there is an electrostatic attraction.

The histone proteins were discovered in 1884 by the German physician and physiologist Albrecht Kossel . The term histone can be derived from Greek histanai or histos derived. Until the early 1990s, histones were misunderstood as pure packaging material for nuclear DNA. Their importance for epigenetic mechanisms could only be described in the last two decades .

The histone proteins H2A and H2B combine to form dimers . The same goes for H3 and H4. Two H3 / H4 dimers combine to form a tetramer , to which in turn two H2A / H2B dimers are attached. This creates the octameric nucleosome core ( English core particle ), around which the DNA can wrap in approx. Two large left-handed turns. The fifth histone, H1, may be needed to form a 30- nm fiber - a superordinate structure that corresponds to a helix of nucleosomes. This further strengthens the DNA packing. The compression of the DNA molecule is factor 7 without H1 and is increased to a factor of 40-50 with H1; H. an uncompressed DNA strand contains 3 million nucleotides / mm, compressed without H1 20 million nucleotides / mm and with H1 120 million nucleotides / mm.

In addition to the histone proteins mentioned above, there are also variants that take on very specific functions in the regulation of gene expression and the structuring of the chromosomes. One example is macro-H2A, which partially replaces the histone H2A on the inactivated X chromosome of female mammals. Another example is CENP-A, a variant of histone H3, which can only be found in the area of ​​the centromere and is essential for the specific structure of this chromosome region. By and large, the core histones H2A, H2B, H3 and H4 have been strictly conserved in evolution. Only the histone H1 is very variable in its structure, as the comparison of different organisms shows. In baker's yeast ( Saccharomyces cerevisiae ) this histone is completely absent. The binding of the DNA to the histones can influence transcription positively or negatively. For the processes of transcription, replication and DNA repair, the histones have to be detached from the DNA or moved on the DNA strand - a process known as nucleosome remodeling .

The archaean histones contain only one H3-H4-like dimeric structure made up of the same protein. Such dimeric structures can stack up to form a large superhelix ('supernucleosome') on which the DNA coils, similar to the coils of nucleosomes. Only some archaeal histones have terminal arms.

The N-terminal end of a histone can be modified by enzymes . These histone modifications can include methylation , phosphorylation , sumoylation , ubiquitinylation , acetylation , propionylation and butyrylation and their reverse reactions . This results in the specific histone code of a cell. These modifications have an impact on the chromate structure of the cell nucleus and thus on gene regulation .

The function of the methylation of histones is currently being intensively researched and is mainly related to the epigenetic inactivation of genes. Thus, 3 of a regional trimethylation of the lysine side residue (K9) on the histone promoter to a condensation result in chromatin structure in this area, it then has an inactivation of the gene expression of the on this section gene result. There are also connections to the inactivating process of DNA methylation . The phosphorylation of histone proteins increases the accessibility of the DNA in most cases and, among other things, plays an important role in the regulation of transcription during mitosis and meiosis . Acetylation, like phosphorylation, in most cases reduces the binding capacity of the histones for the DNA by the charge of the histones becoming negative and the negative DNA repelling each other. It is therefore a prerequisite for the transcription of the DNA associated with histones.

Histones are obviously evolutionarily very old and very important molecules, so they are highly conserved. They are among the most highly conserved proteins in eukaryotes, which underscores their important role in the biology of the cell nucleus. Histone genes are S-phase dependent, so they are only expressed when new DNA is formed, and then extremely strongly.

Similar to the rDNA, the histone genes are often repeated in clusters, that is, they are coupled, but each has its own promoter . The number of repetitions can vary considerably ( Saccharomyces cerevisiae has 2 clusters, the green newt has 700, in humans it is 10–24).

The order of the individual histone genes in the cluster is quite different, sometimes the genes are also arranged in opposite directions, sometimes in the same direction. However, in each cluster, all 5 histones are present.

The histone genes themselves also have a downright ancient structure. They do not have introns , nor do they have a poly (A) tail after transcription . The 3'-UTR is very short and contains two repetition units directed in opposite directions ( inverted repeats ). These form a hairpin structure, which is otherwise only known from genes from prokaryotes . The hairpin structure is important for the coordinated maturation of the histone mRNA and for the regulation of its lifetime in the S phase.

In mammals and birds, the clusters are not arranged repetitively, but rather distributed. Some histone genes are S-phase correlated and are quite close together. Their structure corresponds to the “normal” histone genes. Others, on the other hand, are so-called replacement histone genes that can replace defective histone proteins, even outside the S phase. These lie apart from the histone clusters and have long 3 'UTRs and a poly (A) tail.

History of the development of the histones

As already mentioned, histones are found in the nuclei of eukaryotic cells and in certain archaea - in Proteoarchaea and Euryarchaea, (except for H1, see below) but not in bacteria. The histones found in archaea appear to be very similar to the evolutionary precursors of eukaryotic histones. These results support modern variants of the eocyte theory (the origins of the eukaryotes are to be found among the proteoarchaeota), and thus a central aspect of the endosymbiont theory .

In contrast, mature sperm cells primarily use protamines to package nuclear DNA. This is most likely due to the fact that it enables an even higher packing rate to be achieved.

For a while it was believed that dinoflagellates were the only eukaryotes completely devoid of histones. However, later studies showed that their core DNA still contains histone genes.

No core histones are found in bacteria (with the exception of the lysine- rich H1, also known as the nucleoprotein HC1 / HC2). Instead, in bacteria and DNA-containing organelle such as mitochondria and plastids (in particular chloroplasts ) the DNA normally in Nuceloiden (nuclear equivalents) of compacted, for which so-called histone-like proteins' (HLPs, after English histone like proteins , also Bacterial DNA binding proteins ) provide, . These are homologous to one another , but only functionally similar ( analogous ) to the real histones in the nucleus of the eukaryotic cells ( eucytes ). The names are:

These relationships between the histones and HLPs also support the endosymbiotic theory.