The ability to fly has evolved convergently in pterosaurs ( 1 ), bats ( 2 ) and birds ( 3 ). The wings of these vertebrate groups are analogous organs (as forelimbs, homologous organs). In pterosaurs, the wings are carried by the 4th finger, in bats from the 2nd to 5th finger, and in birds essentially by the 2nd finger.

An analogy ( Greek ἀναλογία, analogy of "correspondence") is in biology similarity of the structure of organs , proteins , genes or behaviors of different organisms that each of these phylogenetically arose independently. Accordingly, the common ancestors of these living beings did not yet show this expression. An analogy is often tied to a corresponding function.

The development of analogous features in species that are not closely related is called convergent evolution (also convergent development or parallel evolution ) or, for short, convergence . The existence of convergence means that the mere similarity of a feature does not allow any conclusions to be drawn about relationship. Similar characteristics may only suggest the same or a similar function. A coincidental similarity cannot be excluded from the outset. Especially in molecular biology, when common features occur that are based on analogy and therefore do not say anything about the relationships between the species examined, homoplasia is used .

The opposite - common traits inherited from a common ancestor and therefore similar to each other - is called homology . Homologous organs or genes have the same lineage, but not necessarily the same functions. They can develop apart over long periods of time ( divergence ) and then look very different when the species are compared . The similarity of characteristics between different species regardless of their homology or analogy, e.g. B. If this is unknown or controversial, it is called correspondence .

In general, analogy or homology is only used in relation to characteristics. It has been suggested to relate the terms to the functions as well, but this is not usually common.

Analog organs are not only similar in function, but partly also externally, partly even (superficially) anatomically. But they are phylogenetically different and independently of one another emerged. So they do not depict family relationships. Rather, similar organs only allow conclusions to be drawn about similar environmental conditions and lifestyles.

According to the system theory of evolution, analogous features arise through an interplay of convergent selection pressure and development corridors. They develop in the course of evolution through adaptation to a similar functional requirement and similar environmental conditions. Living beings with analogous characteristics have often adapted to similar ecological niches (see job equivalence ).

The terms analogy and convergence are used particularly frequently in zoology . One example of this is the formation of fins in fish and whales . The fins of the whales have the same function and shape as those of the fish, but historically originated from the limbs of the mammals that used to live on land .

In botany there are also analogous formations of plants. Laypeople often mistake spines for thorns . In contrast to the thorns, spines are only formed from the upper cell layers ( epidermis , cortical tissue ). So they are only surface structures ( emergences ). Thorns, on the other hand, are transformations of the leaves or the stem axis . Such transformations to adapt to special living and environmental conditions are called metamorphosis in botany .

The terms analogy and homology are also used in evolutionary reasoning in molecular genetics and proteomics . In the case of analogous genes or proteins , base or amino acid sequences are sections with the same name, but they are e.g. B. arise through mutations from different genes or genes located in different locations (loci). 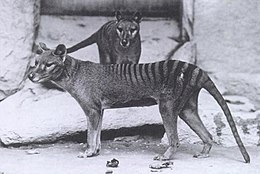 The extinct thylacine , not closely related to dogs, is an example of convergent evolution. 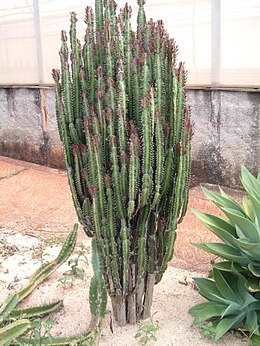 The triangular milkweed, a popular houseplant , is similar to the candelabra cactus.

Classic examples are the skulls of wolves and pouch wolfs or the shape of the anteater and aardvark or even the hedgehog and the Echidna . The cause of such convergent developments that led to analogies are the same selection factors that led to comparable adjustments. "The best known example are the marsupials of Australia [...] since there were no placental mammals in Australia, they developed adaptation types that correspond to those of the northern hemisphere."

Another example are the limbs of various aquatic vertebrates that are adapted for underwater locomotion, e.g. B. turtles , whales and penguins , all of which are modifications of the basic plan of a five-limbed limb and are thus homologous to one another, but have developed independently of one another due to their different origins from legs or wings and are therefore analogous to one another. It is therefore a matter of adaptations to similar environmental conditions that lead to similar forms and functions. If you go back enough in the family tree, however, the reptiles, mammals and birds descend from a common ancestor who has the five-pointed front extremity.

Convergent evolution is assumed even within certain taxa, for example in the mouthparts of insects. Here, the original chewing and chewing mouthparts have developed into different functional types, on the one hand the formation of proboscis in flower-visiting insects, which can absorb nectar very efficiently, and on the other hand the convergent formation of piercing-sucking mouthparts.

The animal lice also developed independently of one another twice in the course of evolution , despite their great morphological similarity . The great correspondence of the parasitic body characteristics is thus the result of the adaptation to the host animal , but not a sign of a close relationship between the animals.

Convergent developments are also known in plants. One example is the succulents : The New World candelabra cactus Pachycereus weberi looks very similar to the triangular milkweed Euphorbia trigona from Africa. The arrangement of the leaf spines and the shape of the flower allow a distinction ( determination ). The similarity is based on the adaptation to the dry and hot location.

Convergence does not only exist in the area of ​​body shape, but also at the molecular level. Ruminants such as domestic cattle and leaf-eating slender monkeys such as the langur Presbytis entellus belong to distant systematic groups, but have a very similar lysozyme molecule that is produced in the stomach.

Further examples of analog organs and structures are

Sometimes the distinction between “analog” and “homologous” depends on the point of view: the fins of dolphins and penguins represent homologous extremities, but the fin structures do not go back to common ancestors. They represent analogous exaptations . In the same way, the wings of bats and birds are analogous developments based on homologous extremities. In both pairs of examples, the common structures of the common ancestors are the forelimbs of Sauropsida about 310 million years ago.

Sometimes the function of an organ that has regressed in the course of evolution is later fulfilled secondarily by an analogous organ when the living conditions change again in the original direction, e.g. B. a land animal returns to the water (example: the whale's fluke as a secondary caudal fin ). In rare cases such as the secondary temporomandibular joint , the transition from the primary to the secondary organ is also direct.

A completely different process than convergence or parallel evolution is coevolution , which describes the adaptations of strongly interacting species. An example are some representatives of the plant genus Hippeastrum (knight's star), whose flower shape is specifically designed for pollination by some species of hummingbird. The shape of the beak of the hummingbird has adapted over time to the shape of the calyx. This joint development has advantages for both types. On the one hand, it ensures that the hummingbirds do not have to compete for food with representatives of other species, as no other animal can reach the nectar. On the other hand, the shape of the bird's body and the fact that it ingests the nectar in flight ensures that the pollen will stick to its breast and that it will pollinate other flowers. The similarity of species due to mimicry , for example the imitation of the wing pattern of a poisonous butterfly by a non-closely related non-poisonous species, can also be understood as coevolution.

Charles Darwin already referred to the similarity of shapes in geographically widely separated regions as parallelism . Later the term was mainly used when closely related species, for example members of the same genus, develop common characteristics independently of one another. This use is still common today. According to this usage, convergence is limited to the development of similar characteristics in only distantly related species. However, not all biologists practice this strict conceptual separation.