Kolibri is a redirect to this article. Further meanings are listed under Kolibri (disambiguation) .

Collection of stuffed hummingbirds in the Natural History Museum , London

The hummingbirds (Trochilidae) are birds and, according to almost all authors, represent the only family of the order of the hummingbird-like (Trochiliformes). They are so closely related, however, to both the sailors (Apodidae) and the tree swifts (Hemiprocnidae) that they sometimes with these in the order of the sailing birds (Apodiformes) are summarized.

The hummingbird family comprises more than 100 genera with a total of 368 species . The name Kolibri was borrowed from French in the 18th century (French colibri ) and probably comes from a Caribbean language.

Among the hummingbirds one can find the smallest bird species ever; the bee elf ( Mellisuga helenae ) measures just 6 cm, including its beak and tail feathers. The giant hummingbird ( Patagona gigas ) is the largest member of the family with a length of approx. 22 cm.

The tongue of the hummingbird is extremely long, can be stuck out and is split and straw-shaped at the tip, so that the nectar can be sucked out of the flowers easily.

A blue- tailed macaw in search of nectar in Costa Rica

Most hummingbirds have brightly colored, shimmering plumage . The head, throat and chest are preferably provided with iridescent colors. The throat of the males is usually brightly colored, with exceptions here, for example the eagle-billed hummingbird . The effect of the play of colors comes about through interference . The iridescent hummingbird feather has several layers of microscopic horn lamellae. If light hits this spring from a certain angle of incidence, it is reflected back by the lamellae. Due to the different position of the slats, the light is reflected in very small time differences. The observer perceives the color of the plumage differently from different perspectives (see photos of the ruby ​​hummingbird below).

In the subfamily Phaethornitinae, the control feathers are greatly elongated.

Hummingbirds are also sometimes to be had for convenience, here not in the typical buzzing flight when searching for nectar .

The flight of the hummingbirds

Hummingbirds fly at a very high frequency of 40 to 50 wing beats per second. With their flexible wings they can fly on the spot, for example to drink nectar. You can also fly sideways and even backwards. This makes the hummingbird the only bird in the world that has this ability. In the hummingbird, in contrast to all other bird families, the hand is larger than the upper arm and forearm. This as well as extreme mobility in the shoulder and elbow joints allow the hummingbird to have almost any conceivable wing position. The chest and upper arm muscles required for this make up a quarter of its total weight in the hummingbird.

In terms of body size, hummingbirds are arguably the fastest vertebrates in the world. Anna's hummingbirds, about ten centimeters in size, reach speeds of 385 body lengths per second (27.3 m / s or 98 km / h) during their courtship flights , with acceleration values ​​about ten times the acceleration of gravity . For comparison: Peregrine falcons swoop at speeds of up to 200 body lengths per second, fighter jets such as B. the MiG-25 (a Mach 3 faster interceptor), on the other hand, only reach a maximum of around 40 times their total length.

The heart of the hummingbird is very large in relation to its body and beats 400 to 500 times per minute, their breathing rate is up to 250 strokes per minute. During sleep, many hummingbirds lower their heart rate sharply to save energy.

Since the entrance and exit of the hummingbird's stomach are very close to each other, the liquid food ingested is transferred from the entrance to the exit when the stomach is full. This means that the flower nectar does not first reach the small intestine via the gizzard , but can reach it directly, where it is split up and fed into the energy metabolism .

The oxygen consumption of the hummingbirds reaches a very high value and is five to ten times higher than that of finch birds, even in resting animals .

Depending on the perspective, the throat plumage of the ruby hummingbird appears red or not.

Hummingbirds have developed the ability to lower their body temperature significantly in order to reduce their metabolism in emergency situations so that they can survive. In hummingbirds, a state of complete indifference ( torpidity ) has also been described. 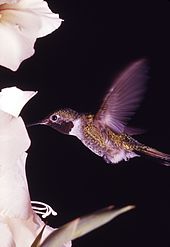 Hummingbirds only live in South America , North America, and the Caribbean . They occur from southern Alaska to Tierra del Fuego . They live in semi-deserts, in the forest areas on the Amazon and in temperate zones in the deciduous forests of Chile. They are found almost everywhere in southern North and South America, except in the subantarctic and boreal zones. Of the 330–340 species, almost 130 live near the equator . Only a good dozen species live in North America north of Mexico , most of them in the southwestern United States . The ruby- throated hummingbird ( Archilochus colubris ) is the only one to breed in eastern Canada and the USA. The pennant tail ( Trochilus polytmus ), the male of which has a tail up to 17 cm long, lives only in Jamaica .

The pigeon tail ( Macroglossum stellatarum ) is a butterfly that lives in Europe and Asia. Standing in the air, it sucks nectar into flowers with its proboscis and is therefore sometimes mistaken for a hummingbird.

The hummingbirds feed mainly on flower nectar . This very energy-rich food makes the power-sapping flight style possible. The hummingbirds are particularly attracted to flowers with striking red or orange colors. More than 7000 hummingbird- pollinated plant species in 404 genera and 68 families are known.

In addition to nectar, hummingbirds also eat small amounts of insects and spiders to ensure a sufficient supply of protein . Pollen and pulp are completely indigestible for hummingbirds and are therefore not ingested.

Play media file
Close up of hummingbirds in slow motion.

The oldest representatives of hummingbirds and their forage plants in a geographical region, such as North America or the Caribbean, are of the same age in evolutionary terms. After colonizing one of these regions, the hummingbird lines were diversified and / or other lines were colonized. It is similar with the hummingbird-pollinated plant groups. Here, too, new species emerged and / or hummingbird-pollinated species emerged in other groups of plants that had not yet been pollinated. 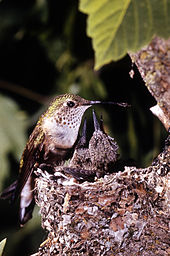 A broad-tailed hummingbird feeds its brood

In order to arouse interest in the females and make them ready to mate, the males perform a courtship dance . After mating, the females build a tiny nest made of cobwebs , plant wool , lichen or moss . The nest is hidden in a bush or tree at a low height. The female lays two eggs two days apart . The brood lasts 14 to 19 days. The young are then fed up to 140 times a day for 3–4 weeks. To search for food, the females drop out of the nest and slide to the ground like a leaf. This makes it much more difficult for nest robbers to locate the hidden nest.

Natural enemies of the hummingbirds are snakes , birds of prey , cats and martens .

The German paleo-ornithologist Gerald Mayr from the Senckenberg Research Institute in Frankfurt discovered what are probably the oldest hummingbird fossils in the world in the Unterfeld mine in Frauenweiler in Baden-Württemberg (district of Wiesloch ). In the journal Science he describes the discovery of two fossils over 30 million years old that resembled the American hummingbirds living today. They are the first hummingbirds found in the Old World.

The skeletons are about four centimeters long, have a long beak to suck up flower nectar, and wings that enable them to float in place. They show the typical characteristics of today's hummingbirds.

Keeping as an ornamental bird

Hummingbirds are considered difficult to keep pet birds. One of the few species that are also kept by private individuals is the violet-eared hummingbird , which has already been bred. 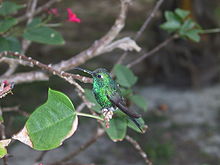