The arachnids (Arachnida; ancient Greek ἀράχνη Arachne "spider") are a class of arthropods (Arthropoda) with over 100,000 known species. Together with the horseshoe crabs , they form the lower trunk of the jaw-claw carriers (Chelicerata). The arachnids include the spiders , but also harvestmen , scorpions , pseudoscorpions and mites (including ticks ).

In contrast to the three-part body of the insect , the body of the arachnid is roughly divided into two parts, prosoma (fore-body) and opisthosoma (abdomen). These links can be clearly separated from each other (e.g. spiders , scorpions ) or they can be grown together ( harvestmen , roller spiders , mites ). The most striking feature are their four pairs of walking legs, which also distinguishes them from insects, which only have three. However, the larvae of many mite species only have six legs, while the first pair of the roller spiders is not used for locomotion, but for touching and orientation. Other extremities are transformed into tools such as poison claws , scissors, feelers or mouth tools. Scorpions have long tails with a venomous sting . Most arachnids are hunters who use poison to kill their prey.

Like all arthropods , which include insects, arachnids have a rope ladder nervous system . In contrast to insects, arachnids do not have compound eyes as eyes , but rather several point eyes with considerably variable performance depending on the species. 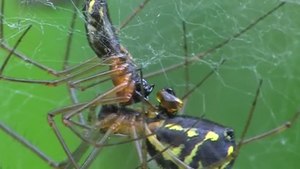 There are various variations in reproduction. Since almost all species live on land (exception: water spiders ), there is very often internal fertilization by a penis-like structure (for example in harvesters). The males of other groups, such as the scorpions and most mites, deposit sperm packets ( spermatophores ) which are ingested by the females. The males of most spiders fill their bulbs (lat. Bulbus "piston, tuber") in the pedipalps on their own sexual organ or on self-woven spermatophores. The bulbs are introduced into the epigastral groove of the females during mating . Bulbs (see third explanation of terms) are the secondary sexual organs of the male of the spider on his buttons.

The following regulations are included:

Simplified cladogram according to Shultz, 1990. Further breakdowns are indicated with –II–.