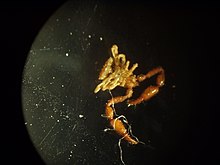 A pseudoscorpion viewed through a dissecting microscope

Pseudoscorpions are mainly found on the ground in the leaf cover as well as in moss cushions and mushroom mats, but also under loose tree bark. They occur in almost all land habitats, including the seashore (stone coasts, for example the largest species Garypus beauvoisie ) and in human dwellings ( book scorpion , Chelifer cancroides ). Some species can be transported by flies , beetles or other insects ( phoresy ) in order to find new habitats . In the tropics in particular, some species are directly linked to specific species of beetles, under whose wing covers they live and also mate. But also in Central Europe there are species that cling to fly legs in order to reach new habitats ( e.g. Lamprochernes nodosus ).

Like almost all arachnids, the pseudoscorpions also live on other, smaller arthropods such as springtails , which they grasp with the pedipalp scissors. Poison glands open into one or both scissor fingers in pseudoscorpions, with the help of which they paralyze the prey. Species with large claws then tear their victims apart, while smaller species bite a hole in their body shell and suck them out.

The physique of the pseudoscorpions is reminiscent of that of the scorpions , mainly due to the pedipalps equipped with large scissors , which are provided with conspicuous sensory hairs ( trichobothria ). In most species, poison glands also flow into these claws. Unlike the scorpions, the abdomen (opisthosoma) is not divided, but like these and in contrast to the spiders without an abdomen stalk, it starts directly on the front body ( prosoma ). The jaw claw ( chelicere ) of the pseudoscorpions is two-part and forms a small pair of scissors, a feature that these animals share with the roller spiders . Spinneret glands often open into these .

The sperm are transferred by stalked sperm packets ( spermatophores ), which are deposited on the substrate by the males. In some species, the males simply drop these packets on the ground without the presence of a female; ingestion by a female is random. Other species perform a “mating dance” similar to that of the scorpions and attract the females using scents ( pheromones ).

The eggs are laid in specially spun brood chambers. The eggs themselves are carried by the female around the genital opening in a secreted brood sac and nourished by secretion from the ovaries. After hatching, the nymphs (proto-, deuto- and tritonymph) are free-living, after three molting the animals are sexually mature. For molting, the animals spin their own molting chambers.

Although pseudoscorpions are outwardly quite similar to the scorpions, they are not closely related to them. Their closest relatives are the roller spiders , with whom they share the similar chelicere and the structure of their tracheal system.

The Central European species of pseudoscorpions belong to the following families (with examples):

The oldest known find of a pseudoscorpion is dated to the Devonian age (approx. 380 million years). With at least 25 identified species, by far the most extensive fossil evidence comes from the Eocene / Oligocene Baltic amber . Pseudoscorpions can also be found in amber from other Tertiary and Cretaceous deposits, but they are very rare. A total of 43 fossil species from sixteen families have been described. Some inclusions of Baltic amber prove that phoretic relationships with various insects existed as early as the Old Tertiary.