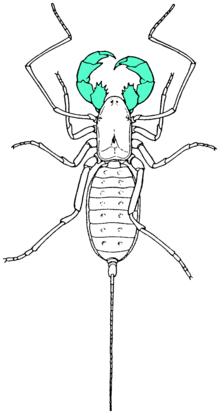 Scourge Scorpio (Thelyphonida) seen from behind. The pedipalps are marked in green.

The end member of the pedipalps of the male large angle spider ( Eratigena atrica ) consists of the cymbium, tegulum and embolus.

The pedipalp is a transformed extremity in the head area of arachnids (arachnida). In arachnids, the paired pedipalps follow the chelicerae or jaw claws as the second pair of extremities and are followed by, in the basic plan, four pairs of legs.

The name Pedipalpus, from Latin pes: foot and palpus: feeler, refers to the primary function of a tactile organ in many groups, especially in weaving spiders .

Pedipalps are built in the manner of walking legs in all groups that have large chelicerae, that is, weaving spiders, roller spiders, palm runners as well as many mites and harvestmen, with many roller spiders and tarantulas they are also used for running. The structure of the spiders is similar to that of the walking legs, but has one less limb (the metatarsus is missing). In the orders with rather small chelicerae, such as scorpions , flagellum scorpions , flagellum spiders , pseudoscorpions , they are held horizontally and usually carry clear scissors (chela), in which a flexible scissor finger formed from the foot phalanx against an immobile finger formed as an outgrowth of the splint is working. All arachnids use the pedipalp to hold and turn the food. As a rule, it is also richly equipped with sensory cells and is used for feeling, smelling and tasting. Only in the pseudoscorpions does a poison gland open into its tip.

In numerous groups, the basic limb of the pedipalps, the coxa or hip, is partially redesigned to serve food intake. For example, most spiders have broadened areas that are known as shops (also known as chewing, gnathocoxes or gnathobases), these are part of the delimitation of the outer mouth and are often markedly bristled. Contrary to the naming “chewing shop” they are not actually used for chewing food in any group of the Chelicerata. In the mites, the hips of the pedipalps are fused into a tubular structure called the gnathosoma.

Within the Arachnida, the Pedipalpus and the Chelicere were modified in many ways, especially through the multiple convergent equipment with scissors. These formed with the scorpions, flagellum scorpions, pseudoscorpions and hooded spiders . In the case of the pseudoscorpions, they are also equipped with poison glands.

The pedipalp was also restructured within the weaving spider . Here it serves as a sperm carrier in the male animals.

In male spiders, the last limb of the pedipalp, originally the foot limb , has been converted into a mostly three-part palp organ. This palpic organ is called the globe and contains a cavity inside for the transport of the sperm ( spermatophore ). It is filled by the males at their own sexual opening or at a sperm net . Since the globe itself contains neither nerves nor muscles, the filling, as well as the later emptying, is purely hydrostatic, by means of hemolymph pressure. In addition, the seminal duct (sperm duct) of most spiders has porous walls that are surrounded by a glandular epithelium.

During mating, a specialized part of this organ called an embolus can be inserted into the female genital opening. For this, the basal sclerites on the organ, called the cymbium, must be matched to the sexual opening of the female; these do not take part in the mating itself, but have numerous sensory hairs. Numerous other, depending on the group, differently designed sclerites, some of which are moved against each other like a lever during expansion, anchor the globe in the female genital opening called epigyne, which has mostly developed equally specialized, precisely matching structures. Accordingly, one speaks here of a key-lock principle . Often the tibia, occasionally further leg sections of the pedipalps, are characteristically redesigned, they often have special appendages (apophyses). Within many groups of weaving spiders, precise species identification is only possible on the basis of these structures. The females usually have a spermatheca that acts as a collecting container.

In haplogynous spiders, the globe is simply built and usually uniformly spherical or pear-shaped. In entelegynous spiders, the globe consists of several mutually movable sclerites and membranous hematodoches in between. The first sclerite is the cymbium . The cymbium covers the median, largest sclerite of the globe, which is called the tegulum and contains the spermatophore. Then follows the embolus , the actual sperm-transferring organ. It carries the mouth of the spermatophore at its tip and can be very long and rolled up like a tube.

Other functions include touching through the thick and long hair, drumming or plucking the net for intra-species communication, e.g. B. at courtship or on the substrate, presumably for orientation, z. B. in jumping spiders . Some species also have stridulation organs on or in the pedipalps.

Homology of the pedipalp segment

The harvestman has angled the pedipalps in a triangle towards the mouth opening.

Pedipalps occur within the arthropods exclusively in the Chelicerata. They form a pair of extremities that attach to one of the body segments in the head section. It is assumed that all pairs of extremities of the arthropods (and also the columbus and tardigrade combined with them to form the Panarthropoda ) are serially homologous ; This means that the sequence of the segments (and their extremities) is the same in the basic construction plan inherited from the common ancestors, but each group is transformed in a specific way. Which segment of the other arthropods is homologous to the segment that produces the pedipalps in the Chelicerata has long been disputed in science. Based on developmental and genetic studies, especially the expression of the so-called Hox genes , it was possible to show that the pedipalpen segment is the one that produces the third section of the arthropod brain ( upper pharyngeal ganglion ), the tritocerebrum , inside the body. According to this, the pedipalps are homologous to the second antennae of the crustaceans . The pair of extremities of this segment has been lost in the insects (intercalary segment). Accordingly, the pedipalps are not homologous to any of the insect's head appendages.