A spider web is a construction made by weaving spiders (Araneae), especially the recent species of limb spiders , which is mainly used to catch prey (almost always insects ). The threads of the spider web consist of spider silk, which is synthesized in the spinneret and excreted via spinnerets and / or spinning bobbins (see silk secretion ). Clusters of old cobwebs are called cobwebs .

In relation to its mass, spider silk is four times as resilient as steel and can be stretched three times its length without tearing. This is why the spider web can usually withstand the force of the impact of a flying prey insect without tearing. The spun threads are light and waterproof, but still have a high water absorption capacity that is comparable to that of wool . They resist microbiological attacks and are still biodegradable.

Thread types and use 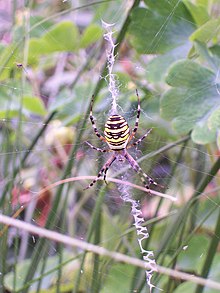 Wasp spider in the web with stabiliment

The threads used are produced in different diameters or compositions, depending on the purpose, and can be made completely or partially adhesive . As a rule, a thread consists of several individual threads. The adhesive power of silk is based on glue or on microscopically fine wool. Some species use their threads as signal threads and actively seize their prey, line their caves with antibiotic silk and use them to weave cocoons for their offspring or sperm nets to facilitate reproduction, or they can tie up and preserve their prey. In all spiders, the attached thread serves as a safety line on which the animals can abseil in case of danger. Small juveniles and the canopy spiders in particular produce a thread of flight which, by means of ballooning , enables them to travel long distances (several kilometers) through the air and colonize new habitats.

A spider usually pulls a thread behind it, and this can be used both for protection against falling (from moving plants) and for orientation. Pheromones and other substances can be added to the silk , which enable species to be recognized in some species and which are used by male spiders to find females ready to mate. The silk is also used mechanically for communication. The males of some bicycle net building species can only approach the female after pulling signals on the net. Plucking is part of the courtship ritual . A spider can use the vibrations of its web to determine the approximate size and location of a prey that has become entangled.

The nets or the constructions made of silk, for whatever purpose, are based on different and very diverse patterns, which enable the different ways of life of this extraordinarily diverse group of spiders . The best-known form of web is the web of orb web spiders, which in principle consists of different functional areas: safety net, living space / hiding place (retrait), auxiliary threads (bridging, tension, stumbling, signaling and communication threads, etc.) as well as egg cocoons, sperm nets, stabilizers , Camouflage etc. v. a. m.

Not all species of spiders build webs. Jumping spiders lurk on the ground for their prey and leap at the insects. Crab spiders live in flowers , their body color is adapted to the flower, and thus catch flower-pollinating insects. The jumping spiders and hunting spiders mentioned above use their silk to build egg cocoons, for safety lines and for communication. 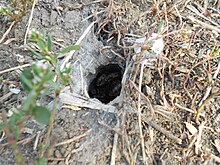 South Russian tarantula ( Lycosa singoriensis ) in its living tube lined with a web. 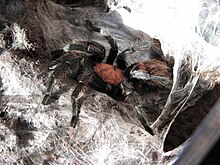 Red tiger tarantula ( Davus fasciatus ) on the web of your web.

In spite of this, many free-hunted spiders create more extensive webs, which then do not, or not primarily, serve to catch prey, but mainly as the spider's abode. The spiders leave the web to catch their prey and return to it when the activity time has expired. In order to find their way back to their hiding place in the event of a threat, the spiders put on orientation threads, with the help of which they can find their way back to their hiding place and seek protection there, for example when encounters with predators (predators) or when it rains. They are also used for wintering. In addition, residential webs are not infrequently used as a place of residence for young animals of these spider species in their first days, including their mother, who then guards the offspring, before the young animals become independent. Spider families with species that create webbing include: 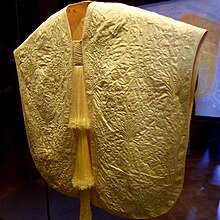 In the 19th century, garments were woven from real spider silk. The last time a robe made of this special silk was shown at the World Exhibition in Paris in 1900, said the Victoria and Albert Museum , which exhibited a cloak made of spider threads in January 2012. To do this, 80 employees collected the threads of countless spiders for five years.

Even today attempts are made again and again to use spider silk.

Spider silk has interesting properties for technical use. The efforts of research to produce spider silk artificially are correspondingly great; but only with moderate success: to this day the correct mixture of proteins is not known. There is plenty of demand, from designers at NASA who want to construct a space elevator from such a material , to manufacturers of bulletproof vests who expect particularly light vests. Genetic engineering seems to bring the goal closer. Genetically modified microorganisms ( e.g. Escherichia coli ), which contain the genetic information for the desired silk protein, can be attracted in bioreactors and produce the desired crude protein after chemical induction. After the cells have been harvested, the silk proteins only need to be separated from the cell debris and bacterial proteins. Crude protein produced in this way can be processed into films, foils, spheres and capsules. Only the production of silk threads is currently not technically possible.

In 2010, the press reported that they had succeeded in planting spider genes in goats and thus getting them to produce spider silk in their milk. The reports went back to the Canadian company Nexia Biotechnologies Inc., which had set up a herd of transgenic goats and wanted to market the product under the name "Biosteel". After Nexia went bankrupt, Randy Lewis of Utah State University, USA, took over some of the animals. Although the experiments with goats have obviously not progressed to market maturity, the technology of the transgenic production of spider silk, also from mammalian cells, continues to be intensively researched.

A promising variant of producing spider silk using bacteria has also been developed by researchers at the Technical University of Munich. Also a form of artificial spider gland for spinning the threads. A demonstration plant is to be built with the company AMSilk to produce the spider silk on an industrial scale .

Scientists have experimentally succeeded in packing medicinal substances with artificial spider silk and thus ensuring the transport of the active substances to the desired location. These capsules are characterized by neutrality for the immune system and high elasticity and are almost chemically resistant to osmotic pressure . The release of the active ingredient could take place through proteases (natural enzymes break down the protective cover from the outside).

Production: Protein molecules are dissolved in the active ingredient in small water droplets. These water droplets are coated with an oil, thereby forming a phase boundary ( interface ). Since the proteins are soluble in polar and non-polar media, they settle at the interface and form a beta-sheet structure , as occurs in spider threads. This process only takes a few seconds.