In the late 1930s, William Astbury began to perform crystal structure analyzes on crystalline peptides . It was found that certain spatial features repeat regularly, where hydrogen bonds within the molecule were suspected. However, he was not yet aware of the planarity of the peptide bond . The most common spatial structures were later called α-helix and β-sheet. Linus Pauling , Robert Brainard Corey and Herman Branson proposed a model of the β-sheet in 1951. The β in "β-sheet" does not contain any scientific statement, but only expresses that the β-sheet was found after the α-helix. The name Faltblatt results from the three-dimensional structure of the β-pleated sheet, whose “zigzag shape” resembles a regularly folded sheet of paper.

Because of the side chains, β- pleated sheets are not flat, but fluted like an accordion ( pleated ). The polypeptide chains of a sheet are called β-strands. These strands can be linked in different ways: 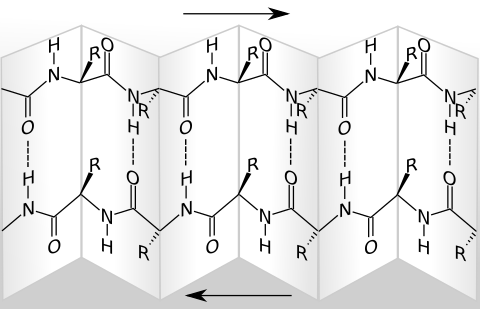 The three-dimensional representation is reminiscent of a folded sheet, with the peptide groups in the surfaces and the carbon atoms in between lie on the edges of a sheet that has been folded several times. The peptide bonds of several chains interact with each other and form hydrogen bonds along the polypeptide backbone. These occur in pairs of two at a distance of 7.0  Å and ensure the stability of the structure. The distance between vicinal amino acids is significantly larger in the folded sheet with 0.35 nm than with the α-helix with 0.15 nm.

However, the side groups in the β-sheet are very close together, so that bulky or similarly charged residues disturb the arrangement. Larger structural areas of the leaflet only come about if the remains are relatively small. The protein chains of natural silk , which are arranged exclusively in the sheet structure, consist of 86 percent glycine , alanine and serine , i.e. amino acids with small residues. Another example of proteins with a predominantly sheet structure are immunoglobulins . If large amino acid residues are predominantly present, the polypeptide chain is preferably arranged as an α-helix.

Representation of an anti-parallel β-sheet. The atoms of the amino acids involved and the hydrogen bonds are shown as opaque.

In addition to the α-helix and the β-sheet, there are other types of secondary structure motifs. The parts of the primary structure of a protein that do not belong to a motif are called random loops ( random coil structures ). These structures play a key role in the formation of the entire protein structure .

Other common motifs are: