A peptide is an organic compound that contains peptide bonds between amino acids . Oligopeptides with few amino acids are differentiated from polypeptides with many amino acids according to their number . Long polypeptide chains are also referred to as proteins , especially those formed by protein biosynthesis .

Organisms can only form peptides by translation from α-amino acids of the L -form, because only the genetically coded amino acids that are bound to a tRNA are available for this process . Chance of different creatures are found in rich and D -amino acids in peptides, however, these are products of specific metabolic pathways of a non- ribosomal peptide synthesis and not the protein biosynthesis . Peptides fulfill a large number of physiological functions and can, for example, act as hormones , while others show anti-inflammatory or pro-inflammatory effects; there are also antimicrobial peptides with antibiotic or antiviral effects. In some cases, their mode of action has been well researched.

The term peptide was first used in 1902 by Emil Fischer for the starting materials of the protein degradation products by pepsin in the peptone (from Greek πεπτικός peptikos , digestible 'or πεπτός peptos ' cooked'), understood as being made up of monomers , analogous to a polysaccharide . 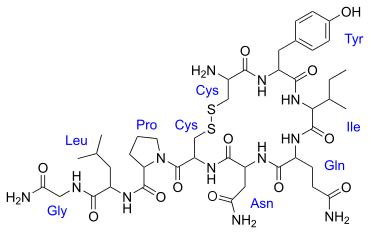 Oxytocin is a nonapeptide . Nerve cells in the hypothalamus use a precursor protein (106 amino acids) to form this oligopeptide as a messenger substance and also release the neuropeptide in the (neuro-) pituitary gland so that it acts as a neurohormone .

During the condensation of amino acids, the carboxy group of one amino acid formally reacts with the amino group of the other amino acid to form the acid amide group -CO-NH- with elimination of water , and the newly made amide bond between the carbon atom of the carbonyl group and the nitrogen atom becomes a peptide bond . The free amino group at one end of the peptide is called the N terminus , and the free carboxy group at the other end is called the C terminus .

The peptide bond is not freely rotatable because there are two resonance structures. This plays an important role in the structure of proteins.

In general, peptides are differentiated according to the number of amino acids that make up a peptide molecule. The number of possible combinations increases exponentially, to the base 20 when restricted to the 20 canonical amino acids of protein biosynthesis.

In most peptides the linked amino acids form chains; the ends are referred to as N - and C -terminus refers to the number of amino acids as chain length. In cyclopeptides two or more amino acids are annularly connected to one another.

Proteins mostly consist of polypeptide chains of over a hundred amino acids. Due to protein folding, they have a certain spatial structure that is essential for their biological function and can be stabilized by means of disulfide bridges . Proteins can also aggregate and form a protein complex , such as hemoglobins .

Oligopeptides are chemical compounds that consist of up to ten amino acids that are linked to one another via peptide bonds .

Oligopeptides play e.g. B. as components of enzymes a role in detoxification, transport and metabolic processes .

A polypeptide is a peptide that consists of at least ten amino acids linked by peptide bonds . Polypeptides can be of either natural or synthetic origin. Polypeptide chains with more than 100 amino acids are usually referred to as proteins ; however, other prerequisites are necessary for a protein, such as a certain protein folding .

Macropeptides are high molecular weight peptides. If these are linked by hydrogen or disulfide bridges , one often speaks of proteins. However, some amino acid chains with more than 100 amino acids are only referred to as peptides.

Cyclic peptides consist of two or more amino acids arranged in a ring. Therefore, cyclopeptides have no C -terminal and no N -terminal amino acid. All cyclic peptides are therefore lactams at the same time . Cis peptide bonds are present in the circular peptides , while trans peptide bonds dominate in most native (chain-shaped) proteins . 2,5- Diketopiperazines are the simplest cyclic dipeptides. Some antibiotics are cyclopeptides, e.g. B. Ciclosporin .

Strictly speaking, peptides are formed by linking α- amino and carboxy groups of α-amino acids, which are then linked via α- peptide bonds .

Mixed forms also occur in nature, for example the tripeptide glutathione (γ- L -glutamyl- L -cysteine ​​glycine) contains one α-peptide bond and one ω-peptide bond. The peptide bond between the pendant ε-amino group of L- lysine and the pendant carboxy group of aspartic acid or glutamic acid is also called an isopeptide bond .

In the cells of living things, individual polypeptide chains are built up on the ribosomes , which then unfold to form proteins . This ribomosomal peptide synthesis is also called protein biosynthesis.

The technical-chemical synthesis method of choice for a peptide of a certain sequence differs depending on its length:

If an attempt is made to produce a certain dipeptide (e.g. Gly-Val) from two different amino acids (Gly + Val) by thermal dehydration, a number of undesirable products arise in considerable quantities:

In order to increase the selectivity , the carboxy and amino groups that are not to be linked are provided with a protective group (e.g. ester, Boc , Fmoc ).

Various coupling reagents are used which activate the unprotected carboxy group of one amino acid and thus enable the linkage with the amino function of the second amino acid under mild conditions. There are different classes of such coupling reagents:

After the peptide bond has been made in this way, one of the two protective groups is selectively removed. It can then be coupled again with a further appropriately protected amino acid, etc. At the end, all protective groups are removed and the desired peptide is isolated.

The synthesis can take place in the liquid phase or as a solid phase synthesis . In addition, enzymes can also be used for peptide synthesis .