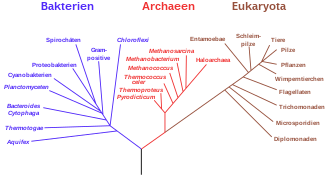 Phylogenetic tree with the three domains (according to Carl Woese et al., Based on the sequences of the rRNA )

The domain ( English domain ) is in the now generally accepted systematic classification of living things according to Carl R. Woese ( University of Illinois ), Otto Kandler and Mark L. Wheelis, the highest classification category .

One can also distinguish living beings according to whether there is a nucleus in the cells or not. This division into only two groups was common in the past. However, it is not based on the relationships and is therefore not a systematic classification.

Viruses , viroids and prions , which are not generally classified under living beings, are subject to their own classification . The corresponding domain of rank above Reich is there as a range ( English realm hereinafter).

The systematic classification of living beings is based on their relationship. According to this system, all living beings are divided into three domains today:

This systematic subdivision is primarily based on the different structure of the ribosomal ribonucleic acid (rRNA). Bacteria and archaea also differ in the composition of their cell membrane and in the biochemistry of their metabolism . The eukaryotes differ from the other two domains by the nucleus in their cells.

The term eukarya or eucarya is also used for the domain eukaryota . Woese , Kandler and Wheelis used the notation Eucarya in their proposal published in 1990 for the division of living beings into three domains .

Alternative classification according to the cell structure

Based on their cell structure , all living things can be divided into two groups:

In the earlier system of living things, no distinction was made between bacteria and archaea. The archaea were counted among the bacteria because, like the bacteria, they have no nucleus: