Alma Mater statue of the UIUC 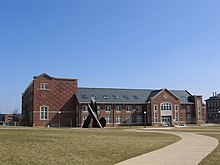 The Urbana-Champaign ( University of Illinois at Urbana-Champaign , UIUC) campus is the most significant and respected of the three locations. With around 40,000 students, it is also the largest of the three. It is located in the cities of Urbana and Champaign , which now form a twin city, as well as in rural areas outside the city limits. There are 18 faculties with over 150 courses on this campus. The Urbana-Champaign campus was ranked 20th best university in the US and 26th best in the world in the internationally renowned ranking of the Institute of Higher Education, Jiao Tong University Shanghai. The undergraduate program was ranked the 38th best in the US (2008 ranking of all universities) and eleventh best of all US public universities by US News and World Report . Particularly noteworthy is the Faculty of Engineering, which is in third place. Because of its high academic standing, UIUC is often referred to as a Public Ivy .

The university is home to the National Center for Supercomputing Applications, NCSA , among others . Here, for example, the Mosaic browser was designed or the NCSA Telnet was created, and various supercomputer projects have been promoted at the university since the 1950s ( ILLIAC ). The electrical engineering faculty also enjoys a worldwide reputation as the birthplace of the first light-emitting diode ( LED ). The semiconductor technology has been researched intensively here in the 1950s and 1960s, and were several Nobel laureates and are active in teaching and research at UIUC.

The size and importance of the university is evident in various details; UIUC is one of the few universities that has its own airport. The airport Willard Airport is used, among other things, for research projects. Without the support of the university it would no longer be commercially viable; the commercial airlines rely more on large, central airports such as O'Hare International Airport near Chicago, and for Downstate Illinois the location of Bloomington-Normal airport is more central, but significantly less favorable for the university.

Furthermore, one of the largest public university libraries in the world is located here , the main part of which alone comprises more than 22 million volumes and more than a million daily accesses via the online catalog. An extension to the library was built underground so that the oldest experimental field in agricultural research, Morrow Field, where the current experiment has been going on for over 100 years, is not overshadowed.

The number of student associations also ranks first in the USA with 44 "fraternities" and 20 "sororities", which have a total of around 29,000 students as members. 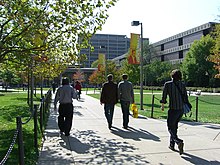 The campus of the University of Illinois at Chicago (UIC) is the largest university in the Chicago area with around 25,000 students and has changed several times over the years. First he was at Navy Pier, where he served from 1947 as a two-year college mainly to train soldiers who had returned from the Second World War. In 1965 the campus was relocated to its current location, renamed "Circle Campus" and run as a four-year college. In 1982, the Chicago Circle Campus merged with the University of Illinois Medical Center, which was founded in the 19th century, and thus formed today's University of Illinois at Chicago. There are over 100 university buildings on an area of ​​1.2 km². The annual budget is more than $ 1 billion. The medical faculty in particular has a very good reputation. Along with affiliated offices in Peoria , Rockford, and Urbana-Champaign, it is the largest medical school in the United States with approximately 1,300 students.