Springfield , the Sangamon River area, is the capital of the US -amerikanischen state of Illinois . At the same time, the city is the administrative seat of Sangamon County .

Springfield is on the famous former Route 66 , which has been largely replaced by Interstates 55 , 44 and 40 .

The city was originally called Calhoun, named after Senator John C. Calhoun . In 1832 it changed its name to Springfield. The area of ​​today's city was first settled by whites around 1818. Springfield has been the capital of Illinois since 1837. In 1838 the Potawatomi Trail of Death ran through Springfield; it was a forced death march by the Potawatomi Indians.

During the Civil War , Springfield played an important role for the Northern States . The Illinois regiments were trained here. Including those who achieved a winning streak between 1861 and 1862 under the leadership of General Grant .

Camp Butler , 11 kilometers northeast of Springfield, was a training camp but also a prisoner of war camp . While businessmen made money from the soldiers, citizens of the city complained of wrongdoing by soldiers who were not on duty. After the war, Springfield became an important transshipment point in the US railroad. The mining industry was also the city's largest employer. In 1908 there were racist riots in which seven uninvolved blacks were murdered. This crime led to the creation of the NAACP . On March 12, 2006, Springfield was hit by two tornadoes , which wreaked havoc.

On February 10, 2007, Senator Barack Obama announced his candidacy in Springfield, on the steps of the Old State Capitol . In 2008 he was elected the first black president of the United States. 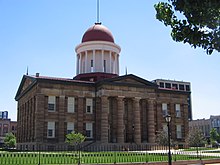 The city has numerous landmarks associated with the 16th President of the United States , Abraham Lincoln . Lincoln founded a law firm here in 1837 with attorney John T. Stuart and was also buried in Springfield. The Illinois State Capitol , the State Museum, and other buildings related to Springfield's function as the state capital can also be viewed. The Dana Thomas House, which was designed by Frank Lloyd Wright , is also open to the public within certain opening times. In August, Springfield hosts the Illinois State Fair , a fairground display of agricultural and industrial products.

The city is a center of trade and finance and is located in one of the most fertile grain growing and ranching regions in the United States . Springfield's industrial operations produce machinery, convenience foods, hardware, electrical appliances, building materials, paints and mattresses.

The racial the population was composed of 75.8 percent white, 18.5 percent African American, 0.2 percent Native American, 2.2 percent Asian and 0.7 percent from other ethnic groups; 2.6 percent were descended from two or more races. Hispanic or Latino of any race was 2.0 percent of the population.