A founding city is a city whose origins go back to a specific founding act and which in most cases did not grow slowly from a small settlement.

There were waves of city foundings in many epochs, for example

Founding cities of the Middle Ages 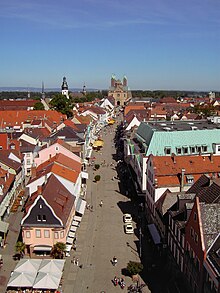 Until around 1100 there were few cities in the territory of the Holy Roman Empire . These either went back to the founding of Roman cities , or grew up from larger clustered villages (e.g. Soest ), some were also founded as trading centers (e.g. Haithabu / Schleswig ). Speyer was created around 1030 with a monumental street market ( Via Triumphalis ) and is considered to be the earliest planned city of the Middle Ages in Germany.

Shortly afterwards, a wave of city foundations began, in which the vast majority of the cities that exist today were created. The starting point was the founding of the city of Freiburg im Breisgau in 1118 by Duke Konrad von Zähringen , who granted it market rights in 1120 and city ​​rights with extensive self-government . The urban area was equipped with establishing a regulated road and into individual plots parceled .

There are new hypotheses for the design of the city plan, which are presented below. Many cities were laid out next to an older farming village like in Göttingen or a pre-urban market and castle settlement like in Posen (Poznań). Elsewhere, an existing trading center was legally upgraded, such as in Bremen . Where the founding of the city followed a change of rule, the new founding could also be several kilometers away from the predecessor town, for example Lübeck upstream of the Slavic trading center Liubice or Schweinfurt 2 km downstream of the margravial castle.

Motivated by the success of the founding city of Freiburg, the Zähringen dukes founded many other cities in their territory, such as Rottweil , Villingen and Bern . Other rulers followed suit, and the founding wave spread across the entire empire. A prime example of medieval town planning (linked town and church planning) is Wiener Neustadt in Austria, which was founded in 1192 by the Babenbergers .

The concept of the medieval city founding as a foundation was of an economic nature. The sovereign invested in the infrastructure and fortifications of the new city and attracted new residents to the city through privileges such as release from serfdom and self-administration, which is where the saying " city ​​air makes free " comes from. In return, the citizen had to pay taxes to the sovereign. This concept was very successful, the new cities flourished economically and thus became an important source of income for the nobility. Later the wealth of the bourgeoisie even exceeded that of the nobility and clergy, and the nobility became financially dependent on the bourgeoisie.

Features of these cities were:

With the German settlement in the east in the Middle Ages, the wave of city founding went far beyond the eastern border of the empire at that time.

Some of the medieval cities that appear today as a unit were the result of various separate foundations in the immediate vicinity, particularly pronounced in Braunschweig and Prague . The Czech capital consisted of the Old Town, Lesser Town (under the Hradschin Castle ), New Town , Hradschin (behind the Hradschin) and Josefstadt . These settlements had separate administrations and separate infrastructure, such as markets and parish churches. In some places the sub-cities merged into a community after a few decades, in Prague it took centuries.

The southwestern French bastides were founded in connection with the conflict between France and England since the marriage of Henry Plantagenet to Eleanor of Aquitaine in 1152.

In Tuscany , the so-called Terre nuove were founded by the Republic of Florence from the end of the 13th century , a series of five established founding cities, the prototype of which is San Giovanni Valdarno .

The start-up boom ended in the second half of the 14th century with the waves of plague and the associated decline in population.

In the period that followed, very few cities in Central Europe were founded.

In contrast to the ancient city, medieval urban planning hardly knows such exact, regular, right-angled city structures. Many smaller founding cities have a continuous street with a market as the basic axis, to which parallel streets were laid. Even in larger cities there are recognizable regular road systems. So far, however, there have been too few large-scale archaeological evaluations to determine whether these go back to an original plan or a later reshaping. The latter is suggested, for example, in Villingen; it has even been proven in Neubrandenburg . Analyzes of foundation plots in Swiss city center excavations (e.g. Burgdorf ) show that no exact dimensions were used here, but only plots of more or less equal width were created. This may be based on individual increments.

The architects Klaus Humpert and Martin Schenk carried out measurements of the floor plans of medieval city foundations and came to the conclusion that their streets, city walls, as well as the positions of gates, towers and fountains could be determined using geometric constructions with rulers and compasses. They therefore formulated the thesis that city plans had been precisely measured before the development of the area began, and they demonstrated this using examples of many medieval city plans. The motivation of the city's founders and planners to use geometric constructions made of circular arcs, triangles and various axes has not yet been clarified. On the archaeological side, Humpert's theses were rejected due to methodological objections and an insufficient understanding of the sources. Some of the Humpertian reconstructions are not possible due to the historical topography (e.g. an important reference point in Speyer lies in the medieval course of the Rhine ).

Since the complex "construction" of a founding city such as B. Esslingen am Neckar or Speyer requires a written fixation of the construction, the thesis of Humpert and Schenk who u. a. Contrary to the finding made by Günther Binding that there was no evidence of a written building plan before 1450 (?).

Erwin Reidinger traces the construction (staking out, surveying) of medieval founding cities (e.g. Wiener Neustadt, Marchegg ) back to a right-angled axis cross and states that he was able to prove this simple method in antiquity (e.g. Herodian temple complex in Jerusalem, Roman legionary camp ). Obviously, this was an unwritten rule of technology that did not require a written specification. For the areas of the German East Settlement ( Germania Slavica ), Winfried Schich has done particularly intensive research into the founding of cities. The art historian Ulrich Reinisch takes a clear opposing position, who rejects the exact right angles in favor of slight curves and offset corners, which offer romantic sights and which prevent the straight bombardment of streets.