A foundation is an institution that uses assets to pursue a purpose defined by the founder . The term foundation (from the Latin fundātiō) is also used synonymously.

Foundations are in some ways similar to endowments . However, the latter are usually given by the public sector or by a large number of people. In addition, the idea of ​​endowments is not to touch the basic assets, but on the contrary to invest and increase them if necessary in order to finance the non-profit organization from the return . Endowments are especially common in the Anglo-Saxon legal community . 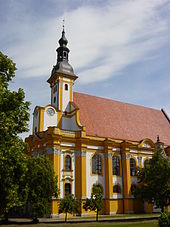 Church of the Neuzelle Monastery ( Niederlausitz ), donated on October 12, 1268 by Margrave Heinrich the Illustrious 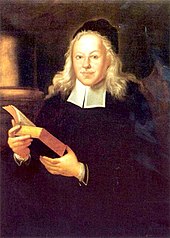 Among other things , August Hermann Francke founded orphanages with donations

Foundations have a long tradition. Already Plato had with which he founded the Academy a v of the 347th Established an existing foundation until AD 529. In the Middle Ages , as a pen , they arose from the pious thoughts of the founder , who also had the security of his own salvation in mind, but also as a founding town or settlement , which let the founder hope for good returns as a liege lord .

Typical of the Middle Ages are memorial foundations (memories), which served to maintain the memory of the founder. Many of these foundations existed until the Thirty Years' War , some even until secularization , some to this day. Benevolent deliberations led to social foundations such as hospitals , orphanages, and other charitable institutions.

Resettlements both for colonization , after successful campaigns (conquests) and after depopulating natural disasters (such as epidemics ) have always been an important part of politics. The foundations of settlements in the German-speaking area include the early founding of monasteries in the early days of the Holy Roman Empire in the southern and eastern peripheral areas by the orders of colonization in order to serve as the nucleus of both settlement and mission , the German East Settlement and the founding cities of the late Middle Ages. For example, place names with -stift are preserved, especially in the East Bavarian region, which refer to clearing areas paid for by sovereigns .

Historically, the German foundations are among the great continuities in a country characterized by discontinuities. Famous churches and monasteries are visible signs of early foundation activity. The Bürgerspitalstiftung in Wemding in Bavaria , which has existed from 930 until today, dates back to the 10th century. From 936 to 1802 of was I. Otto donated Damenstift Quedlinburg . By the 13th century at the latest, when Roman law began to regain a foothold in Germany, the social structure changed and considerable urbanization began, numerous foundations were created that have survived all the vicissitudes of history. The Bürgerspital zum Heiligen Geist Foundation in Würzburg, founded in 1316, is just one of around 250 examples of foundations that are more than 500 years old and still exist today. The well-known Fuggerei Social Foundation in Augsburg, which is considered to be the oldest social housing estate still in existence, was moved into by the first residents in 1519 (foundation letter from 1521) and is therefore a few years younger than Valentin Ostertag's social foundation .

The anchoring of the foundation in the timeline obviously makes it particularly attractive when orders collapse or change. This has to do with the fact that donations were often seen as an instrument of social integration. This applies, for example, to the time after the Thirty Years' War (the most prominent example are the Francke Foundations in Halle (Saale ), founded in 1698 ), to the time after the end of the Old Reich (Stiftung Städelsches Kunstinstitut , 1815) or to the early days ( Carl- Zeiss Foundation , 1889). After the First and Second World Wars , there were hardly any new foundations in Germany. The hyperinflation of 1923, the rule of the National Socialists, the so-called zero hour on May 8, 1945 and the communist government in the GDR brought many existing foundations to a standstill, be it through the depletion of property, expropriation or for other reasons.

Only very slowly were new foundations established in western Germany from the 1950s, and in eastern Germany from the 1990s again. Changes in non-profit law and civil law on foundations (from 2000) and the associated broader public discussion about the meaning and value of foundations, combined with the strong growth in private assets and the resurgence of the idea of civic engagement, have ensured that today will be a year from now about as many foundations are set up as there were 20 years ago in a decade. In addition to private donors, companies, clubs, associations and regional authorities are increasingly appearing as donors.

Regarding the term donation or foundation , Johann Christoph Adelung stated in the grammatical-critical dictionary of High German dialect (1811) that this

In the latter sense, the term for the foundation, a permanent establishment, was transferred. Adelung explains under the term donation :

“To be figurative, the reason for the existence of a thing for all future times. (a) In the broadest sense, where it is only common in a few cases. At which place I will make a memory of my taking, 2 Mos. 20, 24. Make an eternal memory, a good, a bad memory. The first testament was not made without blood, Ebr. 9, 18. Establish a Feyertag, a festival, arrange and arrange it for all future times. Establish an empire, found it, acquire and collect the subjects for it. To create one people, one generation. Founding a church service, an order, a city. But creating a law, etc., are no longer common. (b) In a narrower sense, the establishment of an establishment is not only to order and set up, but also to determine and instruct the necessary costs in a permanent and permanent manner for the same continuation. Donate a monastery, an altar, a canonicate church, a diocese, a poor house, a hospital, a university, an academy, a school, a public solemnity. Where it is probably used by the property that is destined and exposed to it. Donate one's fortune to a monastery, donate a capital to a donation, to donate alms, determine, suspend and deposit it for all subsequent times. But of people, as in the German Bible, priests, fortune tellers, singers donate, is out of date. In the broadest sense it is often merely contained in the ground of a thing, giving it the origin, of existence, so that the concept of duration and stability largely disappears, but the concept of applied effort often appears. Make peace between two arguing parties. Create friendship with one another. Establish an alliance. Bringing a marriage between two people. "

In the Duden , the pen or foundation is largely only cited in its modern form.

In the case of foundations, the assets are usually preserved in the long term and the beneficiaries can only enjoy the income .

As a rule, a foundation has statutes which, among other things, stipulate the purposes and the manner in which they are implemented. Externally, the foundation is represented by a board of directors (which can also be named differently), but additional foundation organs and committees (often a board of trustees ) can also be set up in accordance with the statutes . A foundation with legal capacity - the most common legal form in Germany - has, unlike an association, no members and, unlike a society, no shareholders or owners. It is subject to the state supervision of foundations .