The title of this article is ambiguous. Further meanings are listed under August Hermann Francke (disambiguation) .

August Hermann Francke (born March 12 . Jul / 22. March  1663 greg. In Lübeck , † 8. June 1727 in Halle an der Saale ) was a German Protestant theologian , pastor, educator and hymn writer . He was one of the main representatives of Halle Pietism and founded the Francke Foundations in 1698, which still exist today .

Grades from Selecta at Gotha grammar school in 1677; August Hermann Francke is by far the youngest at the bottom.

Memorial plaque on the lodge house 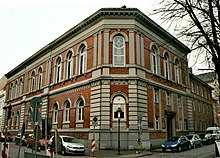 Lodge house in Lübeck; Francke's birthplace was at this point

Francke was the son of the lawyer and the last syndic of the cathedral chapter at Ratzeburg Cathedral Johann Francke and his wife Anna Gloxin (July 25, 1635-1709), daughter of Lübeck mayor David Gloxin († February 26, 1671), on the extensive property of his grandfather born around his Palais Brömserhof . Today the lodge house stands at the presumed location . His godparents included Sibylle Hedwig von Sachsen-Lauenburg , after whose father Duke August he was named August , and the Lübeck mayor Hermann von Dorne , who gave him his middle name. He had eight siblings. In 1666 his father became court and judiciary of Duke Ernst the Pious , and the family moved to Gotha . His father died there on April 30, 1670. August Hermann was trained by a private teacher, attended the Illustre high school for one year in 1676/77 and was then privately prepared for a university course for two more years.

At Easter 1679 he began basic philosophical studies with Conrad Rudolph Hertz at the University of Erfurt , made himself familiar with the Greek language and laid the foundations for a theological study. His uncle Anton Heinrich Gloxin provided him with the generous Schabbel scholarship , which enabled him to study at the University of Kiel with Christian Kortholt the Elder in autumn 1679 . Ä. could continue. In 1682 he stayed for two months in Hamburg with Esdras Edzardus and returned to Gotha. In Gotha he did self-study for a year and a half, studied at the University of Leipzig from Easter 1684 and became a student of Adam Rechenberg , Johannes Olearius and Johannes Cyprian .

After a short stay in 1685 at the University of Wittenberg , he obtained the academic degree of a master's degree in philosophy in Leipzig with a disputation on Hebrew grammar , completed his habilitation at the Leipzig University and gave his first sermons at the Paulinerkirche in Leipzig . In 1686 he and Paul Anton founded the Collegium Philobiblicum, an association of masters for regular practice in exegesis of both the Old and the New Testament, which was then largely neglected at universities . There he got to know Philipp Jacob Spener , who had a significant influence on him.

In 1701 he was accepted as a foreign member of the Royal Prussian Society of Sciences .

In 1687 he experienced his conversion associated with a crisis of faith and a new beginning . After causing a stir as a pioneer of Pietism first in Leipzig, then in Erfurt - each time accompanied by unrest and expulsions - he became professor of Greek and Oriental languages at the theological faculty of the University of Halle, and later (1698) of theology. Here, too, his appearance caused violent disputes with Lutheran orthodoxy . From 1692 to 1715 Francke was pastor of the St. Georgen Church in Halle's suburb of Glaucha . Contacts with important personalities ( Carl Hildebrand von Canstein , the military, up to the Prussian ruling house) finally enabled him to be appointed to the city in 1715, where he was pastor of the St. Ulrich Church from 1715 to 1727 . Contemporaries praised Francke's oratory. The well-gifted and witty Mr. Francke zu Halle has drawn people's hearts to himself with his gracious clarity in teaching and preaching. 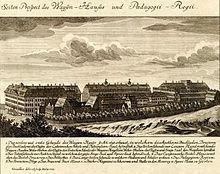 The establishment of the Francke Foundations in Halle represents his real life's work. In 1695 Francke began teaching and caring for children in his community in Glaucha. On September 18, 1698 the foundation stone for a new orphanage was laid and within 30 years school and residential buildings, workshops, gardens and a pharmacy were built. In a total of 50 years of building activity, a school town grew up in which up to 2,500 people lived and worked on the concept of a Christian-inspired social reform. In 1708 Francke also planned a necessary new hospital building. In his instructions on the rules for nursing or sick mothers , Francke set out his ideas about the tasks of nursing staff, which became trend-setting in the early 18th century. For Francke, the parable of Jesus' washing of the feet from the Gospel of John (John 13) was an exemplary and paradigmatic basis for the work of sick and nursing deaconesses.

In February and March 1718 Francke was in the residential town of Ansbach , where he preached, had discussions at court and, among other things, met with the Oberhofmeisterin von Neuhaus, the donor of a widow's house, as well as the maid of honor von Kniestädt and the Silesian evangelical exile Anna Magdalena von Reibnitz , born von Pusch (* 1664; † after 1742), met.

Francke, from whose schools many school teaching positions and parish offices were filled with his students and who was therefore also called "Pastor of Germany", was initially dependent on direct donations for his company, but was able to do so through writing, the institution's own operations, fiscal privileges, etc. Increase Income. In his Halle company, Francke saw the beginning of a worldwide “General Reformation”, which he sought to promote in particular through the Danish-Halle Mission and the Canstein Bible Institute . At the portal of the main building of his foundations, he had Isa 40,31  LUT chiseled: "Those who wait in the Lord get new strength, so that they rise with wings like eagles". Above it is a picture of two eagles soaring towards the sun, which became the symbol of the Francke Foundations. 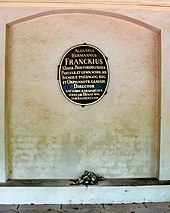 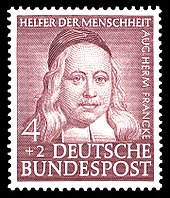 August Hermann Francke died on June 8, 1727 at the age of 64 in Halle. His grave and that of his family are on the Stadtgottesacker in Halle .

The Francke pupil Johann Julius Hecker founded the first practice-oriented secondary school in Berlin in 1747 , was the founder of the first Prussian teachers' college in 1748 and prepared the General School Regulations of August 12, 1763. The regulations formed the basis for the development of the Prussian elementary school system .

The Augustus Lutheran Church in Trappe , Pennsylvania , inaugurated in 1746, was named after August Hermann Francke .

August Hermann Niemeyer is named to this day as the second founder of the Francke Foundations .

The publishing house of the Francke bookstore in Marburg names August Hermann Francke as its namesake.

Many Protestant schools in central and northern Germany bear his name: the Christliche Schulverein Lippe e. V. has named its eight schools of different school types in Detmold , Lage and Lemgo after him, as well as the six schools and three daycare centers of the Hamburg sponsor "Free Christian Confession School Hamburg eV", the Christian school associations in Gießen and Buchholz / Nordheide and the Protestant primary school in Leipzig.

The city of Gotha named Franckestrasse in the east of the city after the pedagogue.

August Hermann Francke was not only a user of the "library of the orphanage", which makes up the main part of today's library of the Francke Foundations, but also owned an extensive private library , about which details have only been known since 2001. A large part of it went as heir to Francke's son Gotthilf August Francke and was auctioned off together with his private library in Halle an der Saale in 1770.

Francke married on June 4, 1694 in Rammelburg Anna Magdalena von Wurmb (1670–1734), the daughter of the heir to Hopperode Otto Heinrich von Wurmb (1631–1676) and his wife Sidonia, geb. von Bila († 1693). Her brothers resisted the connection because Francke did not correspond to her sister's status. Anna Magdalena supported and defended her husband in his religious work. She cared for him self-sacrificingly in his last years of illness. The 33-year marriage resulted in a daughter and two sons:

June 8 in the Evangelical Name Calendar .