The Gymnasium Ernestinum Gotha is a humanistic and natural science oriented high school in Gotha , which emerged in 1859 from the merger of the Gymnasium illustrious and the Ducal Realgymnasium . Until 1949 it was considered the oldest grammar school in the German-speaking area, before it was replaced as such by the Melanchthon grammar school founded in Nuremberg in 1526 due to its temporary closure from 1947 to 1991 .

Development of the high school

From the beginning to the middle of the 17th century

The oldest forerunner is the Latin school mentioned in 1291 at the parish church of St. Marien. The grammar school was founded on December 21, 1524 by Martin Luther's friend , the reformer Friedrich Myconius , in the cloister of the Augustinian monastery. Due to the influence of the Reformation, the content and form of teaching were realigned as early as the middle of the 16th century under the direction of Cyriacus Lindemann (1562–1568). He attached great importance to the mastery of grammatical rules and the interpretation of Latin authors. He introduced the new subject of declamation. He attached great importance to careful written work by the students. In addition to these aspects of learning, he made a name for himself through his humane treatment of students, as he always tried to establish a relationship of trust with his students. This distinguished him from his predecessor Pankratius Sussenbach (1540–1562).

Around 1600 the grammar school received the addition "illustrious" (excellent, brilliant, famous) by Duke Johann Casimir von Sachsen-Coburg. During this period, Andreas Wilke (1592–1631) was the rector's office. He was not insignificantly involved in the further development of the school. Wilke ensured more teachers at the school, increased the number of classes and expanded the school building by campaigning for its renovation. At the same time, he maintained connections to well-known professors and scientists throughout Germany. 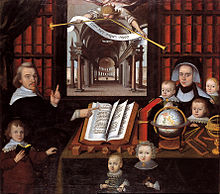 The 12th Rector Andreas Reyher with his family, portrait of August Erich (1643) 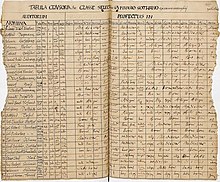 List of certificates from Selecta 1677; in the bottom line the ratings for August Hermann Francke

In the 17th century the grammar school was further sponsored by Duke Ernst I of Saxe-Gotha-Altenburg. He offered asylum to the sons of persecuted Lutherans from Hungary, Silesia, Poland, Russia and Scandinavia who were studying at the local grammar school. With the appointment of Andreas Reyher (1641–1673) as rector, compulsory schooling for all five to twelve year olds was introduced in the Duchy of Gotha. He reformed the Gotha school system in line with Wolfgang Ratke. Reyher began his rectorate with the draft of new school regulations under the title "Special and special driver report, how (...) boys and girls (...) can and should be taught" (1642). Reyher implemented a substantive reform of the school system that was to become famous beyond the country's borders. The introduction of the Selecta resulted in an increase in classes and an increase in the number of subjects. For the first time, lessons were given in the mother tongue. Mathematics, poetics and history were introduced as new subjects. In preparation for the studies, the subjects of rhetoric, logic, ethics, mathematics, metaphysics and spheres were taught in the Selecta final class.

The 18th century in the Duchy of Saxony-Gotha-Altenburg was shaped by the Enlightenment. The grammar school received special funding under the rule of Duke Ernst II of Saxe-Gotha-Altenburg, who was committed to the development of good schools. He was guided by the principle that educated subjects in all areas were an important prerequisite for the economic and political stability of the country. During his reign, Johann Gottfried Geißler (1768–1779) served as rector at the illustrious grammar school. Under him, the concept was developed which reduced the proportion of ancient languages ​​in favor of the natural sciences, German, literature, English and French. In order to give the students more freedom for domestic and independent work, the number of hours was limited to 4 in the morning and 3 in the afternoon. He introduced the subject teacher principle and ensured fixed, binding curricula. The starting point for these changes was Geissler's book “Unprecedented thoughts on how the establishment of the gymnasii illustris Gothani could be improved to some extent” of November 1, 1768. Under Friedrich Andreas Stroth (1779–1785) and Friedrich Wilhelm Döring (1786–1833) these developments were continuous continued. The teachers among them, Johann Georg August Galletti , Johann Friedrich Salomon Kaltwasser (1752–1813), Adolf Heinrich Friedrich von Schlichtegroll , Johann Kaspar Friedrich Manso and Friedrich Jacobs , were characterized by a high degree of competence and a sense of duty. Their names went down in history as scholars and writers.

Foundation and development of the Ernestinum grammar school by 1945

Image of the Ernestinum Gymnasium in the 19th century.

In the years 1837/38 a modern school building in the classical style was built for the grammar school in the Bergallee, which corresponded to the requirements of the time. After a brief interregnum between 1833 and 1841 under the court preacher Eduard Adolf Jacobi (1796–1866) and Gottfried Seebode (1792–1868), Valentin Rost (1841–1859) ensured the high school regained its strength. He had to face the challenge of a competitor founded by the Gotha bourgeoisie, the Ducal Realgymnasium. This Realgymnasium , founded in 1836, oriented itself to the needs of the time on a scientific and mathematical teaching program. Chemistry, physics and mineralogy were taught as separate subjects. The modern foreign languages ​​French and English became more important than Latin.

On April 12, 1859, the Illustrious Gymnasium and the Ducal Realgymnasium were merged. On the occasion of this, the educational institution was named Gymnasium Ernestinum Gothae - in honor of Duke Ernst I of Saxe-Coburg and Gotha.

The new rector Joachim Marquardt (1859–1882) ensured strict adherence to the new school regulations without applying any particular harshness. He took an equally strict, but at the same time friendly, attitude towards his fellow teachers. He worked to improve the school plan. Under his direction, the school was expanded, an auditorium set up, and new library rooms and a gymnasium created. Teaching was based on a uniform canon of subjects. From the lower secondary school, there was a subdivision into humanistic and secondary school classes. Marquardt's successor was Albert von Bamberg (1883–1910), who also promoted the real sciences in addition to humanistic education. Under the new rector Ludwig Mackensen (1910–1914), girls were to visit the Ernestinum for the first time. Heinrich Anz (1914–1935) had to deal with the effects of the First World War when he took office . In the following years of the Weimar Republic , too, it is thanks to Anz that the humanistic grammar school was able to continue to exist. During the Nazi regime, the intervention of the Hitler Youth , the leave of absence of teachers, state celebrations, and the drafting of students for military service had a negative effect on school operations. Otto Küttler (1938–1945), as rector, endeavored to keep the school going. Theatrical performances, lectures and sporting events were organized under him. During World War II that was high school library at Friedenstein Castle transferred. Today it is part of the Gotha Research Library .

The grammar school in the post-war period

View of the school building

With the introduction of a new educational concept in the Soviet zone of occupation , the foundations of the continued existence of a humanistic grammar school were removed. The last Abitur exams at the Ernestinum were held in the 1945/46 school year. In the spring of 1947, the Ernestinum grammar school ceased to exist both formally and in name. The existing high school classes were integrated into the Arnoldischule on April 10, 1947, in order to continue their Abitur there. From then on, a ten-year middle school was housed in the school building of the former Ernestinum, from which a polytechnic high school emerged in 1959 , which was named POS Albert Schweitzer in 1965 .

The high school from 1991 to the present

After German reunification, the Ernestinum Gymnasium was re-established on November 1, 1991, and in 1993 the first Abitur exams were taken after 48 years. Since then it has been led by Lutz Wagner. Today 438 pupils study at this facility. You will be taught by 49 teachers. [As of September 2009]

Cooperation with other institutions