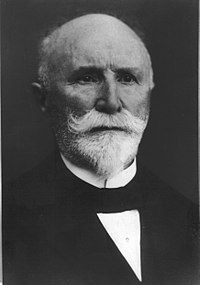 Ernst Emil Ferdinand Anding was born on August 11, 1860 in Seebergen as the first child of the farmer and carpenter Christoph Wilhelm Anding and his wife Martha Sibylle, née. Tenner born.

Anding attended the Ernestinum grammar school in Gotha , where he graduated from high school. He studied in Jena (1881-1883) and Munich (1885-1886) astronomy and received his doctorate in 1888 with Hugo von Seeliger Dr. phil. Then Anding stayed as a private lecturer in Munich, where he worked from 1896 as an observer for the Royal Bavarian Commission for international grade measurement. During his studies in 1881 he became a member of the student union and later gymnastics club Salia Jena .

In 1906 he was appointed to the new Gotha observatory at Jägerstrasse 7, which he managed until it was closed in 1934. Appointed professor, he first published the results of his measurements in Munich. As a theoretical and practical astronomer, he published theoretical considerations on an inertial system and the movements of the sun in space, as well as observational results on the eclipses of Jupiter's moons, among others. His last writing dealt with the possibility of a massive Sirius companion.

The Gotha observatory was further modernized under Anding's management. He improved the meridian circle by adding electrical contacts. The last optical instrument he acquired was a passenger instrument from the Bamberg company in Berlin . Clemens Riefler gave the observatory a modern clock system from Munich , which could be used to control the observatory clocks electrically and, via its own telegraph connection, the central clock in Gotha Town Hall and thus all city clocks.

Anding complained about the ducal foundation's declining interest in the observatory, which thus violated the will of Duke Ernst II . In 1934 the Gotha observatory was closed.

On June 30, 1945, the last head of the Gotha observatory died. His tomb is in the main cemetery in Gotha (Fam.-Pl. 224). In his honor, a street in his place of birth Seebergen was named "Prof.-Anding-Straße".