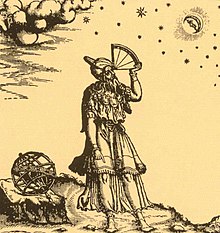 Historical illustration of an astronomer at work

Galileo Galilei , one of the fathers of modern astronomy (here almost blinded by frequent solar observation). Portrait of J.Sustermans 1636

An astronomer (from Greek ἄστρον ástron ' star , star ' and νόμος nómos 'law') is a (mostly academically educated) person who deals scientifically with astronomy .

If one restricts the term astronomer to those scientists who devote themselves full-time to astronomy, then two of the following activities are usually the subject of the profession:

The profession of professional astronomers is usually a university study of astronomy or related sciences advance, such as a diploma of Physics and Astronomy (only in Austria ), sometimes Degrees of Mathematics , Geodesy , aeronautics and others. In most cases, this is followed by writing a dissertation , as the completed doctorate is often a prerequisite for employment.

The job description of the astronomer has changed dramatically in the last few decades. In the past, astronomers mostly observed the sky using optical telescopes at observatories . Today most astronomers work on very specialized issues and mostly on the computer. They use electromagnetic signals from all wavelength ranges, from short-wave gamma radiation to the longest radio waves . Much of the measurement data is also disseminated via the Internet - especially during regular international measurement campaigns such as the IVS - or taken from the network.

As a result, astronomers now hardly work on the telescope themselves, but only for a comparatively short part of their working time in the control rooms of the observatories. The data obtained there are mostly evaluated and processed outside of the night shift. The so-called “service mode observing” is becoming more and more important: only the target and type of observation are specified, while the observations are carried out independently or automatically on the telescopes or by earth satellites .

Since many students of the subject later work in other areas, it depends on how they see themselves whether they continue to call themselves astronomers. To what extent scientifically active amateur astronomers should be called astronomers in the real sense is also open. In earlier centuries in particular, a separation between specialist astronomer and amateur is not very useful, as the example of Wilhelm Olbers shows.

Since astronomy is still a science that is also shaped by individual and small research groups in the professional field, amateurs with the appropriate talent and equipment also have the opportunity to participate. Amateurs are often successful where continuous observation is necessary but is hardly feasible professionally because of the costs of large telescopes, for example monitoring asteroids and comets, or in the field of variable stars and astrometry .

Since astronomers naturally - even if they are no longer as pronounced as in the past due to modern observation and information technology - carry out their work at night , the work of a professional astronomer requires clear regulations on working hours .

The times of the “astronomical lack of sleep ”, about which famous astronomers sometimes complained in their letters or reports, are largely over. Modern observatories are usually equipped with technologies that allow a certain degree of remote control or even offer them internationally, such as B. some observatories in Hawaii or ESO observatories like in Chile . Since visual measurements or controls are seldom required and electro-optical sensors generally also allow function control via EDP or the Internet , continuous nighttime working hours are becoming increasingly rare.