The Astrophysics deals with the physical fundamentals of research into celestial phenomena and is a branch of astronomy . As an extension of classical astronomy (mainly consisting of astrometry and celestial mechanics ) it makes up large areas of astronomical research today .

Many historians date the beginning of the amalgamation of astronomy and physics to the beginning of the 17th century, more precisely to the discovery of Kepler's laws . One of the first to believe that Johannes Kepler was the first astrophysicist was his long-time teacher and friend Michael Mästlin . In a letter to Kepler he wrote: “I think one should ignore physical causes and should try to explain astronomical questions only according to the astronomical method with the help of astronomical, not physical, causes and hypotheses. That means that the calculations require an astronomical basis in the area of ​​geometry and arithmetic. "

Both Kepler and Galileo Galilei studied the work of William Gilbert , a doctor and physicist in 17th century England. Gilbert was the first to clearly differentiate between magnetism and static electricity . He investigated the electrical charge on many substances and was convinced that the earth as a whole must be viewed as a single magnet with two poles. In his mind, magnetism was the “soul” of the earth - from which he developed a whole “magnetic philosophy”. However, many scientists of the time did not take the discoveries of Kepler, Galileo and Gilbert seriously. This led to their work being neglected, and ultimately two more centuries to pass before alchemical beliefs were abandoned.

The actual hour of birth of astrophysics is indicated by many natural scientists today with the confirmation of the Copernican view of the world by Friedrich Wilhelm Bessel and Thomas James Henderson as well as Friedrich Georg Wilhelm Struve in 1838 by means of the first measurements of trigonometric star parallaxes . The stellar photometry , so measuring the apparent brightness of the stars, and developed almost parallel to spectrum analysis by Joseph von Fraunhofer , Gustav Kirchhoff and Robert Bunsen also formed part of the basis of that science, which is known as astrophysics today. As early as 1814, Fraunhofer discovered dark lines in the spectrum of the sun , the Fraunhofer lines , without being able to explain their origin.

“The actual astrophysics , i. H. The exploration of the stars with physical methods began when G. Kirchhoff and G. Bunsen discovered spectrum analysis and the interpretation of Fraunhofer lines in the solar spectrum in Heidelberg in 1859. "

- A. Unsöld, B. Baschek : The new cosmos: Introduction to astronomy and astrophysics, 7th edition

“As early as 1860 G. Kirchhoff formulated the basics of radiation theory, in particular Kirchhoff's theorem , which defines the relationships between emission and absorption of radiation in thermodynamic equilibrium . This sentence, together with Doppler's principle , formed the whole conceptual framework of astrophysics for forty years. "

- A. Unsöld, B. Baschek : The new cosmos: Introduction to astronomy and astrophysics, 7th edition

The findings of Kirchhoff and Bunsen ultimately led to an immediate application of the newly acquired technologies by astronomers in the middle of the 19th century. As early as 1863, Angelo Secchi published studies based on the findings of Kirchhoff and Bunsen. Two today very well-known astronomers also took on their studies and published groundbreaking works on the subject of astrophysics during this period: Lewis Morris Rutherfurd from New York and William Huggins from London. During a solar eclipse in India on August 18, 1868 discovered Pierre Janssen in the corona of the sun by means of chemical observation by spectral analysis, a (then) not yet known element: helium .

In the course of the next few years, many well-known scientists dealt with essential basic physical research and thus performed interdisciplinary basic research for today's astrophysics. In his book On the Conservation of Force (1847), Hermann von Helmholtz formulated the law of conservation of energy in more detail than Julius Robert von Mayer had done in 1842 and thus contributed significantly to the recognition of this initially very controversial principle. With this, Helmholtz provided the principles for gravitational energy . Antoine Henri Becquerel , the discoverer of radioactivity, laid the foundation for the measurement of isotope decay in 1896. George Howard Darwin , son of Charles Darwin , studied the effect of the tides on the solar system with mathematical methods from 1882 and became a recognized expert in this field. In 1899 John Joly proposed a method to determine the age of the earth from the sodium content of the oceans, based on the idea that its concentration would steadily increase through erosion on land. He then estimated the age of the earth to be 80 to 100 million years. In 1903 he proposed a better method, estimating the age of the earth from the radioactive decay of radium (in a Nature article). In 1907, Bertram Boltwood measured the age of rocks through the radioactive decay of uranium to lead ( uranium-lead dating ).

Theoretical astrophysics tries to predict or simulate celestial phenomena using models. Many astrophysical processes can be described by partial differential equations for which an exact analytical solution can only be found in exceptional situations. A widespread method in astrophysics is therefore numerical calculations ( numerics ) and simulations that would take days to weeks with a standard PC (2008). In practice, therefore, supercomputers or clusters are often used . The results obtained in this way are compared with observations and checked whether they agree. 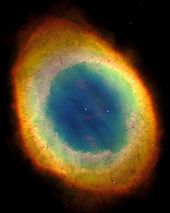 The most important method is the spectral analysis of the electromagnetic radiation , whereby the observation range extends from long-wave radio waves ( radio astronomy ) to short-wave and thus high-energy gamma rays over about 20 powers of ten. From the earth , in addition to visible light, the frequency ranges of radio waves and some parts of the infrared range can be observed. Most of the infrared light, ultraviolet light, as well as X-rays and gamma rays can only be observed from satellites, since the earth's atmosphere acts as a filter.

If stars are classified according to spectral classes and luminosity classes , they can be entered in a Hertzsprung-Russell diagram (HRD). The location in the HRD determines almost all of the star's physical properties.

The color-brightness diagram (FHD) can be used to determine the distance .

In addition to individual stars, mainly galaxies and galaxy clusters are observed. For this purpose, earth-based telescopes - often also connected to form clusters - such as B. HEGRA , as well as space telescopes such as the Hubble space telescope are used. Frequently satellites with detectors and telescopes are also launched. Astrophysicists are also interested in the cosmic radiation background.

For a long time astrophysics knew next to no laboratory experiments . However, the development of new, powerful telescopes from the turn of the millennium ultimately led to the emergence of the branch of laboratory astrophysics. This creates and studies previously unknown molecules. On the basis of the spectrograms obtained in the laboratory and with the help of large radio telescopes, these molecules can then be detected in interstellar gas clouds. This in turn allows conclusions to be drawn about chemical processes that take place there, for example during star birth. There are only around 20 laboratory astrophysics research groups worldwide, in Germany at the University of Kassel , the Friedrich Schiller University Jena and the University of Cologne . There are also laboratories that deal with the formation of planets, such as the University of Braunschweig and the University of Duisburg-Essen . In addition to simulations on computers for the collision and growth of dust particles, some laboratory experiments are also carried out here, which are then continued in weightlessness , among other things .

Relationship to other branches of physics

Astrophysics is in principle dependent on observations and measurements, because constructed experiments are excluded due to the size of the research objects and the non-reproducibility of unique cosmological events (Big Bang). Many of these measurements have a large relative error due to their small size (e.g. object sizes or angular distances). Quantities determined indirectly from this (e.g. stellar masses, ages or distances) are accordingly associated with high inaccuracies. For other measurements, such as B. Spectroscopy of the star atmosphere or radar measurements to the moon or in the flyby of objects, or by statistical methods (many independent measurements) can also be achieved with high accuracy . Despite this fundamental difference to all other physical sub-disciplines, astrophysicists use methods and laws from other areas of physics, in particular from nuclear and particle physics (such as detectors for measuring certain particles at certain energies) or are beginning to develop nuclear astrophysics . In theoretical astrophysics, on the other hand, the analogy to plasma physics is particularly close, since many astronomical phenomena such as star atmospheres or clouds of matter can be described as plasmas in good approximation.