Helmholtz is a redirect to this article. For further meanings, see Helmholtz (disambiguation) . 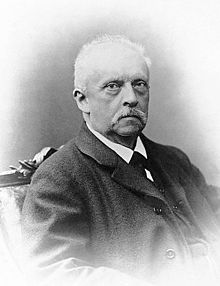 Hermann Ludwig Ferdinand Helmholtz , from 1883 by Helmholtz , (born August 31, 1821 in Potsdam , † September 8, 1894 in Charlottenburg near Berlin ) was a German physiologist and physicist . As a universal scholar , he made important contributions to optics , acoustics , electrodynamics , thermodynamics and hydrodynamics . He was one of the most influential naturalists of his time and was alluding toOtto von Bismarck also referred to as the " Reich Chancellor of Physics ". 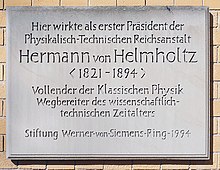 Memorial plaque on the former Physikalisch-Technische Reichsanstalt, in Berlin-Charlottenburg
Interview of the Helmholtz biographer David Cahan in the resonator - Podcast

Hermann Helmholtz was the son of August Ferdinand Julius Helmholtz and Caroline Penne (1797-1854). Throughout his life he had a close relationship with his younger brother Otto , who became an engineer.

He attended the " Große Stadtschule " grammar school in Potsdam, where his father worked as director and from whom he had already been taught philosophy , old and new languages.

Studies and activities in Berlin and Potsdam

Even seventeen-year-old Helmholtz was very interested in physics. The natural sciences , especially physics, were, however, regarded as subjects of the artless arts. Therefore, from 1838 Helmholtz studied medicine at the medical-surgical Friedrich Wilhelm Institute in Berlin, where he was a student of the physiologist Johannes Müller , among other things . Helmholtz was in 1842 with a thesis in microscopic anatomy doctorate . He was an above-average graduate, but initially there was little evidence of an academic career. He initially worked for a year as a junior physician at the Charité .

From 1843, Helmholtz served in Potsdam , since studying at the institute he had chosen included the obligation to do eight years of military service. In 1846 he became a military doctor in the royal regiment. In 1848 he was prematurely discharged from military service on the recommendation of Alexander von Humboldt and taught anatomy at the Berlin Art Academy.

Professorships for physiology in Berlin, Königsberg, Bonn and Heidelberg

In 1848 Helmholtz accepted a professorship for physiology in Berlin, succeeding Ernst Wilhelm von Brücke . He was focused on his work and cared less about the political processes ( 1848 Revolution ) - unlike his colleague Emil Heinrich Du Bois-Reymond, for example . On August 26, 1849, he married Olga von Velten (1827-1859).

In 1849 he was appointed professor of physiology and pathology in Königsberg . However, his wife, suffering from tuberculosis, could not stand the harsh climate in East Prussia . With the mediation of Alexander von Humboldt, Helmholtz moved to Bonn in 1855 to accept the vacant chair for physiology. There he lived in the Villa Vinea Domini . In 1858 Helmholtz accepted a well-paid professorship in Heidelberg, where he was the first holder of a physiology chair at the University of Heidelberg until 1870. Wilhelm Wundt was his assistant there from 1858 to 1863 . In 1858 Hermann von Helmholtz was elected a corresponding member and in 1870 a foreign member of the Bavarian Academy of Sciences .

In December 1859 his wife Olga died, leaving him with two young children. On May 16, 1861, Helmholtz married his second wife, Anna von Mohl (1834–1899). Both marriages resulted in a total of five children (three sons and two daughters). A son from his first marriage was the railway designer Richard von Helmholtz (1852–1934). A daughter from the second marriage was Ellen von Siemens-Helmholtz (1864-1941), the wife of the industrialist Arnold von Siemens (her father-in-law was Werner von Siemens ).

Professorship for physics in Berlin

In 1870, the professor of physics at the Friedrich-Wilhelms-Universität Berlin , Heinrich Gustav Magnus, died . Helmholtz was offered this professorship. Since he had dealt more with physics than physiology in recent years, he accepted the offer. Even then, Helmholtz was considered one of the greatest, most versatile thinkers and researchers in Germany. With great effort, he was adopted by the educated population of Heidelberg.

In 1877/1878 he was the rector of the university. From 1879 to 1883 the young Heinrich Hertz worked for Helmholtz in Berlin. In 1883 Helmholtz was raised to the nobility. From 1882 he was, alongside Wilhelm Foerster and Werner von Siemens , one of the initiators for the later establishment of the Physikalisch-Technische Reichsanstalt . The many innovations in electrical engineering, the measurement of electricity quantities, required uniform standardization. In 1888 Hermann von Helmholtz became the first president of the Physikalisch-Technische Reichsanstalt in Charlottenburg.

Many strokes of fate darkened the life of Helmholtz in the last phase: the death of his son Robert (1889) and the death of his friend Werner von Siemens (1892). In 1894 his student Heinrich Hertz and his colleague August Kundt died .

On September 8, 1894, Helmholtz died of a second stroke. He found his final resting place in Dept. AT-52 at the Wannsee cemetery, Lindenstrasse . The design of the tomb was made by the sculptor Adolf von Hildebrand . His grave has been dedicated to the city of Berlin as an honor grave since 1967 .

Helmholtz was married twice. In 1849, Hermann von Helmholtz and the doctor's daughter Olga von Velten (1827-1859) married in Berlin-Dahlem . The couple had two children:

Helmholtz was an extraordinarily versatile scientist who was also interested in the interrelationships between physics, physiology, psychology and aesthetics. The following structure is therefore only to be understood as a guide.

For example, at the beginning of his scientific work, Helmholtz came through physiological studies of fermentation , putrefaction and the heat production of living beings (which he attributed mainly to muscle work) to the formulation of the law of conservation of energy , i.e. an elementary law of physics. In Heidelberg, from 1858, Helmholtz dealt with the medical fundamentals of optical and acoustic physiology - and at the same time with questions of theoretical physics ( hydrodynamics and electrodynamics ) and with mathematical questions (geometry).

As early as 1842, Helmholtz demonstrated the origin of nerve fibers from ganglion cells in his doctoral thesis . In 1846, during his time as a military doctor, Helmholtz set up a laboratory in Potsdam and wrote an experimental work on metabolic consumption during muscle actions .

From 1849 Helmholtz, as professor of physiology and pathology in Königsberg, devoted himself intensively to the sensory organs of the eye and ear. Here he developed the ophthalmoscope for viewing the fundus of the eye from cemented together "glasses and cover glasses for microscopic purposes " . Helmholtz also developed an apparatus for measuring the nerve conduction velocity in frogs, the myograph .

“I have found that a measurable time elapses while the stimulus that a momentary electrical current exerts on a frog's hip plexus propagates to the point where the thigh nerve enters the calf muscle. For large frogs whose nerves were 50 to 60 millimeters long, and which I had kept at 2 to 6 degrees Celsius, while the temperature of the observation room was between 11 and 15 degrees, this period was 0.0014 to 0.0020 of a second. "

Helmholtz helped Thomas Young 's additive theory of color vision to breakthrough in 1852 , showing that three basic colors are sufficient to produce all others. He suggested that there must therefore be three types of photoreceptor cells in the eye ( three-color theory ). In 1851 he invented the ophthalmometer for determining the radii of curvature of the cornea and in 1857 the telestereoscope .

He developed a mathematical theory to explain timbre through overtones , the resonance theory of hearing and based on it, the theory of tone sensations as the physiological basis for the theory of music (1863).

In epistemological discussions, Helmholtz dealt with problems of counting and measuring as well as the general validity of the principle of the smallest effect . On the basis of his optical and acoustic investigations, he modified the classical concept of perception , rejected the existence of fixed forms of perception , in contrast to Kant , and therefore considered it possible to make non-Euclidean geometries clear. The four-phase model of the creative process is based on observations made by Helmholtz.

In the last volume of his work Handbuch der Physiologische Optik , published 1856–1867 , he presented the role that the unconscious conclusion plays in perception.

In his treatise On the Conservation of Force (1847) he formulated the law of conservation of energy in more detail than Julius Robert von Mayer had done in 1842, and thus contributed significantly to the recognition of this initially very controversial principle. He fended off allegations of plagiarism by many of his contemporaries by saying that he was unfamiliar with Mayer's work, which had appeared five years earlier. By applying the law of conservation of energy to living beings, Helmholtz contradicted the vitalists , who assumed a vital force as the basic force of life.

With the compilation of the vortex theorems (1858 and 1868) on the behavior and movement of vortices in frictionless fluids , Helmholtz provided important principles of hydrodynamics . In investigations into electrodynamics , Helmholtz sought a compromise between the theories of Franz Ernst Neumann and James Clerk Maxwell . Mathematically elaborated studies of natural phenomena such as cyclones , thunderstorms or glaciers made Helmholtz the founder of scientific meteorology .

The three essays on the “Thermodynamics of Chemical Processes” (1882/1883) are among the most outstanding later achievements of Helmholtz. Here Helmholtz applied the main principles of thermodynamics to electrochemistry . He introduced the concept of free energy , which can be used to predict whether a chemical reaction according to the laws of thermodynamics ( Gibbs-Helmholtz equation ) is possible. 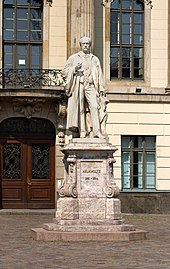 The Helmholtz coil is a frequently used, simple geometry for generating an almost homogeneous magnetic field that is accessible from all sides . The arrangement consists of two coaxially at a distance equal to that of their radius opposite ring coils with the same number of turns.

An acoustic resonator used for sound analysis (a vibratory system that begins to vibrate when excited at the natural frequency ) consists of an air-filled hollow sphere with an opening. The Helmholtz resonator is used in many ways today, e.g. B. in resonance charging in car engines to increase performance and reduce consumption.

The general partial differential equation is called the Helmholtz equation

designated. is the Laplace operator .

In electrodynamics, the Helmholtz equation results from the wave equation for the vector potential in Lorenz calibration in Fourier space :

Overlay principle according to Helmholtz

If there are only linear resistances and independent sources (current sources and / or voltage sources) in a network, the following relationship applies:

“The effect (current or voltage) at any point in the network, which is caused by all sources, is equal to the sum of the effects of each individual source, if at the same time the remaining sources are replaced by their ideal internal resistances. Ideal voltage sources are therefore to be short-circuited, ideal current sources are to be replaced by an open circuit. "

The Helmholtz superposition principle only applies to currents and voltages, not to power.

The following are named after Hermann von Helmholtz:

In 1969 the proposal was made to name the physical unit for the electrical double-layer moment Helmholtz .

In 1939, the Nazi Association of German Technology, with the consent of Reich Post Minister Wilhelm Ohnesorge and Reich Minister of Transport Julius Dorpmüller, proposed to Adolf Hitler to use the term Helmholtz instead of Hertz for the unit of frequency , while retaining the abbreviation Hz . The background was the Jewish descent of Heinrich Hertz , whose teacher was Helmholtz. The proposal was not carried out.

The designation of musical tone symbols with commas in front of or apostrophes after the letters (e.g. a dashed  a or a ' for the concert pitch ) is also called the Helmholtz spelling.

The Adolf Würth Center for the History of Psychology in Würzburg showed between December 2012 and May 2015 an exhibition on Hermann von Helmholtz - a pioneer in psychology .