Bust of Adolf von Hildebrand in the Munich Hall of Fame , made in 1987 by the sculptor Ulla Scholl .

The Wittelsbacher Fountain in Munich is one of the main works by Adolf von Hildebrand. The picture shows the allegory of the beneficial power of water. 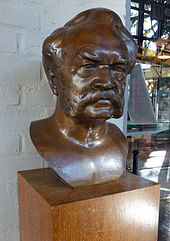 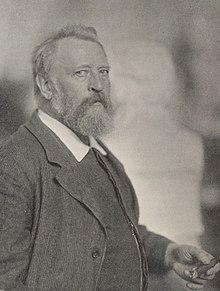 Adolf Hildebrand grew up in Bern , where his father Bruno Hildebrand taught economics . His mother was Clementine Guttentag, who came from a Jewish family. He studied at the royal. Nuremberg art school and from 1866 to 1867 in the studio of Kaspar von Zumbusch in Munich. Soon afterwards he traveled to Rome , where he met Hans von Marées and Konrad Fiedler .

Despite its success and its impact beyond the German-speaking area, Hildebrand was temporarily attacked at home because of his orientation towards the Italian Renaissance and his extended stays in Italy (Hildebrand bought a former monastery in 1874, today's Villa di San Francesco di Paola in Florence ). because his art was seen as "too little German". For a long time von Hildebrand had his main residence in Florence. It was not until 1898 that he moved into a villa he designed himself in the Bogenhausen district of Munich , which soon became the meeting place for Munich society - today known as the Hildebrandhaus . Von Hildebrand was married to Irene, née Koppel-Schäufelen, and they had six children. His most important student is his son-in-law Theodor Georgii , who rebuilt Hildebrand's Wittelsbach fountain in Munich , which was destroyed in World War II . Another son-in-law, Carl Sattler , was a German architect and university professor.

Hildebrand died in Munich at the age of 74. He is buried in the Oberföhringen cemetery.

Hildebrand's sculptures and sculptures have classical, “Mediterranean” features. They are characterized by a clear, reduced and calm design. Hildebrand advocated a clear and perfect design of the work of art without superfluous details. His preferred subject was the human figure , which generally appeared to him to be the most distinguished subject of art. He often tried to integrate a sculptural work into a larger whole, which ultimately led Hildebrand to more and more urban planning tasks. Hildebrand soon became a leader in Germany in the field of fountain and monument art.

Hildebrand's theoretical work The Problem of Form in Fine Art (1893) was influenced by the considerations of his friend and sponsor Konrad Fiedler. It has particularly influenced art history - and here in particular the art historian Heinrich Wölfflin . In his work, Hildebrand starts from the principle that "the work of art [...] must be eye-fair" (Wölfflin). For every work there is an ideal point of observation . For the sculpture, which is usually viewed from a distance , this means that it has to take into account the two-dimensionality of human perception : Reduction and renunciation of details thus become Hildebrand's working maxims - similar to Auguste Rodin , who is seven years older than him . The relief , which according to Hildebrand ideally corresponds to human intuition, becomes the normative measure of plastic in general.