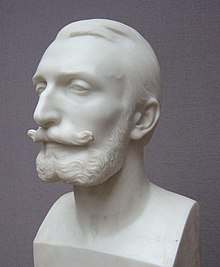 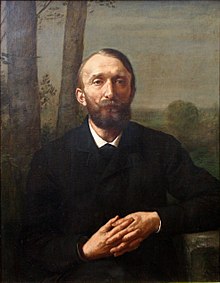 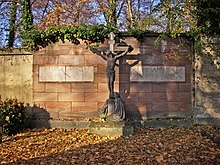 Konrad Fiedler's grave at the Südfriedhof in Leipzig

Konrad Fiedler (born September 23, 1841 in Oederan , Saxony , † June 13, 1895 in Munich ; occasionally also in the spelling Conrad Fiedler ) was one of the most important German art theorists of the 19th century .

Fiedler studied law from 1861 at the Université de Lausanne and the Ruprecht-Karls-Universität Heidelberg . In 1862 he became a member of the Corps Guestphalia Heidelberg . As an inactive he moved to the Friedrich-Wilhelms-Universität zu Berlin and the Universität Leipzig , which made him Dr. iur. PhD. After a short employment in a law firm, Fiedler gave up his profession as a lawyer. Instead, he dedicated himself to art and traveled through Europe and the Middle East as a patron , art collector and art critic . In Rome he met Hans von Marées and Adolf von Hildebrand , whose friend and sponsor he became. In 1876 Fiedler married Mary (later 'Levi') Meyer, the daughter of the art historian Julius Meyer . In 1880 the couple settled in Munich, where he a. a. lively exchanged ideas with the eminent composer Ethel Smyth on intellectual and artistic matters. In 1895 Konrad Fiedler died after falling from a window with a low parapet; Whether it was an accident (as stated at the time) or suicide has not been conclusively clarified. Fiedler was buried in the family grave at Gut Crostewitz . Since the village and manor of Crostewitz had to give way to lignite mining in 1967, his remains were moved to the south cemetery in Leipzig.

Fiedler is considered to be a “pioneering theorist” (Kultermann) for the view of art in the 20th century . In the circle of the German-Roman artists Anselm Feuerbach , Adolf von Hildebrand and Hans von Marées, he developed an art-philosophical concept of the autonomous work of art based on the philosophy of Kant and Schopenhauer . In the works of Hildebrand and Marées, Fiedler saw the possibility of a new artistic language that was solely committed to the laws of art and not, as was common in official history painting at the time , to non-artistic reality .

Fiedler exerted a great influence on artists of the early 20th century, among them Paul Klee and Wassily Kandinsky . Heinrich Wölfflin (also through Adolf von Hildebrand) was influenced by Fiedler among the art historians . In addition, the approaches of the patron of the arts and private scholars are important not only for aesthetics , but also for a philosophy of perception .

The most important works by Fiedler published during his lifetime include On the Assessment of Works of Fine Art (1876), On Art Interests and Their Promotion (1879), Modern Naturalism and Artistic Truth (1881), On the Origin of Artistic Activity (1887) and Hans by Marées (1889).

The title of Modern Naturalism and Artistic Truth (1881) might suggest that naturalism in art leads to truth . On the contrary, in Fiedler's art-philosophical concept, art is independent of all “external reality” - and thus also of the imitation of nature ( mimesis ) from which naturalism proceeds. Reality and therefore truth be realized in the artist, who in the art , the vision illustrated as such. Fiedler emphasizes the autonomy and self-importance of an art that is understood as "absolute". The work of art is to be created as something to be understood out of itself and a “pure visibility” - and not as one that refers to conceptual or spiritual content.

About the origin of artistic activity

Probably the most important work by Fiedler On the Origin of Artistic Activity (1887) explores the role of the work of art in the knowledge of the world in a completely new way by developing its own theory of perception based on Immanuel Kant and the findings of Impressionism . This is characterized by an accentuation of the 'perception-forming' subject , a monadic view of the perception process and the idealistic stylization of the work of art (far removed from the Kantian judgment of taste) as a possible place of 'pure' visibility.