After Altenburg and Schmölln, Meuselwitz is the third largest city in the Altenburger Land district in Thuringia and the third largest municipality in the district in terms of area. The small town lies in the border triangle with Saxony and Saxony-Anhalt on the southern edge of the Leipzig lowland bay between Altenburg in the southeast and Zeitz in the northwest and Gera in the southwest and Leipzig in the northeast.

Since the 17th century, the place was initially shaped by the work of the von Seckendorff family , but from 1860 on, Meuselwitz transformed into an industrial town of lignite . Various buildings worth seeing have been preserved from both times, the first includes the orangery and the park as well as the city church in baroque style and the latter the neo-Gothic town hall from 1874. Since that year Meuselwitz also has city rights.

Adjacent communities, clockwise, are the city of Lucka , Haselbach , Treben , Gerstenberg , the district town of Altenburg, Rositz and Kriebitzsch in the Altenburger Land district, as well as Regis-Breitingen in the Saxon district of Leipzig in the north and Elsteraue in the west and the city of Zeitz in the Saxony-Anhalt Burgenland district .

In addition to the core city with the historic district of Zipsendorf, Meuselwitz includes the following districts, starting from the north in a clockwise direction:

Meuselwitz and its main building around 1800 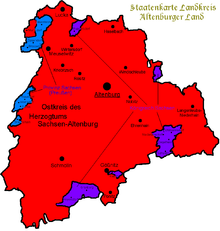 State division of the Altenburger Land until 1920

Bahnhofstrasse with the architecture typical of the city center

Today's Meuselwitz was first mentioned in 1139 as the manor "Mizleboze". At the beginning of the 15th century, the estate was owned by the Lords of Bünau and , from 1578, by the Cramer von Clausagh emigrant family .

In 1676 Gut Meuselwitz was acquired by Veit Ludwig von Seckendorff , who had Meuselwitz Castle rebuilt in 1677 . The aristocratic market town of Meuselwitz belonged to the Wettin office of Altenburg , which from the 16th century was under the sovereignty of the following Ernestine duchies due to several divisions in the course of its existence : Duchy of Saxony (1554 to 1572), Duchy of Saxony-Weimar (1572 to 1603), Duchy Saxe-Altenburg (1603 to 1672), Duchy of Saxe-Gotha-Altenburg (1672 to 1826). When the Ernestine Duchies were reorganized in 1826, Meuselwitz again became part of the Duchy of Saxony-Altenburg. At that time Meuselwitz was in the northwest of the duchy. The current districts of Zipsendorf , Brossen , Falkenhain and Rusendorf belonged to the Naumburg-Zeitz monastery until 1815 , which was under the sovereignty of the Electorate of Saxony. With the Congress of Vienna they were ceded to Prussia , making Mumsdorf in Saxony-Altenburg an exclave in Prussian territory. The current districts of Ruppersdorf and Bosengröba belonged to the Kingdom of Saxony at that time (until 1806 to the Electorate of Saxony ).

The town hall was built in 1861/1862, a public water supply followed in 1874. In that year, Meuselwitz was granted town charter by Duke Ernst I of Saxony-Altenburg . After the administrative reform in the Duchy of Saxony-Altenburg, Meuselwitz belonged to the Eastern District (until 1900) and to the Altenburg District Office (from 1900). From 1879 the city was under the jurisdiction of the Altenburg District Court until 1906, when the Meuselwitz District Court was established as a separate judicial district.

From 1918 Meuselwitz belonged to the Free State of Saxony-Altenburg , which was added to the State of Thuringia in 1920. In 1922 the city became part of the Altenburg district . This year, Schnauderhainichen was the first place that was incorporated into Meuselwitz.

The Jewish department store Fruchtmann was destroyed in the November pogrom in 1938. Numerous Jews were deported to the extermination camps, others emigrated to Palestine and other countries. During the Second World War there were the forced labor camps Meuselwitz I-III and V as well as the Gasthof Lindenhof, Heymer & Pilz and Karl Julius Görler, which housed a large number of prisoners of war and forced laborers who were housed in the “ Phönix ” pit in Mumsdorf and at the HASAG plant in Meuselwitz, which was subordinate to the Buchenwald concentration camp as an external command, had to do forced labor. Many lost their lives as a result of the catastrophic working and living conditions, and some were killed in a bomb attack. The surviving Jewish women were sent on a death march by the SS , the men were driven to Theresienstadt . At the Mumsdorf Cemetery of Honor, which was laid out under the supervision of the US Army , 290 dead who were found in mass graves are remembered.

Meuselwitz was hit twice by heavy air raids during World War II , on November 30, 1944 (US Air Force) and on February 20, 1945 (British Bomber Command). The first attack dropped 54 tons of bombs, the second 140 tons, including seven air mines and 550 five-quintals. More than 250 people died in these attacks, 42 of whom were forced laborers. 3000 Meuselwitzers were homeless after the second attack. Meuselwitz gave the impression of a " ghost town ". In both air strikes, 85 percent of the buildings in the entire city were completely destroyed or moderately to slightly damaged. It is often wrongly assumed that 85% of Meuselwitz was destroyed.

On April 17, 1945, American troops moved into Meuselwitz. At the beginning of July they were replaced by the Red Army . Thus Meuselwitz - like all of Thuringia - became part of the SBZ and in 1949 the GDR .

The castle was only damaged in the bombardment on February 20, 1945 , but after the war and as part of the land reform it was blown up and demolished . The orangery burned down, its dome collapsed in 1954 (for more see sights) The preserved baroque castle gate and the historic farm buildings (damaged in the air raid) were also removed.

In 1950, two teachers and two students from the Meuselwitz Oberschule were sentenced to death by a Soviet military tribunal in Weimar and executed in Moscow on charges of forming a "resistance group" . In 1952, an “anti-Soviet group” of former students was arrested again. Two of them (and one other man) were sentenced to death by a military tribunal in Potsdam and executed in Moscow. Several other former students received long-term labor camp sentences in a Soviet gulag . In 1995/96 the condemned were officially rehabilitated by the Russian Federation . A memorial stone in front of the Veit-Ludwig-von-Seckendorff-Gymnasium with the inscription: “In memory of the victims of the communist dictatorship and the resistance at our school” (the names of three of those killed follow) commemorates the event. There is also an exhibition designed by the students in the grammar school.

With the first administrative reform in the GDR in 1950 Meuselwitz was assigned to the Thuringian district of Altenburg. At the same time Bünauroda was incorporated. Mumsdorf, which was previously a Thuringian exclave, came to the Zeitz district in the state of Saxony-Anhalt .

Today's Meuselwitz was first mentioned in a document as a manor in 1139 as "Mizleboze". At the beginning of the 15th century, the estate was owned by the Lords of Bünau , and from 1578 by the Dutch emigrant family (Cramer) von Clausagh, who set up a fabric manufacture with a weaver's house, fulling mill and dye works here.

In 1676 the estate was acquired by Veit Ludwig von Seckendorff , who was then in the service of Duke Moritz von Sachsen-Zeitz . He had Meuselwitz Castle rebuilt in 1677 , settled in Meuselwitz from 1681 and worked in the then Duchy of Saxony-Gotha -Altenburg as landscape and chief tax director. Between 1724 and 1727 the palace was fundamentally redesigned under the imperial count Friedrich Heinrich von Seckendorff . The existing castle was converted into a four-wing complex by the Leipzig builder David Schatz , with central projections facing the city and the park. The castle had a bastion-like floor plan, the ballroom was characterized by rich painted and plastic decoration. The castle gate to the city was splendidly decorated with trophies. To the right and left of the gate there were two-storey commercial buildings in the style of that time. The rebuilt orangery in the palace garden, which was laid out in 1709 and which was built in 1724, is the only surviving structure in the palace complex after its partial destruction (burned out) by bombing in 1945 and the subsequent demolition of the only slightly damaged palace, the damaged farm buildings and the intact palace gate.

In 1740 the Martinskirche was rebuilt by a Hungarian architect in the style of his homeland.

Lignite was found near Meuselwitz as early as 1670 . A first attempt to mine lignite underground was made around 1780. After 1860, several large coal deposits north of the city were developed, which were initially exploited underground as piers , but were later opened up on a large scale as opencast mines . One consequence of this was that the population more than doubled between 1842 and 1880.

In the second half of the 19th century, numerous briquette factories continued to emerge around Meuselwitz, the center of the Meuselwitz-Altenburg lignite mining area . Large opencast mines existed until 1968 mainly in the west, north and east of the city with the opencast mines Zipsendorf-West and South , Ruppersdorf and several open-cast mines with the name Phoenix . As a result, the places Rusendorf and Ruppersdorf and part of Schnauderhainichen disappeared in today's urban area . In the 1980s, the resumption of lignite mining was planned, but this was not carried out. Several places in the east and south of Meuselwitz would have had to give way to the planned “opencast mine Meuselwitz” between Meuselwitz and Rositz. After the renaturation of the opencast mines, the Rusendorfer See and the Hainbergsee emerged in the vicinity of Meuselwitz.

Since the local elections on May 26, 2019 , the city ​​council has been composed as follows:

Blazon : “Divided by a silver bar from black over blue and shows a silver mallet crossed with a silver hammer at the top and a golden archer at the bottom. The coat of arms is covered by a silver, red-lined, gold-crowned Spangenhelm, on it a red linden leaf loop with four parallel red leaves, the helmet covers are gold-black. "

When it was granted city rights in 1874, the city had the established flag colors black and blue.

There is a city ​​partnership with the city of Lauffen am Neckar . 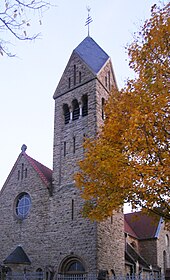 Other buildings worth seeing are the Martinskirche , the Zipsendorfer Church, the Catholic Church and the water tower. The mill pond, whose old town mill was demolished, and the grotto pond with the shell grotto are also worth a visit.

In Meuselwitz and its districts there are over 80 cultural and interest groups.

The regional soccer division ZFC Meuselwitz is based in Meuselwitz . Another football club is FSV Meuselwitz, whose men's team plays in the district league. This club also has an active running and triathlon section. There has been a handball team in Meuselwitz since 1922. The men's team of today's Meuselwitz handball club , which emerged from BSG Motor Meuselwitz , plays its games in the Schnaudertalhalle. In addition, the traditional shooting club PSG Meuselwitz is active in the city .

Headquarters of the company Glass

Structural companies of the Meuselwitz business location are z. B:

On April 18, 1872, Meuselwitz received a rail connection with the opening of the Altenburg-Zeitz railway, on September 7, 1874 the railway to Leipzig (Meuselwitz-Gaschwitz) and October 17, 1887, the Meuselwitz – Ronneburg railway was opened. When the Zwenkau and Groitzscher Dreieck opencast mines opened up, the route to Leipzig between Lucka and Groitzsch was interrupted and removed in the 1970s. At the beginning of 2004 the passenger traffic between Altenburg and Zeitz was stopped. On the Zeitz ( Profen ) and Meuselwitz section, coal trains were still running until 2013 to supply the power plant in Mumsdorf and a few trains to the Kriebitzsch gravel recycling plant.

Thus, all of these routes are closed. The Meuselwitz – Haselbach – Regis-Breitingen coal railway is used as a museum.

In Meuselwitz there is a primary school, a regular school , the Veit-Ludwig-von-Seckendorff-Gymnasium (European school) and the drama school of the Thuringia Media Academy, a state-recognized supplementary school.

Districts of the city of Meuselwitz