The state was created on May 1, 1920 from a merger of the Thuringian Free States of Saxe-Weimar-Eisenach , Saxe-Meiningen , Saxe-Altenburg , Saxe-Gotha , Schwarzburg-Rudolstadt , Schwarzburg-Sondershausen and the People's State of Reuss . The Free State of Coburg, however, joined Bavaria . An integration of areas from the Prussian Thuringia could not be realized despite various efforts. The centuries-long era of strong territorial fragmentation came to an end in the Thuringian and northern Franconian regions. The state capital was Weimar , the largest city Gera .

The state coat of arms goes back to a law of the state parliament of April 7, 1921. The coat of arms shows seven silver stars on a red background; the stars stand for the seven individual states that made up Thuringia in 1920.

In 1933 the country received a new coat of arms under the National Socialist government, as the stars were too reminiscent of the Jewish Star of David . The state coat of arms awarded by the National Socialists showed a colored lion in the middle (symbol of the Landgraves of Thuringia) with the swastika in the right paw; Above were the Saxon diamond wreath (symbol of the Ernestine regions) and the Schwarzburger eagle. The Reussian lion and the hen from the Henneberger were shown below. This coat of arms was used from 1933 to 1945. Authorities only used the heart shield as a small national coat of arms. The coat of arms was designed by the Altenburg painter Ernst Müller-Gräfe . Because of its symbols it was also derided as the "Thuringian Zoo".

After the Second World War, a golden lion was used on a red background. The lion was surrounded by eight silver stars, which symbolized the eight parts of Thuringia. The eighth star stands for the Prussian territories incorporated in Thuringia in 1945. The stars as a symbol of the unity of the country have been preserved in the state coat of arms to this day.

The big state flag bears the national colors white-red and shows the national coat of arms in the white stripe on the left (ordinance of April 25, 1922, section III, paragraph 2).

As early as the end of 1918, the governments of the Thuringian Free States, including the Free State of Coburg, started negotiations on an amalgamation of all, if possible including the Prussian parts of the territory. Since the Free State of Prussia was not prepared to change its territory, the establishment of the state was promoted in 1919 as the so-called “Little Thuringia solution”.

In the course of the founding negotiations, the state governments of Sachsen-Meiningen and Sachsen-Coburg expressed concerns about whether a connection to the state to be formed would be advantageous; because the area south of the Rennsteig , which is more Franconian , has always felt linguistically and nationally more closely linked to the Franconian areas that have belonged to Bavaria since the Reichsdeputationshauptschluss of 1803 . The concerns of Saxony-Meiningen could be dispelled (among other things by a guarantee for the IHK Sonneberg and for the districts). The Free State of Coburg decided in a referendum on November 30, 1919 with 88 percent against an annexation to Thuringia, whereupon the unification with the Free State of Bavaria was completed on July 1, 1920 .

By the imperial law of April 30, 1920 (RGBl. I p. 841), the seven people or free states, excluding the Coburg area, were finally united on May 1, 1920 to form the state of Thuringia with an area of ​​11,763 km². The first state coat of arms had seven stars on a red background, which symbolized the former Free States. Weimar became the capital . The Constitution of the state of Thuringia , which was adopted on 11 March 1921 and the Community Treaty of 1919 were of the Jena deputies of the DDP , Eduard Rosenthal , designed.

In Thuringia, too, the Weimar Republic was marked by political turmoil. In October 1923, the Social Democrats under August Frölich formed a government together with the KPD . However, the "workers' government" broke up a little later after the invasion of the Reichswehr as a result of major political differences.

From January 1930 to April 1931 there was the first Volkisch National Socialist government in Germany in the state of Thuringia, referred to as the Frick government after its National Socialist Interior Minister Wilhelm Frick , and as early as 1932 the NSDAP, with its Gauleiter Fritz Sauckel as the leading minister of state, was in control of the government alone Make land.

The country was represented externally by the chairman of the State Ministry. Between 1920 and 1945 these were: 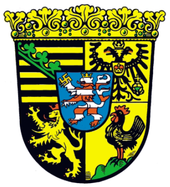 After the transfer of power to Adolf Hitler in early 1933 took place the DC circuit of the countries. The first so-called protective custody camps were set up in Nohra and Bad Sulza (both in the Weimar district ) to persecute political opponents . Despite persecution by the Nazi terror apparatus, resistance to National Socialism also developed to varying degrees . The previous Prime Minister Fritz Sauckel became Reich Governor and his successor Willy Marschler (NSDAP). With the law on the rebuilding of the Reich of January 30, 1934, the state of Thuringia lost its statehood. The state capital Weimar became the Gau capital; the “ Gauforum Weimar ” is used today by the Thuringian state administration office . The territorial structure of the NSDAP district of Thuringia was based on the structure of the Reichstag electoral districts in the Weimar Republic and therefore also included the administrative district of Erfurt and the district of Herrschaft Schmalkalden, which in 1944 were actually connected to Thuringia for administrative purposes (see below, Chapter # Area changes ) . The Buchenwald concentration camp near Weimar was established in 1937 . In 1943 the Dora-Mittelbau concentration camp in the Prussian administrative district of Erfurt was added (initially as a subcamp of Buchenwald and from 1944 as an independent camp).

During the Second World War, Thuringia was less affected by air raids than other areas in Germany . The cities of Nordhausen , then part of Prussia like Erfurt, and Creuzburg (strategically important Werra crossing) were almost completely destroyed (due to the Mittelbau-Dora concentration camp and armaments factory there ); There was major damage in Jena and Gera, among others . About 10% of Erfurt was destroyed.

The state of Thuringia was characterized by rural areas. In September 1922 there were 91 towns and in 2013 there were towns (municipal districts), plus 93 uninhabited districts - most of them in the district of Meiningen. There were no large cities and, as the following table shows, 22 medium-sized cities that had more than 10,000 inhabitants in the 1930s. Gera was the largest city in the country. Weimar, the third largest city and former capital of the largest Thuringian Free State of Saxony-Weimar-Eisenach, became the new state capital. Today's capital Erfurt and a few other larger cities were on Prussian territory and therefore did not belong to the state of Thuringia.

See also : History of the administrative structure of Thuringia

With the law on the administration of the former Thuringian states in the transitional period (transitional law) of December 9, 1920, the seven former Thuringian free states were converted into self-governing municipal associations of a higher order . From then on, they were referred to as "areas" and each had an area representative and an area government to which general state administrative tasks were assigned. The areas of responsibility were gradually ceded to the state through a series of laws: first on March 15, 1921, the district and community supervision, then the forest supervision (May 1921), the road system (June 1921), commercial, traffic and health and mining (July 1921), police, immigration and emigration (August 1921), state civil engineering (September 1921), administration of justice (October 1921), education (March 1922), state property (October 1922) and finally on February 1, 1923 the land registry and surveying. As of March 31, 1923, the areas were abolished as higher municipal associations. The special status of the former principalities was also laid down in the constitution. According to § 71, each of the predecessor states had to be represented by a member in the state government for the first 15 years after the constitution came into force. A Council of State ( minister without portfolio ) was appointed for each area from which no minister came .

In October 1922, a regional reform was carried out, in which 10 urban and 16 rural districts (including the Camburg district department ) were formed. The districts were divided directly into places (municipality districts and uninhabited districts); They have been summarized in district court districts , whose allocation to the individual districts can be seen in the right part of the table below. The stated population figures refer to June 16, 1925, when the first census took place after the creation of the state of Thuringia.

¹) By state law of March 16, 1939, the Camburg district department was incorporated into the Stadtroda district on April 1, 1939.
²) The district of Stadtroda was still called Jena-Roda in 1922 (source: the new district division of the state of Thuringia from 1922 )

In 1928 there was an exchange of territory and a border adjustment between the Free State of Saxony and the State of Thuringia. Altogether 1778 hectares with 2900 inhabitants came to Thuringia (mainly in the southern area around Gera; among others the communities Bocka , Liebschwitz , Rückersdorf , Thonhausen ) and 1115 hectares with 4890 inhabitants to Saxony (mainly in the area around Crimmitschau and Limbach-Oberfrohna; among others the communities of Rußdorf and Waldsachsen ).

End of the Second World War, Soviet Zone and GDR 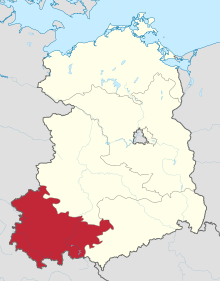 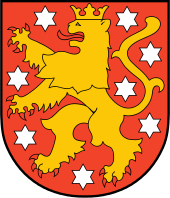 Thuringian coat of arms until 1952

At the end of March 1945 the Western Allies approached Thuringia. Despite the near end of the war, NS officers ordered the "Trutzgau Thuringia" to be defended to the last man; the “Werra Line” west of Eisenach should be kept under all circumstances. As a result, on April 1st, between Treffurt and Gerstungen, there was fighting by the Volkssturm , Hitler Youth and holidaymakers from the front against the advancing US troops, which claimed around 350 lives and in which around 85% of the small town of Creuzburg was destroyed. With that began the capture of Thuringia; Within around two weeks the whole country was occupied by the Americans. Before that there had been heavy bombing raids on Gera on April 6th.

Due to the Allied agreements of Yalta , the state of Thuringia was occupied by Soviet troops between July 2 and 6, 1945, with the exception of the Ostheim exclave in front of the Rhön . The country, now part of the Soviet occupation zone (SBZ), was enlarged to include the Prussian administrative district of Erfurt to 15,585 km², and it was given a new constitution. The community of Ostheim vor der Rhön was incorporated into Bavaria in 1945 by order of the American military government.

The Thuringian state parliament was elected in the semi-free state parliament elections in 1946. After the political parties were brought into line with block parties , he was determined according to uniform lists in the unfree state elections in the GDR in 1950 . With the reorganization of the GDR into districts , the country lost its function in 1952. In 1958 it was finally dissolved. The area of ​​the country now essentially formed the districts of Erfurt , Gera and Suhl .

Countries of the German Democratic Republic (until 1952)