Adolf von Pommer Esche , Upper President of the Rhine Province from 1858 to 1871

Gustav Noske (SPD), Upper President of the Province of Hanover from 1920 to 1933 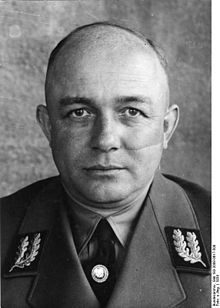 Helmuth Brückner (NSDAP), Upper President of the Province of Silesia 1933/1934

Oberpräsident (actually: Oberregierungspräsident ) was the official title of the highest administrative officer in the Prussian provinces . Despite unclear and changing competencies, the office of an administrative lawyer was the culmination of a career. As often as senior presidents were appointed to political leadership roles, so often dismissed politicians were given the honorable office.

The chief president of a Prussian province was the highest representative of the Prussian crown in the province. As early as the 17th and 18th centuries he was appointed by the elector or king and was only responsible to him.

From 1808 and 1815 the high president exercised the right of inspection, the supreme supervision of the administration in his province, on behalf of the king. However, he was not the superior of the regional presidents , who were directly subordinate to the Prussian Ministry of the Interior in Berlin. The high president had the right to be informed by the regional president about all matters of the province, he was able to inspect all administrative processes and was allowed to intervene himself in case of danger. He exercised an important rule of law control over the district president and the administration . He had immediate law and was only subordinate to the Prussian Prime Minister. Only a small staff of employees was available to him to carry out his task. In terms of duties and powers, he was the civil equivalent of a Prussian general stage manager .

Under National Socialism , the powers of the upper presidents were expanded. They then also perceived imperial interests, similar to the powers of an imperial governor . The Prussian Provincial Council was also set up as an advisory body . The conflict between the powers of the Oberpräsident and the district president was not resolved until 1945.

Seats of the Prussian upper presidents

The Prussian upper presidents had their seat in the following provincial capitals:

The Lord Mayors of Berlin had been on an equal footing with the Lord Presidents since 1881.