The province of Brandenburg was formed in 1815 and comprised the Mark Brandenburg including the Neumark east of the Oder , but excluding the Altmark west of the Elbe, which had been connected to the province of Saxony . Lower Lusatia also belonged to the province of Brandenburg . The seat of the Upper Presidium (= state provincial government, headed by the Upper President , for which there is no comparable institution today) was initially Potsdam , from 1827 to 1843 Berlin, from 1843 to 1918 Potsdam and from then until 1945 Berlin-Charlottenburg.

As decided at the Potsdam Conference , in 1945 the area of ​​the province east of the Oder-Neisse line was placed under Polish administration and is now part of Poland . The rest of the province was confirmed in June 1945 as the province of Mark Brandenburg in the Soviet zone of occupation . On February 6, 1947, the province went on in the new state of Brandenburg , which had been established as a member state of the future German Democratic Republic (GDR). The Free State of Prussia was dissolved shortly afterwards on February 25, 1947 by the Control Council Act No. 46 .

The population of the province was significantly reduced both in 1881 through the spin-off of the city of Berlin and in 1920 through the expansion of Berlin . 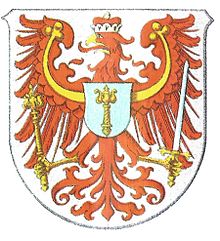 Coat of arms of the province of Brandenburg

Blazon (without shield holder ): In the silver field a red, gold-armored, red-tongued eagle adorned with the electoral hat . In the right claw he holds a golden scepter, in the left a gold-tipped sword. The wings are decorated with golden clover stems. On the chest is a blue heart shield , in which an upright golden scepter (arch chamberlain) appears.

In the crowned helmet an open black eagle flight covered with golden clover stalks and on the Saxons with golden hearts. The ceilings are black and gold.

Until 1939 the districts were called Kreise

1 from 1912 already listed with the addition of Berlin .

Since then, provinces have had a dual nature and dual governing bodies, on the one hand as a subdivision of the central state, and on the other hand as a regional body ( provincial association ) of higher-order local self-government. District assemblies and city councils elected the members of this state assembly. The provincial parliament elected a provincial government, the provincial committee , and a provincial head, the provincial director .

Elections to the provincial assembly

(To 100% missing votes: nominations not represented in the provincial assembly)