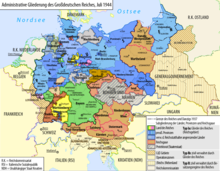 The newly created province of Kurhessen on July 1, 1944 consisted of the previous administrative district of Kassel minus the districts of Hanau, Gelnhausen and Schlüchtern, the then independent city of Hanau, which had to be ceded to the new province of Nassau, and the previously Kurhessian district of Schmalkalden became part of the Prussian Erfurt administrative district. The seat of the new high presidium was the previous regional council in Kassel, the previous regional president held the function of a deputy to the high president in 1944/45. On September 19, 1945, Kurhessen was combined with Nassau (excluding the western part around Montabaur), Upper Hesse and Starkenburg to form the new state of Greater Hesse (today's state of Hesse ) by decree of the US military government .

Districts in the province of Kurhessen 1944/45