Hohenzollernsche Lande ( Hohenzollern for short , officially Hohenzollern Lands since November 19, 1928 ) referred to the Prussian administrative district of Sigmaringen . It existed with numerous exclaves from 1850 until the dissolution of the Free State of Prussia after the Second World War . Almost all the rights of a Prussian province - including representation in the Prussian State Council  - had been transferred to the district; the district president was treated like an upper president. However, numerous administrative matters were incumbent on the Rhine Province .

The "Administrative Region Sigmaringen" was formed in 1850 when the two former principalities of Hohenzollern-Hechingen and Hohenzollern-Sigmaringen fell to Prussia. The two princes had previously abdicated in the course of the revolution of 1848/49 in Germany and their countries on December 7, 1849. Both ruling houses had inheritance contracts with Prussia since 1695 and 1707 respectively.

The Prussian King Friedrich Wilhelm IV initially hesitated to take over the two principalities. His historian Rudolf von Stillfried-Rattonitz then made it clear that in the event of rejection, the Swabian princes "inevitably had to throw themselves into the arms of the 400-year-old Württemberg ... hereditary enemies", a disgrace that the king could not tolerate. In May 1849, the King approved a treaty on the Anschluss, which was signed on December 7, 1849. The possession by the Prussian state took place on April 6, 1850 in Sigmaringen and on April 8 in Hechingen. Thereafter, the two principalities were combined to form an administrative district with the administrative seat in Sigmaringen .

During the German War , from June 27 to August 6, 1866, it was occupied on behalf of the German Confederation by Württemberg troops .

With the formation of provincial associations , the Hohenzoller Lands also got self-administration, the state communal association of the Hohenzoller Lands , for which a communal parliament was elected. Both existed until 1973, when the Hechingen and Sigmaringen districts in Hohenzollern were dissolved in their previous form . The court of appeal was initially the court in Arnsberg until 1879 . Thereafter the higher regional court in Frankfurt am Main was responsible. The higher education system and the medical system were subordinate to the High Presidium of the Rhine Province.

The administration of the Sigmaringen administrative district, which performed the tasks of the state government, was initially divided into the seven Hohenzollern regional offices of Gammertingen , Haigerloch , Hechingen , Ostrach , Sigmaringen , Trochtelfingen and Wald . In 1925 the upper office districts of Gammertingen, Haigerloch, Hechingen and Sigmaringen, which still existed at that time, were merged into the two new higher offices of Hechingen and Sigmaringen . At the time of National Socialism , the area belonged to the NSDAP- Gau Württemberg-Hohenzollern under Gauleiter and Reichsstatthalter in Württemberg Wilhelm Murr , who was also assigned more and more state tasks ( Reich Defense Commissioner in Wehrkreis  V 1939; Leader of the Volkssturm 1944), but remained formally a Prussian government district. A Reichsgau Württemberg-Hohenzollern no longer came about. 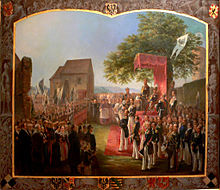 Hereditary homage to King Friedrich Wilhelm IV on the Hohenzollern on August 23, 1851

Emblem of the Hohenzollern Lands, as it was set up on the borders in the Free State of Prussia

(with the powers of an upper president )

District President in the Hohenzollern Lands