The Rottweil district is a district in Baden-Württemberg . It belongs to the Schwarzwald-Baar-Heuberg region in the Freiburg administrative region .

The district borders clockwise in the north, beginning with the districts of Freudenstadt , Zollernalbkreis , Tuttlingen , Schwarzwald-Baar-Kreis and Ortenaukreis .

→ Main article : List of nature reserves in the Rottweil district

The Rottweil district has the following nature reserves . According to the protected area statistics of the State Institute for the Environment, Measurements and Nature Conservation Baden-Württemberg (LUBW), 437.31 hectares of the district are under nature protection, that is 0.57 percent.

The core of the district of Rottweil goes back to the Oberamt Rottweil established in the Kingdom of Württemberg . After the Napoleonic Wars - after the mediatization of the formerly free imperial city of Rottweil in 1803 - this upper office was rewritten with the organizational edict of 1806 by Duke Friedrich II of Württemberg, who later became King of Württemberg. Essential for its constitution in terms of administrative law, however, is only the Maucler Organizational Edict issued in 1818 with the separation of justice and administration as well as office and official city.

In 1807 the Oberamt Sulz was established from the Oberamt Dornhan , parts of the Oberamt Rosenfeld , and in 1810 the Oberamt Oberndorf . After their dissolution in 1938, the administrative district of Rottweil was created out of these upper offices, which were renamed administrative districts in 1934. The Rottweil district was enlarged to include the majority of the Oberndorf district (five communities came to the Freudenstadt district ), some places in the Sulz district - the larger part was added to the Horb district - and individual communities in the Tuttlingen and Spaichingen districts. However, he also gave some places to the Balingen district .

Previously, on January 1, 1972, the Rottweil district ceded the town of Schwenningen am Neckar to the Villingen-Schwenningen district.

The community of Schörzingen was assigned to the Zollernalb district on February 1, 1973 . Deißlingen returned on January 1, 1974. Busenweiler was added on April 1, 1974 from the Freudenstadt district.

On July 1, 1978 there was an exchange of territory between the cities of Schiltach and Wolfach ( Ortenaukreis ).

On May 1, 2006, the municipality of Tennenbronn was incorporated into the city of Schramberg . The district of Rottweil now comprises 21 municipalities, including 6 towns and of these, in turn, 2 " large district towns " (Rottweil and Schramberg). The largest city is Rottweil, the smallest municipality is Schenkenzell.

In the Rottweil district, a meeting of 25 women in the old church in Fluorn-Winzeln in the run-up to the first regular Green Party Congress in 1980 formulated a declaration on equality between men and women. It leads to the decision of the party on the equal representation of the state executive board and all offices and mandates with men and women according to the zipper principle.

The population figures are census results (¹) or official updates from the Baden-Württemberg State Statistical Office (main residences only).

The district council is elected for five years by those entitled to vote in the district. The local elections on May 26, 2019 led to the result shown in the diagrams.

The Oberamtmen of the former Oberamt can be found in the article Oberamt Rottweil .

The coat of arms of the Rottweil district shows in gold a red-tongued and red-armored black eagle, covered with a breast shield divided by silver and red, holding a lying deer pole with the ends turned down in its claws. The coat of arms was awarded on June 7, 1974 by the Ministry of the Interior of Baden-Württemberg .

The imperial eagle stands for the formerly free imperial city of Rottweil, the stag pole for the Württemberg areas of the district and the split breastplate for the areas of the Counts of Hohenberg, which later belonged to Front Austria .

See also: List of coats of arms in the Rottweil district

In the Future Atlas 2016 , the Rottweil district was ranked 153rd out of 402 districts, municipal associations and urban districts in Germany, making it one of the regions with a “balanced risk-opportunity mix”. In the 2019 edition, it was ranked 77th out of 401.

In 1928 the Deutsche Reichsbahn opened a branch line from Rottweil via Schömberg to Balingen .

In the north-west of the district, a small railway junction was created in Schiltach when a branch line to the clock town of Schramberg branched off from the Hausach – Freudenstadt Kinzig Valley Railway, which was opened in 1886 . The builder was the Badische Staatsbahn for the Hausach – Schiltach section and the Württembergische Staatsbahn for the remaining sections.

Of the total network of 90 kilometers in length, 21 kilometers have now been shut down for passenger and freight traffic:

On the routes from Rottweil to Villingen and Tuttlingen, in addition to DB trains, motor coaches of the Hohenzollerische Landesbahn AG have been running since September 1, 2003 as part of the Schwarzwald-Baar-Heuberg ring train concept.

The federal motorway 81 Stuttgart - Singen (Hohentwiel) runs through the eastern district . Furthermore, several federal, state and district roads open up the district. The most important federal highways are the B 14 Stuttgart - Stockach , which runs through the district from north to south along the Neckar , the B 462 Freudenstadt - Rottweil , which comes from the northwest and then crosses the district eastwards, and the B 27 coming from Tübingen leads to Villingen-Schwenningen and Schaffhausen in Switzerland.

Since 2017, so-called rider benches have been set up in the municipalities of the district according to the motto thumbs out.

The district operates its own district archive. The culture and museum center Schloss Glatt is a cultural institution of the district of Sulz a. N. and district borne together. 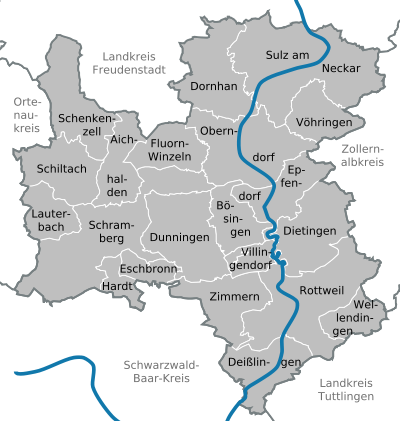 Municipalities before the district reform

Before the district reform in 1973 or before the community reform , the (old) Rottweil district had a total of 53 communities since 1938 , including 4 towns .

The largest municipality in the old Rottweil district was the town of Schwenningen am Neckar, which has been a major district town since April 1, 1956 . The smallest community was Goesslingen.

The old district of Rottweil included last an area of 558 square kilometers , and had in the census in 1970 a total of 138,468 inhabitants.

The table shows the population development of the old Rottweil district up to 1970. All population figures are census results.

Rottweil district before the district reform

On July 1, 1956, the district was assigned the distinctive sign RW when the vehicle registration number that is still valid today was introduced . It is still issued today.

Counties and independent cities (1938–1972) in Baden-Württemberg