Lauterbach is a municipality in the Rottweil district in Baden-Württemberg . The municipality has had the rating climatic health resort since 1884 .

Lauterbach is located in the Middle Black Forest at an altitude of 540 to 887 meters in the Lauterbach valley , a tributary of the Schiltach . The town hall is at 568 m. Lauterbach includes the Sulzbach high valley, which is between 700 and 900 m above sea level. NHN lies. Sulzbach was never an independent municipality, but is just a collection of different places to live, e.g. B. the Rotwasser and the Bruckhof. The area is actually called Sulzbachtal and not Sulzbach, but at some point it was only called Sulzbach [Lauterbacherisch: Sulzbâ] because of the river of the same name that flows through the Sulzbachtal in the direction of Lauterbach. The area south, west and north of Lauterbach is very sparsely populated.

The community borders in the north on the city of Schiltach (district Lehengericht ) and on the city of Wolfach (district Kirnbach ) in the Ortenaukreis ; in the east to the large district town of Schramberg ; in the south to the Schramberg district of Tennenbronn , which has belonged to Schramberg since 2006. To the west, Lauterbach borders the town of Hornberg ( Reichenbach district ), also in the Ortenau district, from which it is separated by the Mooswaldkopf . Lauterbach is separated from the Baden community of Gutach in the Ortenau district by a short strip that belongs to the town of Hornberg . With the exception of Schramberg, all of the neighboring towns of Lauterbach in Württemberg were Baden until the merger of Baden-Württemberg . It is around 33 kilometers to the district town of Rottweil, around 30 kilometers to Villingen-Schwenningen, around 40 kilometers to Freudenstadt, around 55 kilometers to Freiburg and around 55 kilometers to Offenburg.

The center of Lauterbach with the neo-Romanesque church of St. Michael 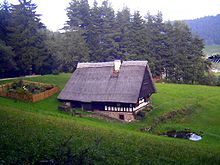 The Lauterbach community includes the village of Lauterbach and 38 other villages, hamlets, farms and houses.

See also : List of places in the Rottweil district

The municipal area is 1995 hectares, of which 1098 hectares are forest area (55%), 37% are used for agriculture, the rest are traffic areas and buildings. Because the town center is embedded in the Lauterbach valley, the development reached its limits some time ago, which is why further houses can only be built in the outskirts or on the Fohrenbühl and in Sulzbach.

The historic Mooswaldmühle in Sulzbachtal on the German Milling Day 2009

The first (but controversial) written mention of Lauterbach was in 1101 . Lauterbach belonged to the Schramberg lordship and was sold together with her to Habsburg in 1583 . From then on, Lauterbach was Austrian for 222 years (1583–1805) .

After Napoleon's victory over the Austrian (and Russian) emperors in the Battle of the Three Emperors of Austerlitz (December 1805), the area fell to Württemberg. It was assigned to the Oberamt Oberndorf .

Attempt to incorporate to Schramberg

In 1997/98 Schramberg and the then majority faction in the Lauterbach local council UBL wanted to bring about the incorporation of Lauterbach. To this end, a referendum was carried out in Lauterbach on March 1, 1998 , in which over 75% of the voters spoke out in favor of the independence of their community.

Lauterbach is a largely Roman Catholic village. It was not until the beginning of the 20th century that Protestants came to the village and founded a Protestant community in 1959 . This belongs to the parish of Sulz am Neckar of the Evangelical Church in Württemberg .

Nevertheless, Catholics still make up the majority of the population with around 80%. Since 2006 the retreat house Porta Caeli of the Priestly Society of St. Pius X has been located in the former Berlin house .

The community belongs to the agreed administrative community of the city of Schramberg. In Lauterbach, the CDU is the leading party; In the 2005 Bundestag elections, over 60% voted for the CDU and less than 20% for the SPD.

After the local elections on May 25, 2014, the municipal council has twelve members in addition to the mayor as chairman. From 1975 to 2014 the local council had 14 members.

In September 2014 Norbert Swoboda was confirmed in office with 94% of the votes. This begins his third term of office.

Today's coat of arms shows two controversial scythes turned away from each other (also called Breschmesser or Kuse, French Couse ) in white (silver) on a blue background. It comes from the coat of arms of the barons, imperial counts of Bissingen-Nippenburg since 1746 , who owned the Schramberg rulership as pawns since 1648.

The place is on the German Clock Route and the Mittelweg long-distance hiking trail , both of which lead past many sights.

Numerous clubs and associations shape the cultural and sporting life in the community.

In Lauterbach, as in the whole Swabian-Alemannic region, the carnival is celebrated. One of the highlights is the call of witches, which always takes place on the "Schmotzigâ" . The Lauterbacher rabbits are the Stumphos', the Beerle-Ma and the Hochsteighexe. For the 60th anniversary of the Lauterbach fool's guild in 2009, the Büttel was launched and now leads the guild at all appearances and events. The Lauterbach's foolish saying is "Eerle - Beerle".

Kilbe is sung in Lauterbach in mid / late October . This refers to an old tradition from the time of the Schramberg rule. The Kilbe is only celebrated in the Schramberg area. The children run through the streets with lanterns and sing “Kilbelieder”. Then they get Gutsle , sweets or fruit, mainly oranges and mandarins. - However, the custom is increasingly giving way to Halloween.

As industrialization progressed in the 19th century, Lauterbach developed from a farming village to a workers' community. The Lauterbach found work primarily in the watchmaking industry in the neighboring town of Schramberg, but small and medium-sized businesses also sprung up locally. Today's largest company in the area, the Bock Kunststofftechnik company, emerged from a comb factory . However, compared to other places the industry is rather underdeveloped and the commuter balance is still negative.

An important branch of Lauterbach's economy is still tourism, which experienced its high phase after the Second World War until the 1980s. There are several hotels and many private guest houses in Lauterbach. 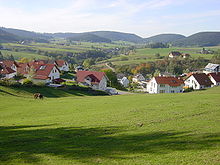 The higher-lying district of Sulzbach is scenic

The nearest train stations are Hornberg on the Black Forest Railway , and Wolfach and Schiltach on the Kinzig Valley Railway operated by the Ortenau S-Bahn .

The municipality of Lauterbach shares with the municipality of Hornberg the Fohrenbühl pass , on which the border between the Habsburg rule Schramberg and the Württemberg Hornberg - and then the border between the Kingdom of Württemberg and the Grand Duchy of Baden - ran until 1805 . Not far from the Fohrenbühl pass is the Mooswaldkopf , which at 880  m is one of the highest mountain peaks in the central Black Forest .

Wikisource: Lauterbach in the description of the Oberamt Oberndorf from 1868  - sources and full texts

Cities and municipalities in the Rottweil district