This article deals with the musician, for the mathematician see Giuseppe Torelli (mathematician) 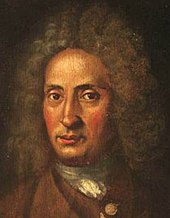 Giuseppe Torelli was one of the most important Italian composers and violinists of the late 17th century. He came from a respected family of artists and probably received his education around the cathedral orchestra of San Petronio in Bologna. He studied composition with Giacomo Antonio Perti and, after a rigorous examination, became a member of the Bolognese Accademia Filarmonica at the age of 26 . From 1686 he was a violist in the Bologna Orchestra. In 1698 he became conductor of the court orchestra of the Margrave of Ansbach . In 1699 and 1700 he worked in Vienna and from 1701 until the end of his life back in Bologna.

His work had a great influence on the development of the Concerto grosso . He also introduced the three-movement form of the concerto (fast, slow, fast), which was later generally adopted. His oeuvre comprises seven opus series with a total of 84 well-known works.

Around 1700 he introduced a violin soloist to make music with the orchestra, a groundbreaking innovation at the time compared to the Concerto grosso, where a soloist group was used. The model was the opera aria that had appeared a hundred years earlier. Torelli wrote mainly sonatas , concerti grossi and solo concerts .