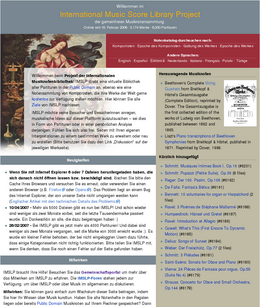 The International Music Score Library Project ( IMSLP , German  International Music Library Project ), also subtitled in July 2008 Petrucci Music Library , Ottaviano Petrucci dedicated is a project to create a virtual online library for public domain (public domain) music ( Free Sheet music ). The IMSLP was founded by Edward W. Guo, a music student at the New England Conservatory of Music . It works on the same wiki principle that Wikipedia is based on. Since it went online on February 16, 2006, over 152,000 works (495,000 music files) by over 18,000 composers have been uploaded to December 2019 . The project is the largest online collection of free and free sheet music. It also contains 59,000 recordings.

On December 27, 2015, Edward W. Guo announced that a subscription-based payment system would be introduced. Since then, PDF files can only be downloaded after a waiting period of 15 seconds. According to Guo, this waiting time should stimulate the user to think about the fact that running a free offer costs money and that too few donations are received in order to secure the stock of notes available on IMSLP. The IMSLP founder was allegedly suggested to this change at the international conference of music libraries (IAML / IMS) in June 2015. In defense of the introduction of a fee-based membership, he points out that sheet music can still be downloaded without payment and people who are To significantly engage in IMSLP, a free membership is offered. The innovation was z. Partly noted with regret and also criticized in terms of content.

The IMSLP mainly contains scans of old editions of music that are no longer subject to copyright , unlike the Mutopia project , which only contains new notes created on the computer . In individual cases, the copyright or copyright may have expired only in the United States or Canada , and not in other countries. The project is also of interest from a musicological point of view, as there are often several different, sometimes historical editions of a work available.

In addition to sheet music in the public domain, sheet music by contemporary composers who are under a Creative Commons license is also permitted . A musical exchange of ideas on the discussion pages on the individual pieces of music is explicitly desired. A multilingual discussion forum is also available.

One of the main projects of IMSLP was the sorting and uploading of the complete works of Johann Sebastian Bach in the edition of the old Bach Society (1851–1899). On November 3, 2008, this project was declared complete.

In October 2007, the founder of the project temporarily closed the website after receiving a cease and desist notice from Universal Edition Vienna , which believed that their copyright had been infringed. Since June 30, 2008 the project has been carried out by Project Petrucci LLC based in Wilmington , Delaware .

In July 2010 the IMSLP EU project went into operation. The independent project consists of servers with EU locations. This allows European visitors to view files that are free of rights in Europe, but not in Canada or the USA.